If I've found my favorite little-known hotel, I shouldn't be telling you. But then it cannot be such a big secret as Anthony Bourdain (chef, author and TV personality), John Madden (director of Shakespeare in Love and the Best Exotic Marigold Hotel), and Josh Hartnett (actor, Pearl Harbor) have already plumped for its lava-filled bedrooms. This is Monaci delle Terra Nere, a new-ish (two years old) boutique hotel that's off -the- beaten- lava track in the foothills of Mt Etna, Sicily. 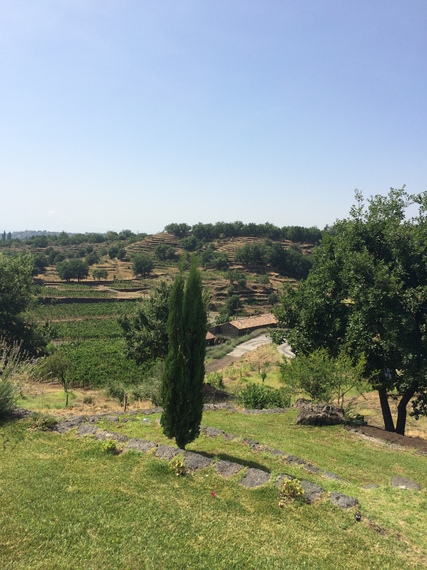 VIEW FROM THE HOTEL

Mt Etna blows its top theatrically behind, red molten lava slipping dramatically down its slopes, and the Ionian sea twinkles in front.

And the hotel's in a 40-acre private organic estate that's being planted with enough trees to save the planet and make the chef's wizard jams.

The gods (and monks) must have been smiling the day Guido Coffa (a softly -spoken erstwhile automotive engineer) fell in love with the main building: a 19th century putty- pink villa. (It was a piano nobile turned winery then organic farm.) His girlfriend, Ada Calabrese, then created achingly stylish interiors with squishy B&B Italia sofas and floating beds against walls of blackest volcanic rock and soaring wood-beamed ceilings - making a eco hotel of 15 bedrooms/suites, some dotted on the estate. 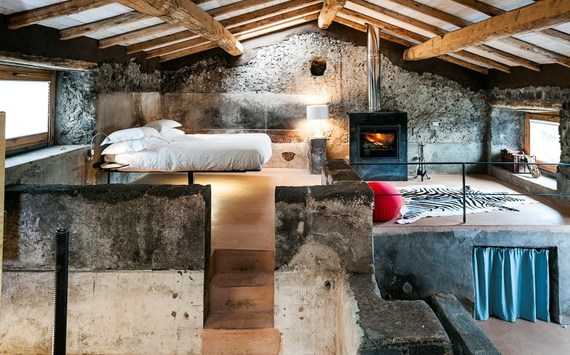 It's a fantastico experience from the first moment of arrival - when my husband and I set foot in the cavernous reception area that houses the original antique 'palmento' grape press. And an even more splendido experience when we bag the romantic Suite Amabile with its crater views and a freestanding bathtub by the bed.

It's hard to tear ourselves away from such a bedroom, but then there's the cuisine...

It's food that puts the 'oh' into slow-- sun-ripened tomatoes, just-plucked zucchini plus still-flapping fish with zero miles, cooked slowly and eaten leisurely.

(They grow 100 types of fruit and all their own veggies.)

Afterwards there's an outdoor bar for wine-- lava is not the only thing flowing around Mt Etna: sommeliers are now beating a path to its palmenti who are producing notable wines. There's also an infinity pool for lazy laps; yoga on the lawn; Cinema Paradiso under the stars (divinely the rooms are without televisions); and billiards at the Victorian table. 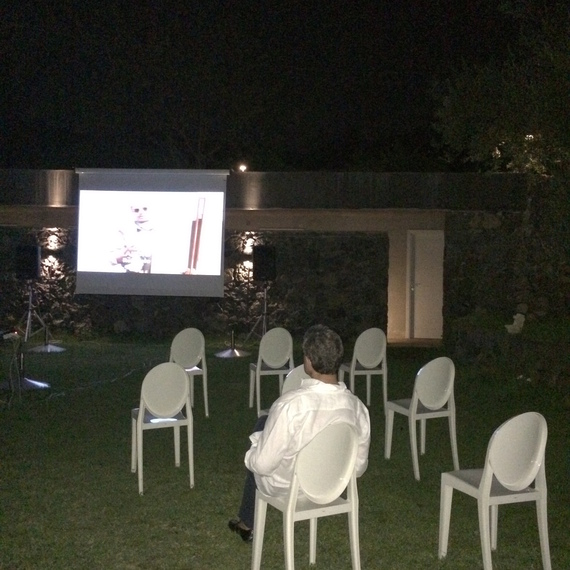 Monaci delle Terra Nere gets full marks and more for soul. The only hiccup? Those lava paths kill the Laboutins. But, yes, I think I've found one of my favourite hotels.

Award-winning freelance journalist who has contributed to most of the British nationals.