The evening before the #WomensMarch on Washington, over 50 individuals from diverse backgrounds board a bus in Chicago heading for our nation's capital. Christian, Muslim and Jain; men, women and youth; black, brown and white together settle in for the 12-hour trip ahead. Many of them had never gone to a march, none of them had protested in a rally at our nation's capital, but all of them had one thing in common: They yearned for social justice. By choosing to travel with a faith-based organization, Muslim Women's Alliance (MWA), these individuals valued religious freedom. This journey to the Women's March would be a milestone marker for many. 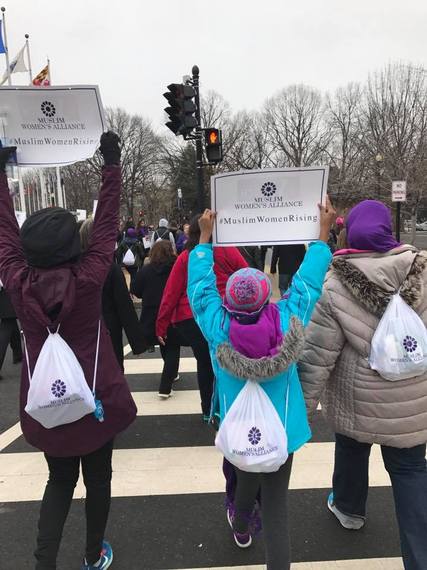 These protestors and those who joined around the globe affirmed their #WhyIMarch statements: From standing against sexual harassment in the workplace; to taking action as a man because simply "wishing" for equality is not enough. Some marched because they believed that none of us can move forward if half of us are held back; some protested for the sake of their undocumented mother. Others demonstrated because they insist on public education that affords quality schooling for all, and some were literally putting their feet down on the street to protect the future for their trailblazing daughters. On this particular bus, we also heard time and time again, "I march as an American Muslim Woman," and non-Muslim allies stood up to say, "I march in solidarity with my Muslim sisters." This unity wrapped the travelers like a warm, velvet blanket.

Truth be told, many were worried about their safety: Were they being irresponsible to loved ones by possibly putting themselves in harm's way at the protest? Despite the anxiety of this unchartered territory, they arrived in D.C. and were immediately enveloped in a sea of love. As Michael Moore pointed out at the rally, the powerful pink hats at the Women's March replaced the red caps from the Presidential Inauguration the day before. Now true strength was in the air. It is fitting that Leasha Prime, a rally speaker shared with the crowd the compelling teaching in Islam that states, "The womb of the woman is connected to the throne of God." Yes, indeed women have a special status.

Many Muslim women mustered up the courage to travel to Washington D.C. and participated in rallies around the world because of the leadership and example set by Linda Sarsour, one of the Women's March Co-Chairs. With her pure conviction, Linda declared to the over 500 thousand marchers in D.C. and 3 million around the globe, "I stand here before you unapologetically Muslim American...Sisters and brothers, you are what democracy looks like! You are the hope for my community. I ask you to keep your voices loud..." Linda and many other American Muslim women are role models who continue to push Americans and Muslim women in particular to be trailblazers. As Muna Odeh, a dynamic leader and MWA march organizer admitted, "Muslim women have historically been unapologetic fearless leaders and we won't change now."

Muna Odeh, one of the MWA leaders who organized the bus delegation to D.C.

"Often physical exercise is emphasized as most important to improve your health and to rejuvenate your body. This march was an emotional and mental rejuvenation," reflected Suroor Raheemullah, MWA Board Member. The results of this campaign had many in fear, but the global Women's March cultivated renewed faith in good. As Sadaf Syed, renowned photojournalist of the book "I Cover" noted, " I truly believe that this new presidency will be challenging but collectively as humans, ALL of our voices will be relevant." Zahra Billloo, a strong national voice echoed similar sentiments in her speech at the rally when she stated, "We are unafraid and will not be silenced. I and American Muslims like me are committed to putting our faith into action. We live and breathe the understanding that justice cannot be for just us, that our liberation is interconnected and that we cannot be free at each other's expense or when any of us remain targeted." 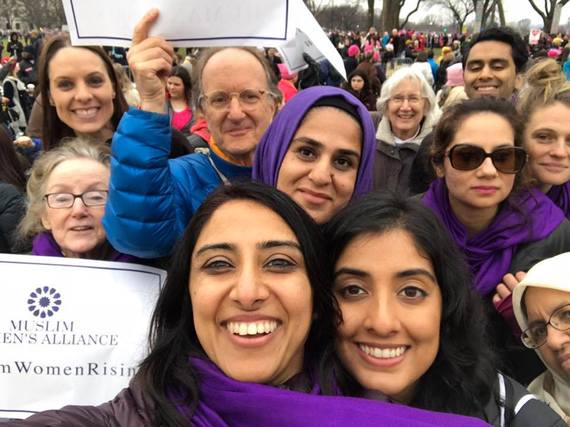 The strong sense of unity in diversity at the #WomensMarch in D.C. was truly heartwarming. The Muslim Women's Alliance marchers witnessed this sense of solidarity first hand. People from diverse backgrounds came up to our group of 55 marchers to tell us that they stand with us, they hugged us and cried when they witnessed us performing our prayer. We were deeply moved by these compassionate individuals some who approached us at the rally and asked to march with us in solidarity. They proudly held up our signs and composed creative chants in support of Muslims.

As a Muslim woman, a mother, a community organizer, and an educator, it was an honor to be united together in a global sisterhood. We had our feet on the ground at this monumental Women's March, that has undoubtedly made history.