There could have been more damage on this journey. Much more!

Sometimes, the car went off the road; the train jumped the tracks, and sometimes I was just out of gas. The bumps, the bruises not only impacted me, but also the many people who shared different parts of the journey. Some stayed and some left. For each of those who shared my journey journey, some of the bumps and bruises healed and some have left scars of various depths. Perhaps this is true for everyone's life, but for most of the time, I really could not focus past myself.

Looking back, I don't think it could have been any different, and after a deep breath and a big sigh, I can admit that it was just perfect the way it was.

A few years ago, when I first started speaking about my experience I was asked to talk about my journey from the perspective of integrating my mind, body and spirit for a group of graduate counseling students.

I started to think about all the different issues that were the constant chatter inside of me and which dimension of my spirit, my mind and my body was the source. It looked like this... 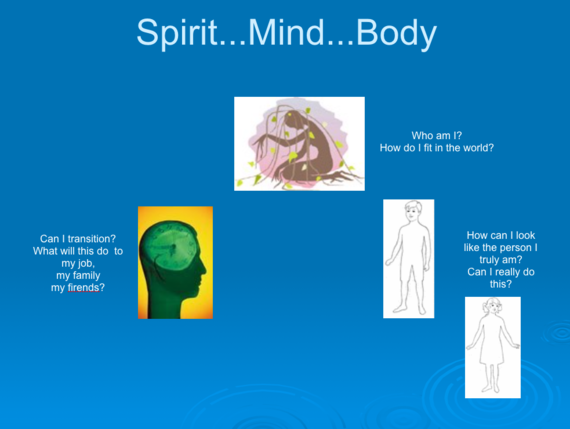 As long as I can remember, my spirit was never at rest. Before I went to kindergarten I had no sense that boys and girls were separated. I was just a child, and even now cannot remember a real sense of my gender identity. But once school started, and the boys and girls were often separated, especially when they went to play, something did not feel right. It was a feeling and I was confused, even way back then, without having a clue what this was all about. Over time, there was chatter in my head, a very low level, perhaps just a whisper, that was questioning: Who am I? Where do I fit?

Then I learned how to play with the other boys -- and even then, it was not an easy journey. The battle between my gender identity and my sexual orientation was a spiritual dilemma for so much of my life. My spirit felt that it was at war with my body and there was never a solution that seemed possible. At least it felt that way for so long.

My body lied to me all my life. Way back in 1960 at my Bar Mitzvah, part of me was looking forward to getting my first electric razor to remove those wispy hairs that were showing that "today, I am a man," was battling with the spirit inside of me that was yelling how wrong this all was, as I still heard those whispers. But mixed in, I could also hear some crying. But I was getting tough -- perhaps even a bully of sorts -- and knew I had to let the boy become the man and be strong in order to survive. I knew it was the only option.

My mind knew there was only one way. I got married, became a father, raised the kids, provided as well and as best I could while keeping the voices and the chatter in the background as suppressed as I could. When I was alone, I could dream and felt obsessed and compelled to let my spirit have some freedom, and found some pieces of women's clothing. Sometimes this was sufficient to put the "fire" out for the moment; sometimes it didn't.

For decade upon decade, my spirit, mind and body were at war with each other. I lived in many worlds -- my career, my family -- all while hiding so much of myself for fear of people learning this about me. I was an actor who wore so many masks to face the world and was probably not the best person I could be to anyone.

I was working hard to be the person I thought they needed me to be. Even when they wanted more than I was giving, I denied it and would fight, reject and project on them that they were wrong. Certainly I was hiding all of this to myself and never had a sense that I might be causing wounds to those I cared about.

I was married for 25 years and raised three children. Even after my divorce, the war between my mind, body and spirit continued for another decade before I could face the problem and find the solution of alignment. My denial had to end, and the possibilities to accept that I was trans, and that I could and would do something to align my body to my spirit, and then was surprised as to how the chatter, the whispers, the crying in the crevices of my mind stopped as all was aligned.

I consider myself blessed to reach this alignment. It would be easy to dwell in regret, but I am pretty sure the alignment of all of me finds no reason to go there.

I am at peace now, and can look back at the journey that got me here and know it was perfect.

I am at peace now and look forward to the next journey.