As this month of June 2016 winds itself down, I find it a bit sad that all the visibility, the happiness, the support, even mixed with this year's tragedy, that occurred during PRIDE month is, at least on the calendar coming to an end.

For me the idea of PRIDE really is something that lasts year round.

It makes no difference to me whether what started out as a celebration of being different; first being LG, then LGB, then LGBT; then LGBTQ; and adding LGBTQIA. Bring on the alphabet I say, as my own sense is that PRIDE is not only about a member of a certain group - although that is in itself important, but the PRIDE to just being you! Being authentic, no matter what that may mean to you, and learning to accept yourself, without having to meet some one else's expectations.

PRIDE has become focused on the nature of one's sexual orientation and gender identity and expression. Through my entire life, while I was hidden, living in fear, shame and confusion on how and where did I fit in, I knew that these my gender identity and sexual orientation were only some of my identities and did not truly represent the entirety of who I am. I had so much trouble understanding why society seemed to teach me that I needed to hide, and that how I knew myself to be was wrong, and bad. Hiding my truth created shame in me, and I would do anything to not let anyone find out my truth.

As you know, for people like me, who hide some aspect of their identity, it usually does not work out well. We lie to ourselves and then share these lies with others. We learn to do this so well, we may not even be aware we are doing it.

We may feel we are incomplete, and never be able to face it, to deal with it, to share it. We may struggle with not having pride in who we really are. 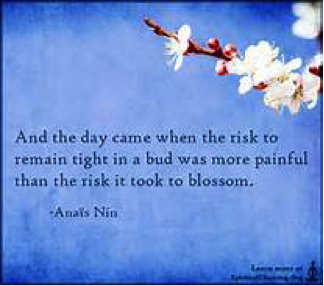 ...there is that point that that we can hide no longer.

Even then, the road is challenging and we need to see and be inspired by those who have travelled similar roads before us.

I know I could not be where I am today without all those who led the way before me. It is easy for me now to get up on a soapbox and announce to anyone who will listen that nothing is impossible. I did not believe this for well over fifty years myself. However, I know that it is like taking a step off of a cliff.

In my book I wrote about it.

I reached the point in my life where taking this leap was no longer a matter of choice. It was necessary. I spent years, no decades, hiding and in denial, not only to myself--but to every- one I ever knew. It was exhausting. It impacted every waking moment of my life. I could never answer the simple question, "Who am I?"

I was ready to take the leap to live authentically.

For me, achieving self-acceptance that I am transsexual and was ready to do something about it, this cliff was quite high; I had no idea where the ground was.

As I leaned over the edge (speaking metaphorically here) the question at hand was whether my life was ending or beginning or was the reality that it was both? I did not feel like a Phoenix, triumphantly rising from the ashes of my previous being. After all, I was not a youngster, and I had lived a lot of life.

I could not turn back. I could no longer stay where I was. I had to leap.

It is now more than five years since I took the leap. I know I have been lucky and had a safe landing. I know not everyone does.

Without PRIDE, and seeing those who have landed and been open and free to be themselves I am not certain that I would have taking my own leap of faith.

No matter what letter or identities you may want to add to the growing acronyms that represent the PRIDE communities, I think that at some point in our lives, we all need to take a leap of faith that it is not just OK to live our authentic life, but that we must. Not only for ourselves, but how can we model and encourage others to take their own leaps without fear of abandonment.

This message is one not just to be celebrated only each June.

Grace Stevens transitioned at the age of 64 and holds a Masters Degree in Counseling Psychology. She is the author of No! Maybe? Yes! Living My Truth, an intimate memoir of her journey to live authentically. Grace is available for speaking with Live Your Truth: Discover Paths to Improved Performance. Grace's new book Musings on Living Authentically will be available soon. Visit her website at: http://www.graceannestevens.com/. Follow Grace on Twitter: www.twitter.com/graceonboard .