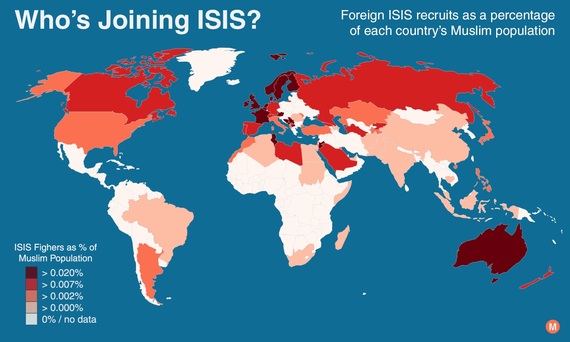 The data for this map comes from a paper published yesterday by the National Bureau of Economic Research: What Explains the Flow of Foreign Fighters to ISIS?

As the map shows, the Muslim populations most likely to join ISIS are not in the Middle East or Africa. Rates of ISIS recruitment are highest in highly developed western countries, the ones with cultures you might least associate with radical Islam. The finding is consistent with several other studies that have found overwhelmingly negative views of ISIS is majority-Muslim countries.

The table below lists countries with the highest and lowest rates of recruitment (excludes countries having 2 or fewer ISIS fighters).

At the top of the list is Finland. Of its Muslim population, which numbers only 42,000, 70 are estimated to have traveled to Syria or Iraq to join as ISIS fighters.

That puts Finland on a par with Pakistan, a majority-Muslim country, Taliban stronghold, and the 7th largest population in the world. Despite having a Muslim population over 4,000 times larger than Finland's, Pakistan is estimated to have an equal number ISIS fighters.

What do ISIS fighters' countries of origin say about their reasons for joining?

By comparing rates of ISIS recruitment with each country's economic, political, and social conditions the paper examines whether any of these factors may explain the phenomenon of foreign ISIS fighters. Here's what they found:

Is there a relationship between a country's economic conditions and its rate of ISIS recruitment? 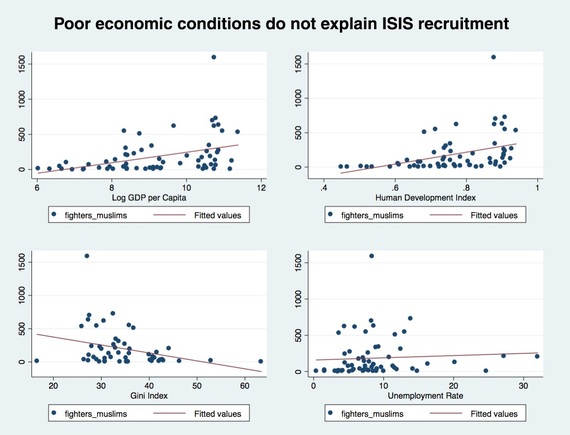 In contrast to what many have theorized, poor economic factors are not the root cause of ISIS recruitment. In fact, the data suggests the opposite is true. Countries with high economic development and low income inequality tend to produce more ISIS fighters.

Is there a relationship between ISIS recruitment and cultural factors? 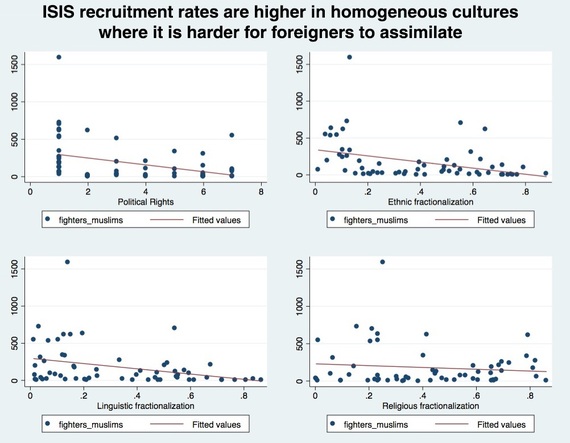 As the paper concludes, ISIS fighters tend to come from countries that are ethnically and linguistically homogeneous, where assimilation is more difficult for immigrants with different cultural backgrounds.

Because the analysis looks only at correlations, it does not determine conclusively whether these cultural factors are causing ISIS recruitment. However, the authors theorize it is cultural isolation that induces some Muslims to become radicalized.

If you'd like to go through the data yourself, here is a spreadsheet with the data for all countries. It includes both "official counts" and "unofficial counts" of ISIS fighters, given in tables 1 and 2 in the paper.

The data for Muslim populations is from 2010 and comes from Pew Research. 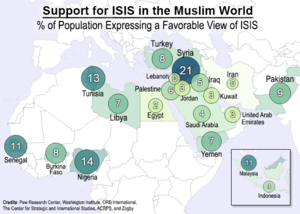