It was the kind of dinner, thirty-plus years later, I still remember. The writer, Susan Edmiston, and her husband, Peter Edmiston, a music business guy, were entertaining about eighteen people in their apartment. Right off the plane from Kansas City, Peter would be arriving with food from Arthur Bryant's famous barbecue place. We were waiting like little birds with our beaks open, getting reports, he's landed, he's on his way, then Peter arrived lugging a considerable amount of food. The barbecue was reheated and we ate and I thought it was outstanding, which I mentioned to Calvin Trillin, one of the guests, who had famously championed Arthur Bryant's. Trillin, never known not to be droll, said-- and take into account the shlepping Edmiston just went through-- "It's good, but you have to actually be there to get the full taste. This is, basically, a take-out order."

Obviously, people who come to New York from other regions of the country that featured specific barbecue styles are going to bring their preferences with them, but native New Yorkers are also becoming foodies on barbecue. My own credentials are extremely dubious, growing up as I did in the Bronx of the 1940s and 1950s where the closest we came to barbecue were the dry, overcooked spareribs from the Oh, Joy Chinese Restaurant. But you know how it goes, you eventually get older, you own a grill, you make spareribs, you think you know something about it. So I think I know something about it. It may not be your something. There's so much good barbecue in New York, but I offer a few thoughts. 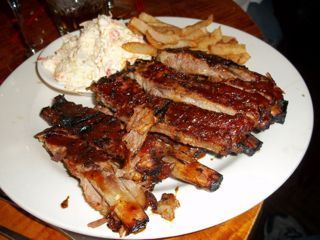 For this discussion, let's just stick to basic pork spareribs, and if you know what I'm about to say, apologies, someone else might not know. Baby back ribs are not from baby pigs or piglets, they are taken from the top of the hog's rib cage and are smaller in size with less fat, and therefore, some say, less fun to eat than spare ribs which are taken from the belly side. You see various places around the city featuring "St. Louis-style ribs." But St. Louis is not known for ribs. "St. Louis-style ribs" merely refers to the way the ribs are trimmed before cooking. If you type "trimming St. Louis style ribs" in the YouTube search box, you'll find a video of a guy doing the trimming. Trimming, that's it, that's the whole deal about St. Louis ribs. I did get to St. Louis some years ago before I knew this, asked my host to take me to the best ribs place in town, and the ribs were mediocre, the kind of ribs you might get if they were the nightly special at a diner off the Long Island Expressway.

So where to go for ribs in New York? I'm almost tempted to say anywhere. Right now we've got a better level of ribs going than we do, say, pastrami. And people can get overly fussy about where they eat their ribs and why-- wet or dry rubs, how smoky they like them. I say, just go. Have fun.

I am going to pick one favorite place uptown and one favorite place downtown and you can work your way through the city to your own favorites. What follows is like saying, "If you want to go to a baseball game, go to Yankee Stadium," but I really like Dinosaur Bar-B-Que. It's working too hard with its faux roadhouse decor, but it's reached the point where it has become genuine faux. The ribs are great, smoky, juicy, and at really fair prices. You can get at least three ribs and a couple of sides for $9.95 If you want to eat that light. A more conventional serving is $15.95.

Downtown, and this is surprising, for ribs I would go to the Knickerbocker Bar & Grill. It's a very attractive old-fashioned New York saloon, and classy, Hirschfeld theater prints on the walls, small combo jazz on weekend nights. It's a place you could go if not everybody in your party wants to eat ribs, and so it occupies a category all to itself, the best restaurant in the city that serves great ribs but isn't a barbecue place. It's also known among steak-eaters for its T-bone, but you might expect that from a serious neighborhood restaurant. Why such outstanding ribs? An interesting provenance. New York foodies know about the very highly rated restaurant, The Grocery in Brooklyn, created by Charles Kiely and Sharon Pachter. Some years ago, Kiely was the chef at the Knickerbocker, the ribs are his recipe, his legacy. Marinated for a couple of days with the rub he devised, cooked on the same grill as those excellent steaks, they're fall-off-the bone delicious. $21.50, enough for two to share.

Incidentally, I once made it to Arthur Bryant's in Kansas City. The place was packed before a Royals game, you lined up to get to the counter, the food was being whirled about confusingly, the line hustled along by the countermen, step up, step up, keep moving, what do you want, and I from New York was the rube, and intimidated. I ordered my ribs and ate them quickly by myself. Truth be told, I enjoyed it more as take-out at the Edmistons.

Author of "My Old Neighborhood Remembered. A Memoir."