New York was the Big Orange before it was the "Big Apple."

Most New Yorkers know their city used to be called New Amsterdam and was once super seedy and brothel-filled, but did you know that once upon a time, hammy beasts roamed the city's streets, stoners had their own grassy jungles and dead bodies were frolicked upon by New Yorkers every day? Actually, that last one still happens... and you've probably done it yourself.

True blue and pinstriped New Yorkers may pride themselves on being hip and in the know, but a lot of them still probably don't know the things below. 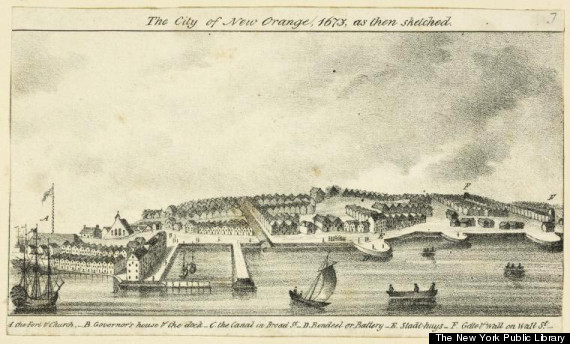 As the story goes, on Aug. 24, 1673, Dutch captain Anthonio Colve took over the colony of New York from England and renamed it New Orange to honor the Prince of Orange, King William III. (The island had actually been Dutch in the first place, when it was called New Amsterdam. England captured it and named it New York in 1665.) The new Dutch of New Orange rule did not last for long, however, because the English and French were teaming up to destroy Dutch trading routes. Facing defeat by the combined forces of these two formidable empires, the Dutch returned the island to England in 1674. 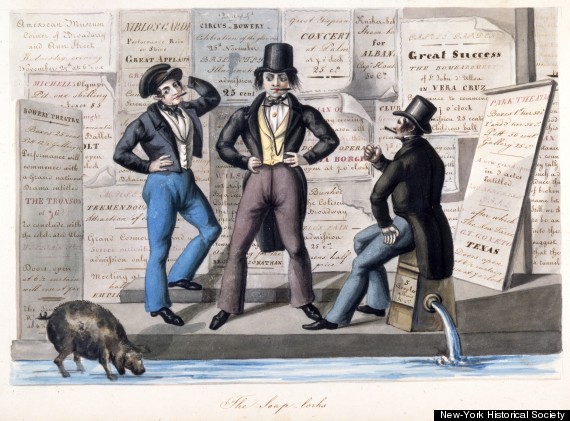 From its early days as New Amsterdam until the 19th century, pigs roamed New York City streets much like the rats and pigeons of today. As Charles Dickens observed, "Two portly sows are trotting up behind this carriage, and a select party of half a dozen gentlemen hogs have just now turned the corner." Why all the swine? They served as valuable street cleaners, and for some, they became a symbol of class equality between the city's rich and poor.

But in 1818, the city's mayor lamented, "Our wives and daughters cannot walk abroad through the streets of the city without encountering the most disgusting spectacles of these animals indulging the propensities of nature." Removal efforts happened here and there, but it wasn't until the late 1850s that the police began seriously rounding up the pigs en masse, eventually eradicating them from the city streets.

In January 1861, New York City Mayor Fernando Wood asked the city's governing body to secede from the Union and become an independent city-state named "Free City of Tri-Insula." Wood's reasoning: New York City's economy was deeply tied to the southern states (and its slave labor), and also quite wealthy. Seceding would preserve New York's southern economic ties and perhaps even free its rich citizens from the burden of federal taxes.

However, Wood received backlash from both the city's political and business sectors, especially as patriotic support for the Union rose following the South's attack on Fort Sumter in April 1861. 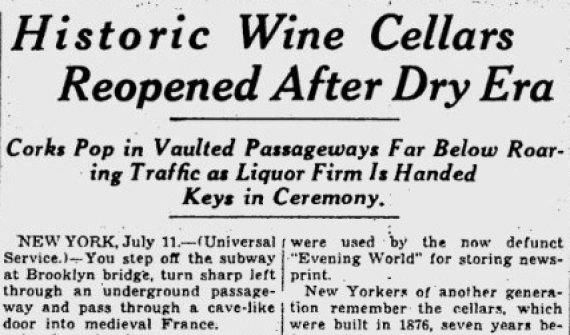 As a way to offset the enormous cost of construction of the Brooklyn Bridge, the city of New York rented huge underground vaults located in the anchorages of the Manhattan end of the bridge to various wine sellers. These areas, which opened in 1876, apparently maintain a consistent temperature of around 60 degrees, regardless of the weather, making them ideal spaces for wine storage.

This area under Manhattan was nicknamed the "Blue Grotto," as a niche near the entrance featured a shrine to the Virgin Mary. New York Magazine visited one of the now-closed cellars (beneath William St. and Park Row) in 1978 and found a fading inscription on the wall that read, "Who loveth not wine, women and song, he remaineth a fool his whole life long." 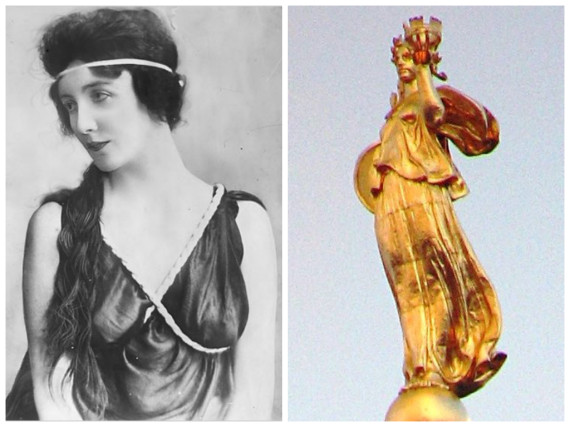 Audrey Marie Munson, the "American Venus," may have possessed the most famous face you'd never actually recognize. Born in 1891 and popular throughout her teens and early twenties, her likeness became widely known as the model for U.S. currency and dozens of major artworks, including over 15 sculptures in New York City alone. An iconic "Gibson Girl", Muson presides over New York's Municipal Building in shining gold and is also rumored to be our nation's "Lady Liberty" featured on the half dollar. (She was also the first actress ever to be filmed fully nude in a movie.) Due to her ubiquitous likeness, she is considered by some to be the first "super model."

But Munson was quickly forgotten and later attempted suicide by mercury poisoning at the age of 28. She spent most of her life locked away in a mental institution after being dubiously deemed "Crazy Audrey." Munson lived until 1996, when she was 105, and now rests in an unmarked grave in New Haven, N.Y. When still hustling for work in her teens, Munson supposedly remarked, "In my line, you've got to make the most of what you've got while you've got it." America put Munson on a pedestal, then destroyed her by forgetting. If you'd rather not forget, here's a list of the more notable places you can find her likeness in statue form. 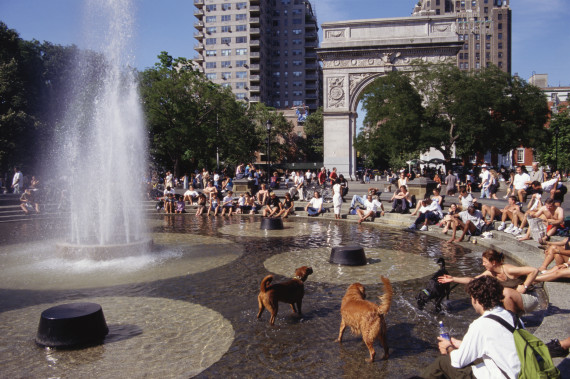 As the population of Manhattan boomed in the 18th century, the city government began to run out of zones for public parks. So the city decided to place new parks on top of graveyards they already owned. Washington Square is the most famous graveyard to get this conversion, and there may still be thousands of bodies below the park. In fact, Dr. Joan H. Geismar, an archaeological consultant for the NYC Parks Department, confirmed to The Huffington Post that much of New York University is atop the former graveyard. It was used as a burial place for unmarked bodies of those who couldn't afford a formal funeral, particularly those who died in a yellow fever outbreak that plagued the city at the start of the 19th century.

Many other parks were once burial grounds as well, most notably Madison Square, Bryant Park, City Hall Park, the Waldorf Astoria and potentially even Union Square, Geismar told The Huffington Post. There's truly no escaping New York's past. 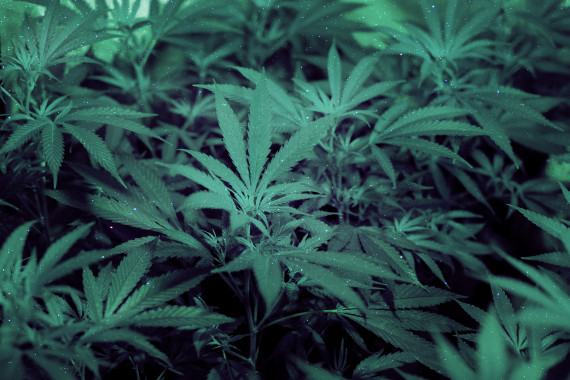 New York, I love you but you're bringing me down. In the summer of 1951, 41,000 pounds of marijuana were uprooted from New York City and incinerated. Up until this point, weed was growing all over the city.

The "White Wing Squad," led by the Sanitation Department General Inspector John E. Gleason, was in charge of destroying the many pot farms that had sprouted up across New York. According to the Brooklyn Public Library, this group was held to a high moral standard and kept them from "entering saloons, using foul language, and neglecting horses." The Squad ended up finding the most weed in Queens, but even in Brooklyn they dug up "millions of dollars" worth of the plant with many being as "tall as Christmas trees." Williamsburg were apparently especially green.

In the end, the plants were incinerated in Woodside, Queens, where Gleason, the uptight squad boss, personally oversaw the burning. It's unclear how high he got. 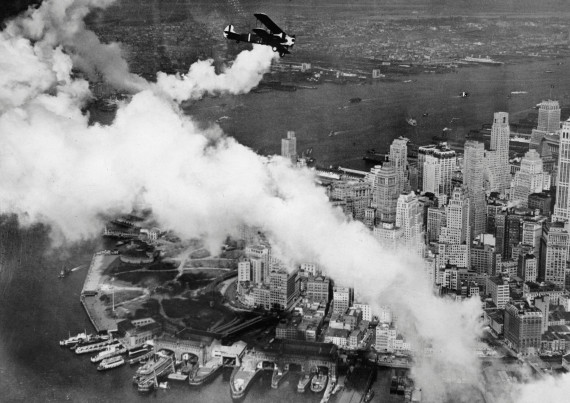 After a night at the Washington Heights taverns in 1956, Thomas Fitzpatrick bet a fellow patron that after he got home to New Jersey, he could return to the bars in under 15 minutes. To fulfill the bet, the then-26-year-old stole a single-engine plane from the Teterboro School of Aeronautics and eventually landed it on St. Nicholas Ave. around 191st St. Apparently, he meant to land on the field of a nearby school, but because their lights were off, the allegedly drunk pilot decided the lamplit street would be his best chance at winning the bet.

A sergeant of the Police Aviation Bureau described Fitzpatrick's chances of success as "100,000-to-1." Although he initially received a $5,000 bail for the stunt, Fitzpatrick ended up only paying a $100 fine, partly because the owner of the stolen plane refused to file a complaint. That said, his pilot's license was revoked, which didn't keep him from completing a similar landing a couple years later on Amsterdam Ave. and 187th St., after a bar patron refused to believe he'd pulled off the first flight. That time around, he had to serve six months in jail.