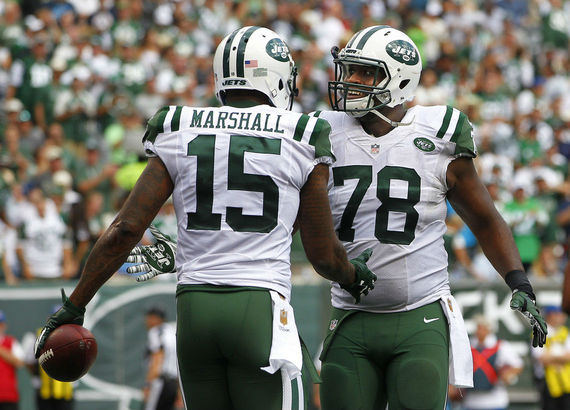 The New York Jets return home on Sunday, flying high off of their 20-7 victory of the Indianapolis Colts. The Jets are feeling good with their season starting off at 2-0, and they play host to a reeling Philadelphia Eagles team that has begun the year at 0-2. The Eagles have not looked good, making fans and experts begin to question the multiple moves that Chip Kelly made during the off-season.

The wins have come with some consequences. Eric Decker, Chris Ivory, and Darrelle Revis all enter this weekend as questionable with injuries. All three are game time decisions, per head coach Todd Bowles.

Here are some keys to victory for the Jets on Sunday:

Brandon Marshall will be counted on for a huge game. He has been huge for the Jets so far, with 13 receptions for 163 yards and two touchdowns. He literally carried the team to the game-clinching touchdown last week. He will see a lot of Byron Maxwell on Sunday. With Eric Decker banged up, Marshall winning the matchup against Maxwell is going to make a huge difference.

The Jets are going to have to use the short passing game to open up the run. Chris Ivory is banged up with a hamstring and quad injury. So far, the Eagles have only allowed 3.1 yards per carry on the ground, and no rushing touchdowns so far. Conversely, teams are completing 70% of their passes against the Eagles, averaged 270 yards passing per game, and posted a 98.0 passer rating. Clearly, they are vulnerable.

Ryan Fitzpatrick is completing almost 64% of his passes so far for the Jets. All Jets fans will agree, this is efficiency the team hasn't seen in quite some time. Use the pass to set up the run. The Jets have the ability to do it, finally.

On defense, make Sam Bradford beat you. Yes, the Eagles have a lot of weapons, and move at a frenetic speed. The Eagles, however, also has not been able to run the football, averaging a mere 1.9 yards per carry, and that is with the defending NFL rushing champion DeMarco Murray in the fold.

The Jets can pressure this offense, having forced ten turnovers so far in 2015. Sam Bradford has already thrown four interceptions. The Jets' front seven can stop this running game, and can force it to the pass. Bradford does not take care of the football, and he can be turned over. Stop the run, and force Sam Bradford to get it done, and the Jets have a good shot at heading to a 3-0 start.