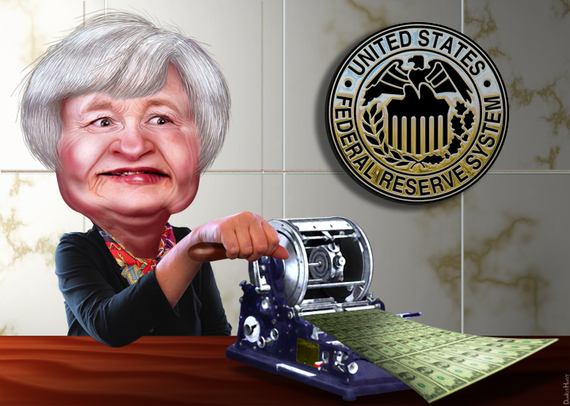 There it is again: the Fed rate hike talk we've missed so much since last December. Fed Chairwoman Janet Yellen said on Wednesday that risks for the U.S. economy are rising and indicated that the central bank may delay its next interest rate hike in March. However, as always, nothing is granted in this world.

According to a Bloomberg analysis, nearly 68 percent of economists say that the Fed will hike rates in June, but not in March. Previously, the central bank had planned to increase interest rates in March, but due to trouble overseas and uncertain economic conditions, that seems to be unlikely.

Yellen is concerned about global meltdown in stock prices, but she is optimistic about stronger U.S. labor market

The global meltdown in stock prices has caused worries that the global economy will slide into recession in 2016. That combined with investors fleeing into safer assets is tightening financial conditions faster than the Fed expected. "Foreign economic developments, in particular, pose risks to U.S. economic growth," said Yellen on Wednesday, singling out the economic turmoil in China.

On the other hand, Yellen points to a strong U.S. labor market and steady economic growth. When she was grilled by U.S. lawmakers on Wednesday in Congress, she said that she still expects rate hikes this year. "We are watching developments very carefully. I would say there is always some chance of a recession in any year. But the evidence suggests that expansions don't die of old age," Yellen said.

Although she is optimistic regarding a rate hike this year, she didn't indicate whether or not that may happen in March or later this year. When she was asked if her view on the U.S. economy has changed since the beginning of the year she said: "The answer is maybe, but the jury is out." -- not a very concrete statement, did anybody expect anything else?

Inflation should be the Fed's major consideration; Trade 24 expects oil price slump to continue, which could increase deflationary pressure

While it's true that the labor market is developing well and growth has been steady, that shouldn't be the Fed's major consideration. The primary task of the central bank is to manage inflation, which currently remains below the 2.0 percent target. Considering the low price of oil, it's unlikely that inflation will pick up significantly anytime soon. Furthermore, forex trading experts like Trade 24 expect oil prices to drop further, moving toward 26 pivot points.

Yellen acknowledged that falling energy prices create deflationary pressure, "but at this point it's premature to make a judgment on that," she said.

However, it seems as if the markets don't share her point of view. Fed fund futures contracts indicate that traders are not expecting any rate hikes until 2018. In fact, they are even pricing in a small likelihood of a rate cut.

Stephen Massocca from Wedbush Equity Management says, "People have figured out she (Yellen) is trapped. I don't think they will raise rates at all this year -- it's "one and done." -- As in 2015, the markets don't believe the Fed's wishy-washy.

Another major concern for the Fed should be the recent tightening of credit for U.S. businesses. Lending standards have become tougher and corporate credit spreads have been rising. "Financial conditions are tightening the Fed's belt," says Deutsche Bank, doubting the Fed's ability to rise rates before December.

Additionally, U.S. businesses have to pay higher interest rates on bonds, relative to U.S. government debt. "A plausible downside risk to the economy is that tougher financial conditions cause firms to slow capital spending and hiring. The corporate sector looks comparatively more vulnerable," that's according to Goldman Sachs.

Hence, Yellen's pointing at the labor market and steady economic growth is not a very compelling argument in favor of a rate hike. Although these factors are certainly part of the consideration, the real issues for the central bank are low inflation and tighter liquidity. Therefore, it doesn't seem very likely that the Fed will increase interest rates in March.