Lots of people either love God, or at least have a sense that there's something bigger than us in the universe. Like me, they long for a more just world in which the poor are empowered, the planet is cared for, and where LOVE is the most important thing. Period. They might even see an inspiring example of that in Jesus.

And yet, they reject the label "Christian," or they hesitate to call themselves Christian.

Usually it's because they've been hurt, judged or pushed to the margins by others Christians, or they just perceive the whole Christian culture to be exclusive, narrow, weird, or even irrelevant.

I think Jesus would agree with them more often than not.

I've been thrown out of church. I had a Bible thrown at me by a youth minister.

I've also helped start a community for people who were hurt by church, just like I was.

I've been called a heretic, an apostate and anything but a Christian.

Fine. Call me what you want. But you don't get to define who I am and who I'm not. That's between God and me.

That's why I'm writing my new book, Not THAT Kind of Christian," which is for what I call the "Nones, Dones and Prodigal Sons" who don't feel like they fit in church culture -- or maybe can't even claim the name "Christian" for some of the reasons I walked away for a decade, among others. Here's what I mean:

NONES the fastest growing spiritual demographic in the United States. These are so-called "Religiously unaffiliated." A lot of them have never been connected to organized religion at all. And they're not really inclined to because the whole thing seems foreign and unnecessary.

DONES walked away after having some connection to religion. Some just drifted away over time, and others -- way too many others -- turned away and said "good riddance." This is usually because of witnessing hypocrisy, political infighting, turf battles or an obsessive fixation on money, survival and getting more people through the door to "save their church."

Prodigal Sons walked out too, or were pushed out, often because of questions they asked, Something they said, didn't say, or even because of who they were. Like the story of the Prodigal Son in the Bible, they often feel unworthy, judged, less than. They've experience spiritual and/or emotional injury. Perhaps they were judged or condemned because of how they vote, how they live or even who God made them to be. They ended up feeling unworthy of love and inclusion, so rather than fighting the system, they left. Probably for good. 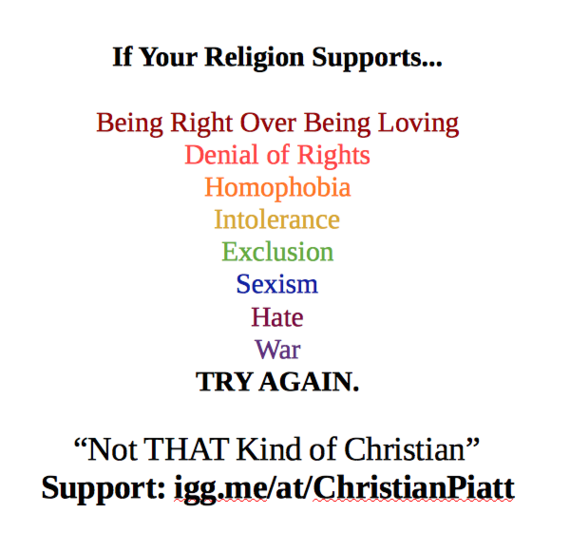 There are lots of perceptions about who Christians are,and most of them aren't Good. In a survey I conducted some years back for a book, the words most often associated with Christians were "narrow-minded," "judgmental" and "hypocritical." We've earned a lot of this, though some also has come from the tendency of media to jump on stories of scandal and corruption that hardly are the status quo. But often times, Christians get defensive and react to these perceptions rather than trying to understand, listening and even apologizing in those legitimate cases where Christianity has done someone wrong.

Then there are others who don't feel they're like that kind of Christian, so they define themselves as such. But not many people are interested in knowing what you're not. I mean, I'm not an elephant, but that tells you nothing about who I am.

Maybe we believe in God. Maybe we're not sure. Maybe we believe Jesus was human and divine. Maybe we have no idea what to think about that. Maybe we think that salvation is personal and necessary to enter God's grace. Maybe we feel like grace wouldn't be grace if it wasn't free, without any condition. Maybe we imagine God's Kingdom as something we experience after we die. Maybe we think it's a real-life healing of the world's brokenness that we're supposed to help realize, here and now, among us.

In the end, what you believe isn't as important to be as your humanity, your dignity as a fellow citizen of the planet. In the end, what's more important to me is that we put love into motion, make it a verb that informs every decision in our lives. In the end, you can be a Christian or not, go to church or not, as long as we can agree on on this:

You are beautiful beyond belief.

Your humanity is more important than my ideology.

LOVE is the Way, the Truth and the Life.

JOIN THE "NOT THAT KIND OF CHRISTIAN" MOVEMENT HERE

Author of "Leaving A-Holiness Behind," Host of Homebrewed CultureCast Podcast