Buried deep in the report on NSA spying by President Obama's advisory board is a paragraph that implicitly rebukes some of the unprecedented interventions by the White House into journalism this year.

Media reform advocate Josh Stearns found this nugget on page 127 of the report: 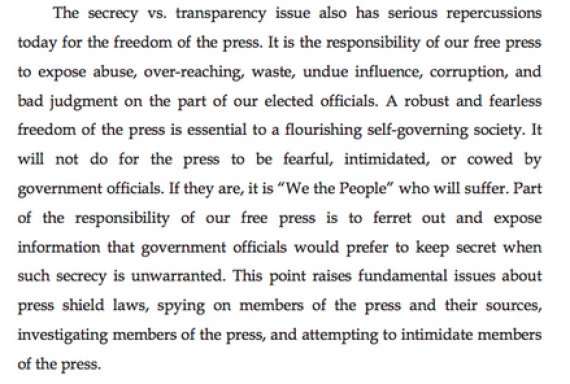 It's easy to imagine who the panel is referring to. The Justice Department has admitted to spying on members of the press and their sources, and the White House's tactics and attitude towards the press have led to what many say is a major chilling effect.

Elsewhere, the group also stressed that it saw the preservation of the "rights and the security" of journalists as a "particular concern."

However, the panel had this to add:

The nod to press freedom in the NSA report is then followed by "At the same time, the potential danger of leaks is more serious than ever…"