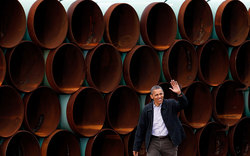 The Keystone XL Pipeline is the 1,664 mile project that has become the political football of the 114th Congress. What most folks don't know about this football is that it is already operating from Steele City, Nebraska to Port Arthur, Texas. President Obama is in an interesting position because the already completed Northern leg extension (which would transport oil between Hardisty, Alberta to Steele City) has been awaiting a Presidential permit for a little over three years now.

President Obama has stalemated on this issue. We can all agree that it is difficult to decipher fact, fiction, and feeling in this matter, but now is the time to make a move. The amount of crude oil being shipped and sold by the barrel has skyrocketed since the XL Pipeline project began in June of 2010 - TransCanada is making their profit, you can believe that. They have the ability to run out the clock on Obama's last term, and the President is just sitting in the Red zone, chips stacked, ball in his court with the ability to clinch a major win for the American people.

According to the State department, Keystone XL would create 1,950 jobs over a two-year period after which 50 permanent jobs would remain. The State Department also estimates that the Keystone would contribute $3.4 billion to the U.S. economy (.02 percent of GDP). Though this is a positive, if all we wanted from Obama was to blindly boost the economy, legalizing marijuana could have gotten that job done years ago.

These facts have been known for quite some time and the people have spoken. Whether it is because they think it will create jobs, boost the economy, prevent a price spike at the pump, or just flat out don't believe the environmental hype - roughly 65-70 percent of Americans support the approval of the pipeline extension. Coincidentally, about 71% would support a raise in the federal minimum wage to $12.50 or above. The President is in a major position of leverage. I say, President Obama: double your pleasure, double your fun -- propose a bill to Congress raising the minimum wage with a promise that you will approve the Keystone XL Pipeline.

America! The battle on the Keystone is over and both sides have lost! Environmentalists have convinced Americans that building the Keystone is a bad thing and with the freefalling price of crude oil, potential Keystone XL oil profiteers are on target to lose their profit margins. If the President is willing to play a quick game of "lets make a deal," working families can be the real winners. Why not trade in the Keystone to benefit those Americans currently making minimum wage or about the cost of a 2015 Kia Rio per year ($17,160 based on 8 hours/day, 260-day work year here in the District). The current minimum wage has too many Americans families living in poverty. If the inevitable approval of the Keystone XL Pipeline is the cost, it is a small price to pay - baggage and all.