NAIROBI -- Inscribed in our national coat of arms and underpinning Kenya's rich tapestry of culture and history is the spirit of Harambee (Let Us Pull Together). Harambee, or to give it its modern interpretation, interdependence, is central to our belief that only by pulling together can we and will we solve our problems and advance our communities. Harambee nurtures every Kenyan from birth, through school and into the fabric of everyday life. It encapsulates our ability to pull together, to cope with unexpected crises and, most especially, to meet the challenges of our modern world. The premise of harambee and interdependence is at the heart of our constitution. It is the promise we have made one another. It is also the key to our relations with our neighbors in the East African region, throughout Africa and our allies and trading partners worldwide. Our national well-being and the heritage we wish to leave our children depend on our working together to ensure that we harmonize sustainable development with our exceptional environmental partners. Our prosperity depends on our ability to trade goods and skills with others. Our lasting security depends on our ability to work with other nations to ensure that peace reigns inside and outside our borders. Kenya and the world have never needed the spirit of harambee more than they do today as we face generation-defining challenges blind to national borders. We share the spirit of harambee with many nations and cultures. But one relationship in particular -- today and throughout the half century since our independence -- has been of critical importance, and that is our friendship with the government and people of the United States of America. Our path to independence was in no small part inspired by the valor and urgency of the Civil Rights Movement. The most concrete expression of this was the role of Thurgood Marshall, a civil rights hero who, before he became a justice of the U.S. Supreme Court, played an important part in the drafting of our first constitution as an independent nation.

America's vision and generosity for a distant country struggling for independence laid the foundation for a future President Barack Obama and everything that means to the progression of African American unity.

The governance of our young nation was strengthened immeasurably by the generous and visionary intervention of America in the education of young Kenyans. Prompted by our son Tom Mboya, Sen. John F. Kennedy labored mightily alongside activists such as Sidney Poitier and Harry Belafonte to airlift hundreds of Kenyans to colleges in the U.S.. Among them were Barack Obama, Sr. and Wangari Maathai. There can be no better illustration of the sweet fruits of "pulling together" than the world these two left behind. America's vision and generosity for a distant country struggling for independence laid the foundation for a future President Barack Obama and everything that means to the progression of African American unity. Professor Wangari Maathai used her six years of learning in America to observe the non-violent activism of the Civil Rights Movement and ultimately change Kenya and the world's environmental consciousness. So enormous was her contribution that she became the first African woman to win the Nobel Peace Prize. Kenya and the United States are forged from a deep and relentless quest for democracy, equality of opportunity, the freedom of association and an openness to the world. Our record after 50 years of independence is a fine one, but we have learnt from our friend the United States and its 239 years of independence that it takes a long time to attain the fullness of a nation's promise to itself and all its citizens. Today, Kenya stands on the cusp of great prosperity. We are a deepening democracy that embraces pluralism at a time when the world faces the grave challenge of tyranny and terror. Following many years of neglect towards one another and the conflict of 2007/8, we have shown ourselves, and the world, that we can positively transform ourselves constitutionally, socially and politically. Kenya is traveling along an arc of justice, pulled forward by the immense promise of equality, freedom and prosperity that our people have so desired. Much remains to be done to secure the world from poverty, terrorism and fanaticism and environmental degradation. The United States is an important global actor in seeking, resourcing and implementing the solutions, and Kenya recognizes its role and responsibilities. Harambee will lead us to "pull together" with the unique willingness and generosity of our friend, and many other partners, to confront these challenges. In the world of technological innovation and entrepreneurship, harambee will play its part also. America's technological accomplishments are unparalleled and provide immense inspiration to young entrepreneurs throughout the African continent; and Kenya's leading role in mobile money transfer and M-Pesa provides similar inspiration in return. Kenya warmly welcomes President Obama on this historic visit and for the sixth Global Entrepreneurship Summit. I look forward to engaging him on all these matters and to raising the friendship between our nations to new levels of cooperation and goodwill. Harambee.

As Obama Visits His Father's Home, Kenya and the U.S. Must Look to the Future
Garissa University Attack 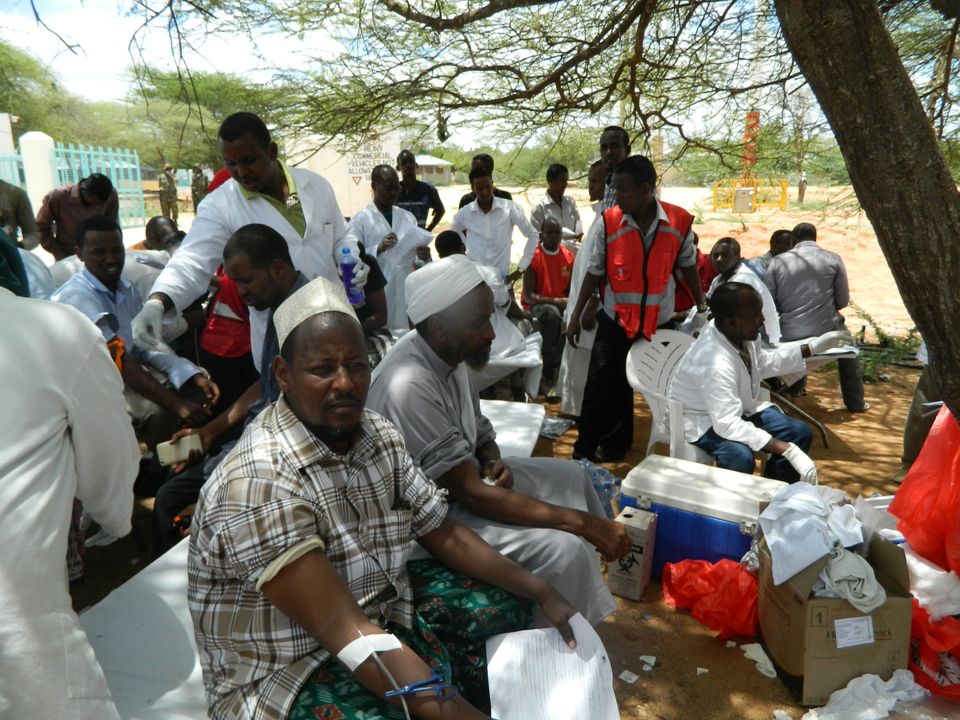