Occupy Chicago forces followed the lead of the Occupy Wall Street Protesters who have successfully entrenched themselves in Zuccotti Park. Seeking a more permanent site for their occupation, Chicago demonstrators erected a tent city in Congress Plaza after an earlier march and rally at 7pm on Saturday, October 15th. 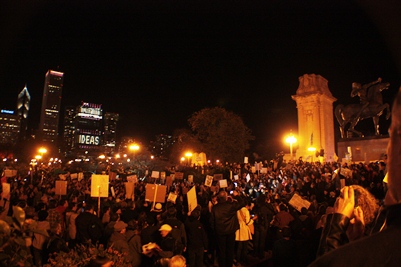 The earlier rally began at the intersection of Jackson and LaSalle near the Federal Reserve Bank of Chicago and the Chicago Board of Trade, the site of the group's 23 day occupation. In solidarity with the "Global Day of Action," over 2000 people gathered at the peaceful but noisy rally. Iraq Veterans Against the Afghanistan War held a banner along Jackson Boulevard while across the street others toted cardboard signs that exclaimed, "Wake Up!" and "I'm a human being. My life has value!" A pickup truck spray painted with the movement's Twitter hashtag, "#occupychi," circled the block pausing briefly to receive cheers from the crowd.

Following the rally, protesters took to the street. They filled Jackson Boulevard chanting, "The people united will never be defeated," and in Spanish, "El pueblo unido jamás será vencido" along with other calls familiar to the Occupy Movement. Flooding southbound Michigan Avenue, the protesters brought traffic to a halt as they flowed into Congress Plaza.

Two days earlier, at the Thursday, October 13th General Assembly, Occupy Chicago participants voted to relocate from their stronghold at Jackson and LaSalle to an undisclosed location. After Saturday's rally, participants then began erecting an encampment in Congress Plaza, the site of the group's daily meeting. Participants were aware that their actions would draw the ire of city officials and the Chicago Police Department (CPD), but unanimously, the group decided to establish a more permanent location.

For 22 days, Occupy Chicago has had zero arrests. They have complied with local ordinances and worked closely with the CPD to coordinate the logistics for demonstrations. However, tonight's attempt to occupy a new public space brought Occupy Chicago into direct confrontation with the Chicago police. 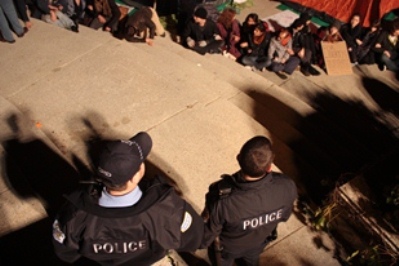 By 10:30pm, approximately 50 police cruisers and police SUVs lined the roadways surrounding Congress Plaza. Dressed mostly in black except for their protruding blue collars, officers on foot crept up slowly until they had created a perimeter encompassing the four sides of the park. Eight other officers on horseback moved into position along Michigan Avenue. Members of the CPD were professional, courteous, and unresponsive as the protesters bellowed passionately, "The CPD is the 99 percent" and "1. We are the people. 2. We are united. 3. This occupation is not leaving."

After 11:00pm, a Chicago Police Captain informed the occupants of the plaza that they were in violation of a specific municipal ordinance, and that they needed to vacate or faced being arrested. Heedless of these warnings, demonstrators instead locked arms to form a barrier around the encampment.

Across Michigan Avenue, a crowd of nearly 1000 supporters gathered in solidarity outside Roosevelt University. Buoyed by Occupy Chicago's ubiquitous drumming squad and a Sousaphone, the indefatigable crowd clapped, chanted, cheered throughout the ordeal: "The whole world is watching!"

During the next two hours, the police and protesters readied for the impending showdown. Occupy Chicago's social media team streamed live video from the event to over 2000 people. Likewise, participants used a live Twitter feed (#occupychicagoand #occupychi) to deliver updates and photos to their nearly 14,000 followers. Updates were also posted to the group's website (http://www.occupychi.org) and their Facebook page.

As the cries of "We are the 99 percent" echoed from the supporters across Michigan Avenue, the demonstrators in Congress Plaza broke into a number of songs: Woody Guthrie's "This Land is Your Land," Bob Dylan's "The Times They Are a-Changin'," and unexpectedly, Queen's "Bohemian Rhapsody" (impressive in its near entirety). 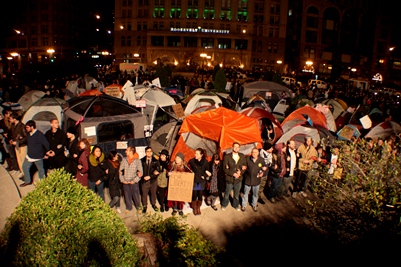 By 1:00 a.m., the police began their arrests. Harsh white light blanketed the demonstrators in an angelic glow, and the black cloaked mass of officers oozed through the plaza like an amoeba, slowly ingesting one protester at a time. Unlike the violent clashes seen in New York and Rome, Chicago police politely asked demonstrators: "Would you like to leave? If not, we will arrest you. Which do you prefer?" Most, if not all of the encamped protestors, chose to be arrested. Officers stood the individuals up, turned them around, and handcuffed them using plastic "zip" security ties. A handful of demonstrators refused to stand and were carried away by the officers.

Demanding their constitutional right to free assembly, the crowd of about 150 non-violent demonstrators waited patiently for the slow moving police procession to reach them. As each individual was taken into custody, another demonstrator would stand behind him or her holding an American flag. A voice from above the plaza cried out, "Tell me what democracy looks like." Those below calmly awaiting arrest called back proudly, "This is what democracy looks like." 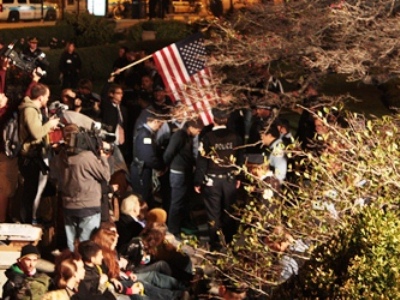 Meanwhile, a handful of officers indiscriminately dismantled and dragged tents across the plaza. Personal belongings were collected by the police and by members of Occupy Chicago. As the tents began to disappear in a flourish, someone yelled, "Get into the tent!" The door unzipped and twenty individuals cloistered themselves in the last remaining tent.

In a matter of minutes, police had reduced the once bustling and vibrant encampment to this single, gray, nylon structure, dubbed the "Liberty Tent." Demonstrators inside ignored repeated police requests to exit the structure. One hundred bystanders watched as the police cut the fabric and exposed those inside. Police forces then hauled the resistant demonstrators to awaiting police trucks, and later, a CTA bus.

By 3:30 a.m. the plaza was largely cleared, and the singing and dancing supporters across the street had migrated to the police station to await the release of their fellow Occupy Chicago members. Those arrested received a court date and a $150 citation, and many vowed to return after getting much needed food and rest.