I just knew I could become pregnant by kissing because of a book I stumbled upon in the library in the 8th grade in the early 70s. After the kiss, the author said to take either a cold bath/cold shower or a stork would deliver an already diapered baby to your front door.

Even some of the older women in the neighborhood would scare you by telling you that boys will give you “cooties” and that “fast” or “fresh” girls can become pregnant by kissing. So, who knew kissing was such a big responsibility?

I used to jump-rope to that fun and silly American k-i-s-s-i-n-g rhyme. As a child, I never paid any attention to the meaning behind the words…

(Girl’s name) and (boy’s name) sitting in the tree
K-i-s-s-i-n-g! (spell it out)
First, comes love.
Then comes marriage.
Then comes baby in the baby carriage

I was a small town girl, aged 14, and he was a city boy, aged 16. We met when he was visiting his aunt and we talked a few times at sporting events and over the phone. Frankly, I was over the moon because up until that time, I had never been told I was cute–by a boy. No matter what your friends and family may have told you; as a teenager, it does not count until a boy tells you that you are a cutie patootie!

My father made it very clear that I could not date or have company until I was 18–UGH!  So, I knew I was breaking an  “I Shall Not Kiss” Commandment 4 years early when I heard a familiar voice say…

I said, “Okay, we can kiss just as long as I don’t get pregnant” ― and he gave me the strangest look…  My school let out at 3:00, and I had until 3:15 to walk home in time to answer a ringing phone from my mom.

So, I puckered up respectfully for my first kiss. I closed my eyes and I was waiting for the closed-mouth, pressed-lip, and mutual-button tap-tap kiss. But, I didn’t feel his lips. I opened my eyes. He was laughing, and what this city boy told me next I had never heard before.

He said that I had been watching too much TV.

“That’s not how you kiss in real life.”

Well, I said, I have seen my mom and dad, husband and wife, Lucy McGillicuddy and Ricky Ricardo, and even Hollywood movie stars kiss this way.

With a fake French accent, he said, “It is called the French Kiss.”

I was a naïve impressionable teen. I was smitten. I thought all city boys were a little groovier and hip than the boys in my small town of Havre de Grace.

So, I followed his instructions, ran home, and answered the phone on the third or sixth ring. Then I called my best friend Ingrid to tell her there was a new kiss all the way from France and that I liked it–that I would give her all the details on the way to school the next day.

Well, apparently, she had come across the same book in the library and yelled into the phone, “Don’t forget to take a cold bath!” I told her that I had the water running.

I did something highly suspicious that night that should have raised eyebrows ― I buried myself in homework just in case my parents could tell I had been kissed.

So, for the next few days, I had looked up at the sky so much that I had a crick in my neck from seeing if an oversized bird with a long, long yellow beak was lurking around in my neighborhood to make a baby drop!

Then I knew it was not true after my parents signed the permission slip for the science teacher to show our class the infamous 8th-grade film on the reproductive system (the Birds and the Bees). Most of us giggled and blushed throughout the whole film. I realized then that k-i-s-s-i-n-g was and is quite pleasurable and pregnancy-free.

So, merci beaucoup to France! 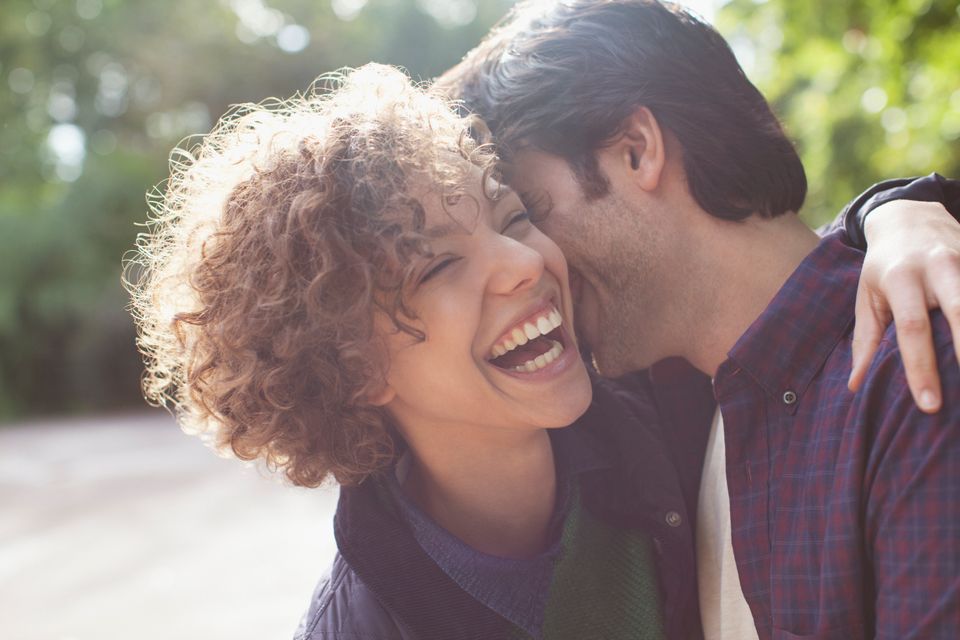 1 / 5
Kissing is good for your teeth.
There's a reason a kiss is called a "wet one" -- smooching stimulates saliva production, which can actually <a href="http://www.webmd.com/sex-relationships/features/kissing-benefits">wash harmful bacteria off the teeth</a>, dentist Mathew Messina told WebMD. It can also&nbsp;<a href="http://www.glamour.com/health-fitness/blogs/vitamin-g/2009/02/kissing-good-or-bad-for-your-h.html">reduce plaque buildup</a>,&nbsp;Glamour reported.
Sam Edwards via Getty Images