Scientists have uncovered what may be the world's oldest murder case. The victim was bashed in the head -- twice -- and then tossed into a pit deep inside a cave system in Spain. And it happened 430,000 years ago, during the Middle Pleistocene era. 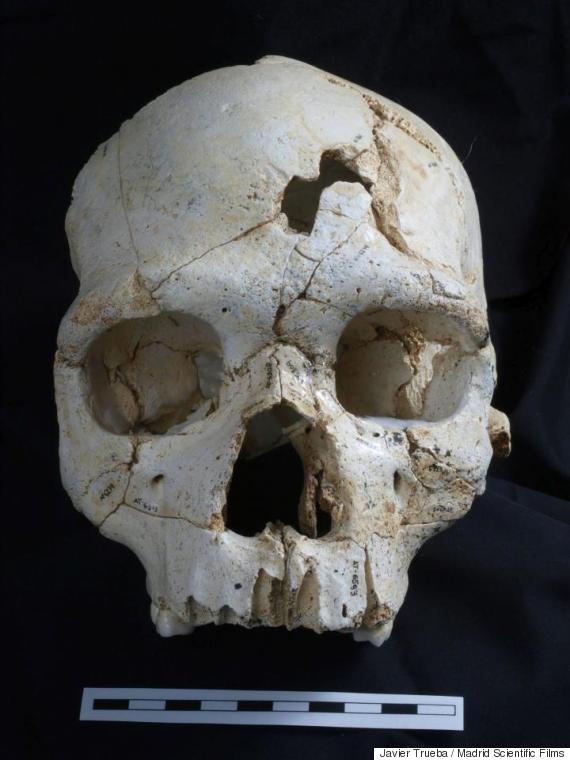 As seen in the image, there are two cracks in the skull above the left eye.

“Either one of them could have been lethal because they would have penetrated the brain,” paleoanthropologist Rolf M. Quam of Binghamton University told The New York Times. “The fact that there were two fractures seems to imply an intention to kill.”

Indeed, the scientific abstract published in PLoS ONE reads more like a coroner's report:

"The type of injuries, their location, the strong similarity of the fractures in shape and size, and the different orientations and implied trajectories of the two fractures suggest they were produced with the same object in face-to-face interpersonal conflict. Given that either of the two traumatic events was likely lethal, the presence of multiple blows implies an intention to kill. This finding shows that the lethal interpersonal violence is an ancient human behavior and has important implications for the accumulation of bodies at the site, supporting an anthropic origin."

In other words, we humans have been killing each other for a very long time.

"This represents the earliest clear case of deliberate, lethal interpersonal aggression in the hominin fossil record," the research team wrote.

The skull of the victim, a young adult of unknown gender, was found in 52 pieces and then put back together by the research team. Using modern forensic techniques, including contour and trajectory analysis, the team determined that the fractures were made by two separate blows from the same object, each with a slightly different trajectory, according to a news release.

Sala told Reuters that the murder weapon was likely a wooden spear, stone spear tip or stone hand axe. The researchers are still missing a motive, but that might be a little tougher to determine.

"Unfortunately, the intentions do not fossilize so it is impossible to interpret the motivation of the killing," Sala told the news agency. "Not even Sherlock Holmes could help us in that."

The skull was among 28 sets of remains discovered in Spain in what's known as Sima de los Huesos or the "Pit of the Bones." The pit lies inside a cave system in the Atapuerca Mountains and at the bottom of a shaft more than 40 feet deep.

Scientists believe the ancient murder victim was dead on arrival as falling accidentally might cause one crack in the skull but not two nearly identical fractures. Since the victim didn't fall, the body must've been dumped there.

"The only possible manner by which a deceased individual could have arrived at the SH site is if its cadaver were dropped down the shaft by other hominins," the researchers wrote.

That would make it the earliest known example of funerary behavior in the human fossil record in addition to being the world's oldest crime scene.

Sala told the Los Angeles Times that the other remains are being examined for potential evidence of ancient crimes.