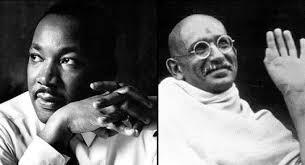 In the excitement surrounding America's nuclear treaty with Iran, though it's certainly a good step forward, my hope is that a broader "teachable moment" will emerge to catalyze a substantive world peace movement and the consignment of these horrific nuclear weapons (which never should've been invented in the first place) to the dustbin of history.

If you think this sounds too "pie in the sky" or utopian, keep in mind that even Ronald Reagan, as conservative and pro-military as he was, after he saw the 1983 film "The Day After"--which depicted the monstrous after effects of a nuclear war on modern day America--underwent such a radical transformation that he thought about getting rid of all nukes. In a 1984 speech Reagan said:

"My dream is to see the day when nuclear weapons will be banished from the face of the Earth."

When it comes to bold visions and big thinking on nuclear disarmament, today's more timid breed of Republicans (and Democrats), beholden as they are to the military-industrial complex that Ike warned us about, are "no Ronald Reagans."

In a talk he gave in New York a few years ago, "Apocalypse Never" author Tad Daley claims that it might be dumb luck as to why humanity has dodged a bullet and avoided nuclear holocaust in the seven decades since the bomb's invention. His book reveals at least a dozen frightening scenarios, in addition to the 1962 Cuban Missile Crisis, when because of a political crisis, human error, or technical failure, the world came frighteningly close to the brink of nuclear armageddon.

Will we be so lucky in the next seventy years? Given the dumbing down trends in society today, as our education system and media grow less concerned about thinking in general--let alone nurturing the moral imagination--and as the bar for presidential timber continues to lower, I have a hard time trusting our current and future leaders with the diabolical power to destroy all life on earth with a push of a button. Do you? Not to mention the possibility of a catastrophic mistake or technological malfunction.

So let's begin a serious movement, immediately if not sooner, to eliminate all nuclear weapons from planet earth; with a strategic political vehicle to make it happen.

This weekend my wife Claudia and I took a mini vacation to visit my parents in Ocean Grove, a beautiful beachfront town on the Jersey Shore. While visiting the town's historic Great Auditorium, I learned that president Taft once gave a speech there suggesting that, in the future, all countries should settle their disputes by negotiation rather than fighting. What a simple, beautiful idea! Taft's quixotic talk is said to have planted the seeds for the League of Nations and, eventually, the UN.

Keep in mind that Taft was president during the first decade of the 20th century, the apex of the first Progressive movement, when such bold and visionary thinking (along with Upton Sinclair's "The Jungle," Teddy Roosevelt's trust busting, the Woman's Suffrage movement, and a strong socialist party) were de rigueur.

Though America's next upsurge of political radicalism, in the 1930s, had to do mostly with economic issues, the 1960s liberation movements--led by John and Yoko and the whole "make love not war" crowd--made a serious effort to "imagine" (in the words of Lennon's famous song) "living life in peace." We need to get back to this utopian spirit of possibility.

Did you know that one of the world's greatest writers, Leo Tolstoy, was also a pacifist? Although this irked the war-like Russian Tsars, they left Tolstoy alone only because he was so popular and beloved as a novelist. In fact, it was Tolstoy who inspired Gandhi to embark on his own pacifist adventures (the two kept up a correspondence); while Gandhi, in turn, went on to inspire Martin Luther King's philosophical turn toward non-violence. Pretty amazing stuff when you think about it.

Imagine how humanity would rejoice in a truly Post War world as massive amounts of money, now spent on killing people, are diverted into curing diseases, free education and health care, food to end starvation, radical infrastructure improvements (high speed trains from New York to Beijing, yeah!) and a Green New Deal to eliminate all reliance on fossil fuels and nuclear energy. Who wouldn't prefer bullet trains to bullets?

The only candidates in the 2016 race who might embrace these ideas are Bernie Sanders for the Democrats, and Jill Stein with the Greens. To help incubate a new politics of peace, though, a think tank co-founded by intellectuals Michael Lerner and Cornel West called the "Network for Spiritual Progressives" (NSP) has some good ideas. Against the grain of today's corporatized education system, for example, NSP believes schools should have at least one mandatory class each year that teaches students how to be kinder, more peaceful and humane: the kind of people less likely to start wars.

Dennis Kucinich, back when he was a congressman from Ohio, introduced a visionary bill in the house to create a cabinet level Department of Peace. If war is important enough to get its open cabinet post, don't you think peace deserves a fair shake too? Let's give peace a chance again.