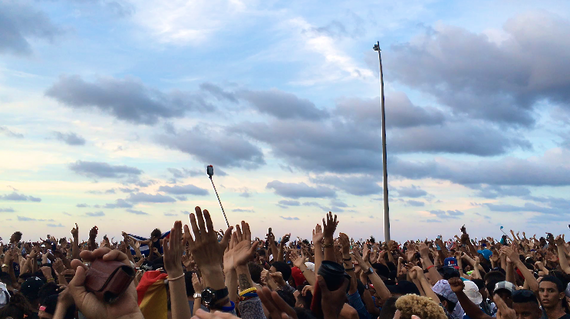 As the sun set on the Tribuna Antiimperialista last Sunday, half a million young Cubans dispersed into the dimly lit streets of Havana, some hopping máquinas or guaguas, but most leaving on foot. American DJ Diplo and Major Lazer had just concluded the first large American concert to take place in Cuba since the December 2014 diplomatic rapprochement between the two countries. (Questlove played in Havana in May, but for a much smaller crowd).

The concert was insane. It was alive. Stimulating. Happy. Hopeful. Half a million people were literally bouncing to the sounds of EDM for three hours under the hot Havana sun. Girls were up on shoulders. Selfie sticks waved in the air. The neverending crowd screamed along to Justin Beiber's "Sorry", Diplo's "Lean On", and Fetty Wap's "My Way".

Some flags flew, mostly Cuban, a few German, Colombian, Venezuelan, and others scattered about. There was one lone American flag flying, but it was not an incredibly inspiring sight. The concert was in a place literally called the "Anti Imperialist Tribunal", next to the new American Embassy where Cubans are denied US visas day in and day out.

These kids still had to wake up on Monday and head to class with homemade notebooks, or wait an hour for a bus to get to a job where they are paid next to nothing. Of course, this reality was not on anyone's mind. Cubans are pretty good at living in the moment. Diplo was playing for free on their turf -- what else could they do but enjoy the moment? So they danced. They jumped. They drank. They sang. They sweat. They hugged. And they took a ton of selfies.

Rolling Stone Magazine interviewed Diplo in Havana throughout his visit. The magazine commented that "for young people in Cuba, the easing of tensions with the United States means exposure to a slew of new information and culture." This is actually not true. The information and culture is already there, as one could tell by the crowd's extensive knowledge of Diplo's repoitiore. Information will hopefully become easier and faster to access, but it has been there all along.

We're talking about a generation of kids who played Mambo No 5 at their fifth birthday parties, who painted their nails black in 4th grade when Avril Lavigne's "Complicated" was all the rage. A Cuban friend of mine has a video of her 12 year-old self singing Miley Cyrus's "Seven Things I Hate About You" into a hair brush.

How? A lot has been written about the "El Paquete" process, so I won't go into detail, but essentially, Cubans get all their "outside information" (TV, music, movies, magazines, viral videos, memes, etc) from memory drives imported daily from Miami. Cuban kids hold on to their flash drives like their children -- knowing that it is their portal to the outside world. Whenever a friend comes over to the house, they plug in immediately, downloading what they need, and uploading what we don't already have. This has been going on forever. True, it's a bit faster in 2016, but it's not new.

That said, Diplo's team deserves a lot of credit for their understanding of the process and ensuring that his music and videos were incorporated into the weekly paquetes in the weeks leading up to the show.

When Diplo arrived on Cuban turf, though, it was more a symbol of how we, Americans, have changed, not a symbol of change in Cuba. We can pat ourselves on the back for the opening of relations, and Diplo deserves a ton of credit for being the first to open the floodgate. In the news, the concert was described as "landmark", "revolutionary", "historic", and it was. But we should interpret the concert's importance with the acceptance that the concert was not a tale of two countries. It was not a symbol of how Cuba has changed. It was, as one friend put it, "the opening of Cuba to the world."

For Cubans, it was cool that Diplo was American but it was more exciting part that his music is popular and the concert was incredibly dope. No one was quietly praising Uncle Sam for bringing the amped up sounds of Justin Beiber to the Tribuna Antiimperialista. People were just dancing, jumping and singing along.

The concert did make history. But "change", especially in regards to Cuba, is not a word we should throw around lightly.

I hope the footage of the concert helps dispel the myth that Cubans are "living in the past", because they aren't. It's 2016 in Havana too. Time travel doesn't exist no matter what car you drive or what radio you listen to. The concert didn't change Cuba, nor was it a sign of a changing Cuba. It was a sign of life in Havana, and it made young Cubans feel like they were part of the rest of the world. Most importantly, it shed light on what has been happening in Havana all along. Finally, the Americans are taking note.