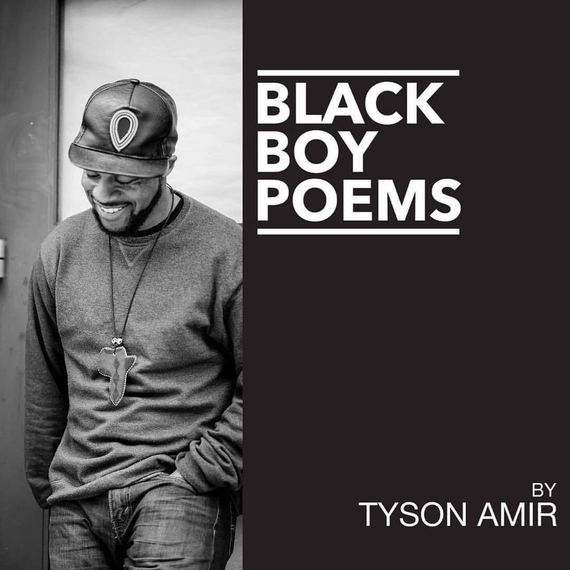 Bay Area musician and activist Tyson Amir has distilled a powerful essay's worth of ideas on race and culture into a four-minute spoken word poem that brings to mind the angry power of Beat Generation poet Alan Ginsberg and contemporary musician Saul Williams. Like many artists with activists souls, dating at least back to Paul Robeson, Amir believes in art as a tool for social change. Taken from his book, "Black Boy Poems," which was released on the 50th anniversary of the founding of the Black Party, "Between Huey and Malcolm" charts a history of repression and struggle that's long from won. Ignited by a quote from Black Panthers founder Huey Newton, "I do not expect the white media to create positive black male images." Amir mentions Michael Vick and George Zimmerman among others to contrast how the definition of justice isn't colorblind. His visceral imagery and gathering rhythm feel like the banging of the drums of war. A deep unease and unsettlement takes the place of a cathartic moment.

"Dig Your Own Grave" is the persistently catchy single from alt-rock Philly band, Spin. The video features a young blonde woman traipsing around Venice beach, both seizing the moment and looking for trouble. It's a familiar image, but like well-worn tropes, it still retains a certain effect. Distorted and driven by a driving central riff that stakes ground between playful and furious, the song is undeniably a throwback to a time when straight-ahead rock reigned. The other two original songs on the EP "Meant to Rise" pulse with a similar energy that draws the listener in with nostalgia. A brooding reimagining of Marvin Gaye's "What's Going On" feels like a jarring departure. A rap interlude in the middle further amplifies its odd-man-out feeling. That being said, as bizarre as it is, it makes for an intriguing listen.

Openly gay pop star Jordan Alexander sets the tone for her album "The Lonely Hearts Club" with the opening track "Take Me Out Tonight." The melody is filled with lift and hope but there's also a longing that drives its dance beat. The video, directed by her mentor Jarvis Church (Nelly Furtato), puts a new spin on the title as Alexander and her friends take her wheelchair-bound grandmother for a night out on the town in a red Cadillac convertible. Shot on the streets of Toronto, it pops with a distinction the Canadian musician needs to develop a unique voice. She sings with a pleasingly airy lilt, but there's a paint-by-numbers feel to sentiments throughout the album like "I don't ever really want to be without you" but it's also refreshing to hear a line like "something tells me to stay away from pretty girls with pretty hearts" sung by a woman.

A lot of Marty McKay's upcoming album, "New York City Dreams" trades depth for a slick musical veneer. Lyrics like "my soul is a ticking time bomb" on the song "Escape" lack subtlety. As a New Yorker, there isn't much of the city evoked here, and it's perhaps in generalities that the album drowns. The Zurich-born McKay began his career as a hip-hop turntablist, so the moody rock maximalist tone here is a stark departure. "Into the Fire" is the most fully-realized track with a powerful 80s-style melodic hook, but it's the final track "Until the Pain is Gone" that glimpses at a greater artistic potential. Regret and the painful desire to rewrite the past looms large throughout the track and then a prescient voice takes over. It's British philosopher Alan Watts: "The course of time is really very much like the course of a ship in the ocean...it leaves behind it a wake just the same way that the past and our memory of the past tells us what we have done." The past determines our future as little as the ship's wake determines its continued path. It's our folly to live under the illusion that fate is anything more than a human construct.

I don't know what Steve Hussey and Jake Eddy's politics are but as I was listening to their Americana-soaked album, "The Miller Girl," I couldn't help but think that bluegrass could be a link between the two increasingly disparate Americas. As a liberal New Yorker, I recoil when I see a "Make America Great Again" hat or hear people lamenting that there isn't a white history month, but I love the sound of the banjo and songs that reference county lines. The title track evokes the small familiar communities of Thorton Wilder's "Our Town" while "Looking for Love" is driven by a catchy fiddle riff woven into a smooth melody. As sweet as the music can be, the lyrics do wear thin with simple rhythms and story lines that feel unfinished.