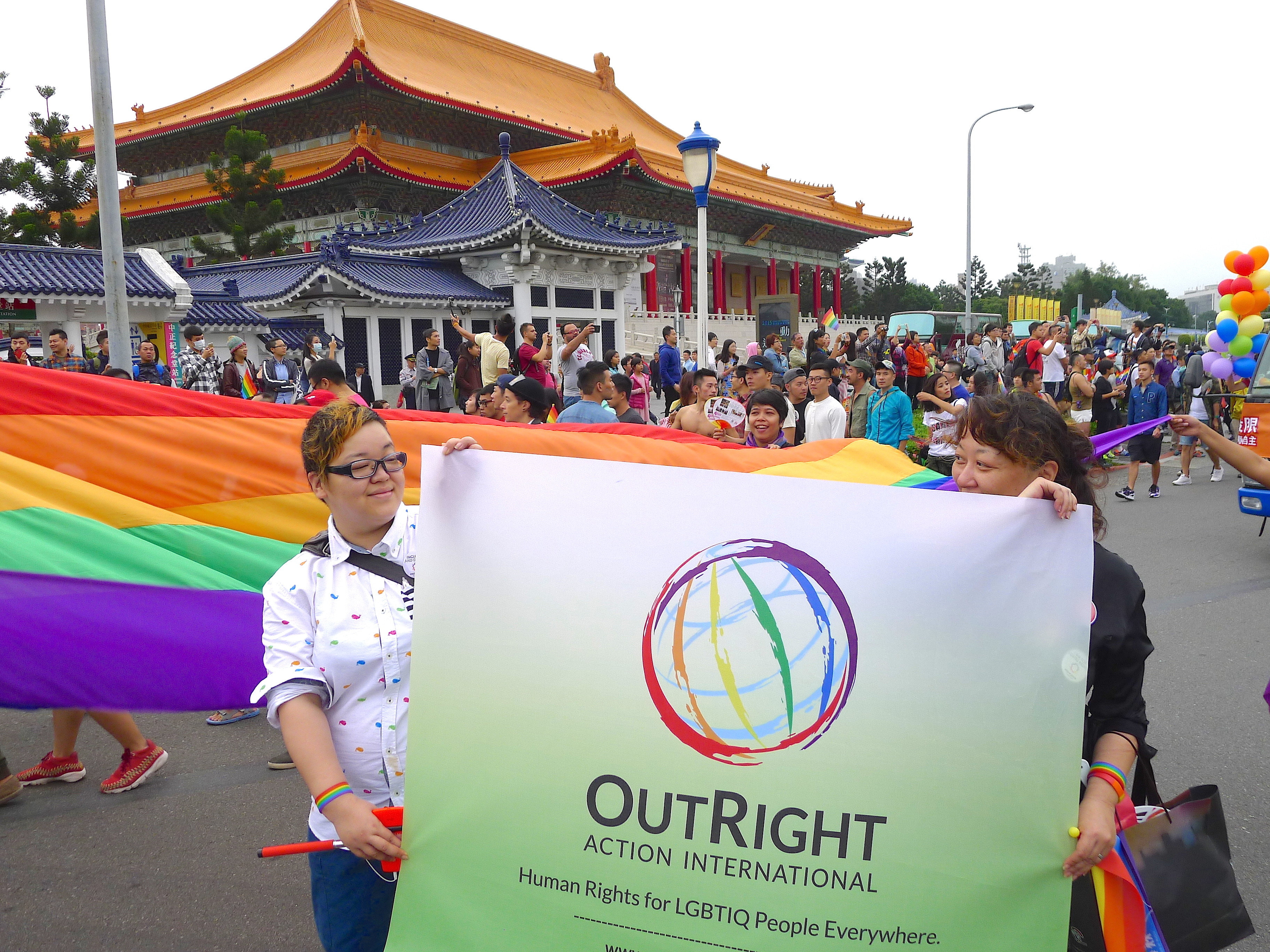 Shoko Usami, a lesbian anti-violence activist from Japan cried openly when she saw the multi-colored handwritten sign, End Violence Against LGBTIQ! held by Ging Cristobal from the Philippines, my colleague and project coordinator for the Asia Program at OutRight Action International.

I was so moved to see a sign with such a clear message about ending violence because at the LGBTIQ Pride Parades in Japan, such signs are seen as too negative. As LGBT advocacy moves towards same sex marriage and [trans] gender equality, there's less and less focus on violence against LGBT persons. At the same time, national women's movements in Japan omit LGBTIQ, they just forget about us. This sign reminds me that this is exactly what I want to keep advocating while I celebrate my pride.

The seriousness of signs like End Violence Against LGBTIQ!, I'm Lesbian and I'm Halal, Repeal 377 Now and Justice for Jennifer Laude, balanced my cheer amidst the surge of LGBTIQ humanity during the 13th Taiwan LGBT Pride Parade through downtown Taipei -- the largest pride parade in Asia with 78,000 participants.

I thought, how far have Asian movements for LGBT rights come and how are we measuring success? An activist colleague in Malaysia, Pang Khee Teik noted, "The State finds it safe to allow gay people to be gay through market economies but it doesn't allow political pressure or advocacy for rights." An activist from India observed that in countries where social shame is used to control sexuality, politicizing LGBT issues brings the spotlight on people who are averse to this kind of attention and feel more at risk because of increased surveillance by members of community, family and religious groups.

It's seductive to think that being able to march down a city street without violence signals progress. But how much have we progressed when it is "safer" to march in anonymity and be "out" among strangers than to face a family member, employer or neighbor? What can we say about progress when legislatures are willing to recognize same sex marriage while family and community routinely use violence and discrimination to enforce conformity to gender and sexual norms?

Which raises another aspect of measuring success. As much as there has been forward momentum on LGBT rights in Taiwan, Viet Nam, Thailand, Cambodia, Nepal and India where laws and policies are changing on LGBT rights, there's also pushback from governments across Asia -- from Brunei to Malaysia, Singapore to South Korea. Stephen Leonelli from the United States, speaking at the Sixth ILGA Asia Conference preceding the LGBT Pride Parade, said, "Governments in Asia are starting to enforce, draft or propose policies and legal restrictions to officially and unofficially create a difficult political environment for LGBT and other civil society organizations to operate -- to curb growing advocacy for LGBT rights."

Then there is the jubilation around successful legislative measures and court rulings in Asia on transgender rights. How do we measure success when there's legal recognition of transgender identity while adult consensual same sex relations are still criminalized and/or socially castigated? It often means that gender variant people cannot have sex with same sex partners -- in other words, transgender people are coerced into heterosexual relationships and expected to have the kind of sex deemed not to be "crimes against nature" -- that undefined concept taken to mean only reproductive sex. In the past, women's sexual rights movements fought against the desexualizing of women's rights when states limited women's bodily rights to childbirth and sex within marriage while denying and penalizing women for abortion, sexual relations outside of heterosexual marriage, lesbian sex and single motherhood. What does it mean when Pakistan, India and Bangladesh grant gender recognition on legal documents and social welfare benefits while ignoring sexual rights?

Indian activist Danish Sheikh suggests the need for recalibrating the strategy to decriminalize adult consensual same sex relations in India by asking for ministerial directives that will ensure state governments and police will not only recognize third gender classification when they implement the Rights of Transgender Persons Bill, passed in April 2015, but also apply the Bill to transgender people's right to same sex relations. This approach would build on the success of the transgender rights movement and provide an entry point for cross movement advocacy on decriminalization of homosexuality.

The same could be said about Nepal where LGBT activists celebrate the inclusion of sexual orientation as prohibited grounds for discrimination in the 2015 draft constitution. And the inclusion of a third gender option for passports, makes it possible for gender variant people in Nepal to apply for passports without being constrained by the male-female gender binary. Unfortunately, this advance in gender equality is not reflected in mothers being able to pass citizenship rights to their children. Nepal guarantees fathers this right but is tentative about recognizing the same right for mothers. It would be great if advancing gender equality in Nepal can apply to all transgender, non-transgender, lesbian and bisexual women.

Intersectionality, a concept I first heard in the 1990s from feminist women of color refers to experiencing crosscutting discrimination and violence on the basis of one's different marginalized identities because of underlying conditions. Success for LGBT rights has to be measured not only as compartmentalized rights on the basis of sexual orientation, gender identity and gender expression, but in the context of the many common structures of domination that prevent equality.

Join OutRight Action International on December 12 in New York City for OutSummit, a gathering of LGBTIQ activists from across the world. This one-day conference brings together U.S.-based and international activists for dialogue and workshops on sexual orientation, gender identity and intersex issues and rights. Celebrated Ugandan activist Kasha Jacqueline will deliver the keynote address. Registration is limited. First come, first served. Register here.