Today, the Supreme Court legalized same sex marriage in all 50 states. I was lucky enough to be there for the announcement. For a few hours, one would have been hard-pressed to find a happier place on earth than the steps of the Supreme Court building, where hundreds of activists and members of the media co-mingled and reacted to the landmark decision.

In the midst of the throngs of cheering and laughing and joyful tears, a lone woman stood near the steps with a huge sign in front of her, ranting about homosexuality destroying our country, the threat against religious freedom and every other sound bite out of the greatest hits collection of anti-gay hate mongers. She looked like your average middle-aged person. Nothing out of the ordinary. She could easily be your nextdoor neighbor.

She had a small crowd gathered around her, some bemused, some simply observing. Her shouting was incessant, attempting to linger over the melodic chatter and singing of the rest of the crowd.

I stopped to look at her alongside two dozen or so folks, and as much as any previous instance of a person like this would have boiled my blood, I realized that I just couldn't be angry in that moment. I was far too happy. Everyone around us was happy.

I thought of the couples who had lived together for decades -- some of them a half-century or more -- and waited for their government to come around in validating their humanity.

I thought of Matthew Shepard, the 21-year-old gay man who was beaten and tortured and left to die on a roadside fence in rural Wyoming in 1998 and how shattering that was to the national conscience, but not shattering enough to prevent what has become an ongoing persecution of LGBT young people.

I thought of the 13,650 members of the U.S. military who joined to serve and defend our country, only to be humiliated and discharged under "Don't Ask, Don't Tell" before its repeal in 2012.

And I thought of those folks for whom today did not come quickly enough, whose partners have passed on, never having had the chance to experience the often taken-for-granted dignity of a family and home that are recognized and respected by the law.

I thought of these things as scores of joyous souls danced and sang and waved pride flags all around us, right in front of the Supreme Court, where a woman's right to choose was successfully defended, where schools were desegregated, where the ghosts of the old, racist south were ordered to sit down and shut up.

I thought of how much hatred our country has overcome, hatred manufactured out of the most petty, unjustified, bigoted, hateful reasons.

And then I heard the woman's voice again.

She said this: "We are destroying our Christian nation, and now, anyone can marry anyone they want..."

And the pent-up joy of the occasion came over me, and I burst out: "WOOOOOOOOOOOO!!! YEEEEAH!"

She stopped and looked up at me, shocked. People laughed. She tried to continue, but the moment had shaken her. She stumbled over the next few words, and the lovely sounds of everyone else enveloped the tight space.

I wanted to hug her because I almost felt sorry for her. On this day, not even her miserable hatred could affect the rest of us. She had become an expired parody. She had lost relevance. She and the millions like her had become ghosts in that moment.

And she knew it. And we knew it.

God bless a country in which ignorance can be expressed freely and held accountable by the goodness in the rest of it. 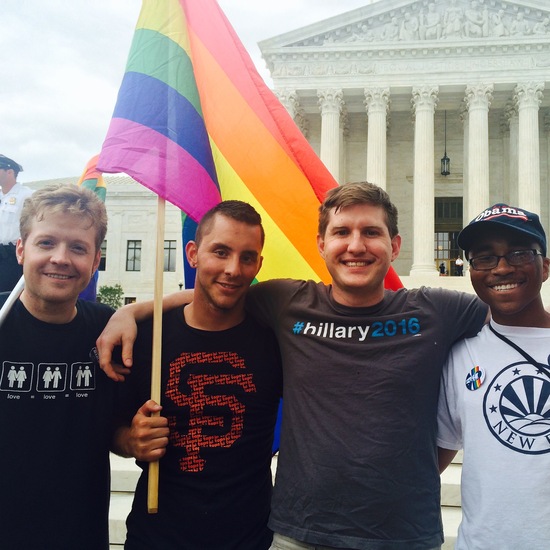