Early last month, when Hannah Anderson was abducted by James Dimaggio, Southern Californians experienced the new Amber Alert cell-phone alert, a text message accompanied by a loud piercing notification sound sent directly from cell-towers to anyone in the vicinity of this abduction. People complained and there was immediately a controversy about the effectiveness and usefulness of such an intrusive system.

But most people, I suspect, will be willing to endure the noise if it might mean saving an abducted child -- especially since Hannah Anderson's rescue came as a direct result of strangers in Idaho knowing about her abduction -- because most people care about children and understand the collective responsibility we all share to take care of them, whether or not we have legal or biological connections to them.

I must be. Because if that were true -- if we really felt responsible for other people's children -- then how could so many children be in so much peril for so many reasons? If we had alerts for all the neglected and abused and exploited children, the noise would be unbearable.

I think, actually, that a lot of people are sick of this idea of collective responsibility, and I understand because it is hard as hell just to take care of our own children and ourselves.

Child abuse and neglect and exploitation are often the result of someone else's personal failure. We resent being told it is our burden. We want personal accountability. And we certainly don't want to reward or indulge irresponsibility or selfishness.

I remember my first year as a teacher when students would bring a baby to school with them. Mostly it was girls who would show up and apologize and say that they couldn't come to class because their childcare for the day -- usually their mother or grandmother -- didn't pan out. And I found myself welcoming them into the class if they agreed to make an honest effort not to be too great a distraction. I didn't want these girls to feel like pariahs because they had become teenage mothers. Surely they'd received enough criticism and were certainly, at least to some degree, experiencing the consequences of their actions. Mothers -- whatever age and circumstances -- should be supported and encouraged by others in their community. But I couldn't help wondering whether my acceptance -- of them and their babies -- I was sending other girls in the class the wrong message. I still don't know what I should have done or what I would do today (I no longer have to make such choices since my school administration now keeps babies off campus).

Moral hazard -- that's the term we use to argue against bailing out a poorly managed, greed-driven banking institution, or someone to whom one of those banks sold an impossible mortgage before the fall of 2008. Bailing them out just encourages that kind of irresponsibility in the future, doesn't it? For banks and teenagers.

"Don't have children if you cannot take care of them," we want to say. Don't expect the rest of us to pick up the slack and compensate for your mistakes.

I'm not sure any of us is unjustified in feeling that way.

But I'm also not sure what any of us gets out of feeling that way. I'm not sure why empathy is so out of fashion. 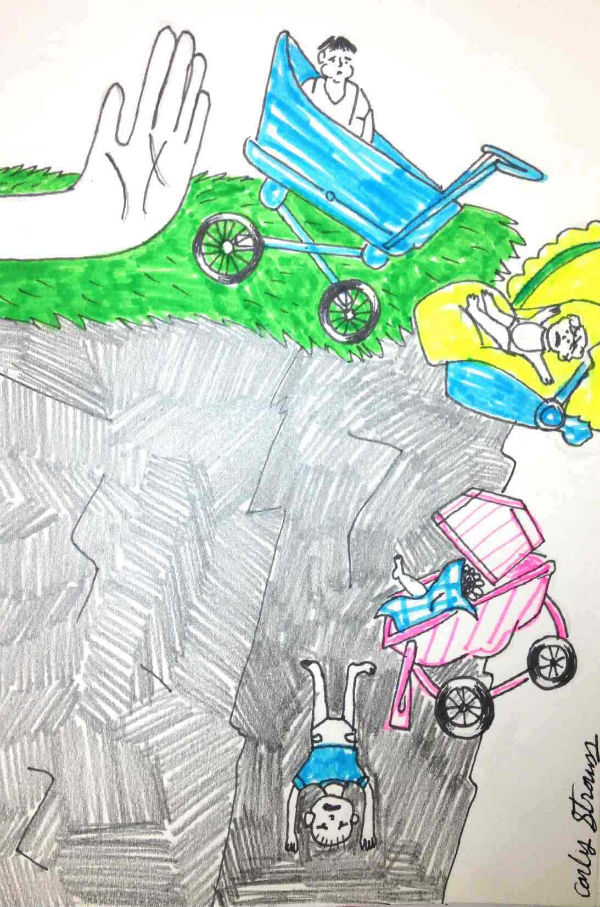 Is it a lack of imagination that keeps us from asking ourselves, What if that were my child? Or, What if it were me growing up in those conditions?

Those of us who work with some of the children who are not being well taken care of by anyone -- children who somehow aren't getting enough to eat and don't have a home in which they live on a regular basis, children who were born in emotional and economic free-fall -- appreciate the enormity of the problem. It can overwhelm us. Try eating a snack between classes and watch the quiet hungry eyes of students walking in the room. Organize a field trip that costs money and watch who can't make it. See who shows up for parent night with an older brother or sister because there is no parent available. See which children call their teachers Mom and Dad (some just do it as a sign of affection but others are seriously hopeful that they will somehow get some part of their vast emotional emptiness filled).

Those of us who've seen all of this know the potential cost of neglecting our most neglected children. We know what can happen to them. We've seen it. I don't even have to list the awful possibilities, do I? But we also know the other possibilities. We know what these children can do if someone steps up and takes an interest and gives a damn. I had a student whose mother had a psychotic break and never recovered. His father was a gang-banger. The young man was being raised by a woman he called his grandmother but later told me that she had no blood relation to him. She was a neighbor who had taken an interest in him when she saw that he didn't have much of a home and offered to take care of him for the father who was in and out of jail. This young man stayed out of trouble, graduated high school and went to college because that woman and her husband gave a damn about someone else's child.

This example is not uncommon. I've seen it dozens of times. Just yesterday I had a long talk with a student who has been raised by a whole group of concerned adults. I know teachers who've taken students in to keep them off the streets and out of the foster care system. When you have your own children and you know how fragile kids are -- physically and emotionally -- so much of the time, it is heartbreaking to imagine a child lost and alone in the world.

Sometimes I want to weep for them. My first month as a teacher I did.

I still remember the day. I was a substitute having a really rough time of it. The children in those classrooms were so hostile and seemed so lost. Partly it was my inexperienced eyes and ears and heart overreacting to the bravado of inner-city 11- and 12-year-olds, but there was a sadness to many of the children. Some of them smelled unwashed. They looked hungry and terrified and confused. Unable to get past their wildness and hostility I felt impossibly inept at being able to help any of them.

My last day of a week-long assignment, I went out to eat lunch at a taco stand. I sat alone and found a stray newspaper and read it to take my mind off of things.

The first article I turned to was about a 3-year-old in critical condition after being hit by a stray bullet from a gang battle. The child was asleep in bed when the bullet came through the first floor window.

At the time, my daughter was three and I couldn't stop imagining that it was her. I burst into tears and sat there sobbing over my tacos.

Veteran teachers looked up from their burritos and combination plates and stared at me with mild sympathy. Probably thought I was traumatized by the stress of being a middle school sub. Probably some sub or rookie teacher sat in that seat once or twice a week weeping.

I wanted to stand up and say, no, this isn't about me. It's about the children. I'm weeping for all the children we lose because we just don't care enough, but I knew I would sound stupid and pretentious saying that to people who had been in the trenches of that middle school for 10 or 20 years.

It felt good to cry at that taco stand. I felt cleansed of my 20th century human cynicism. I felt like I had elevated my consciousness. I had stopped and taken notice of the awfulness at which far too many people shrug.

Now I'm one of the veteran teachers who, if I ever saw a sub or a rookie crying at a taco stand, would stare and feel mild sympathy and maybe a little contempt because I'm too busy trying to do something for the few children I might somehow be able to help and because whatever I do so often seems so pitifully inadequate.

A few months ago, in Muskegan, Michigan, a young woman named Carmesha Rodgers was shot in the head - and almost killed -- rescuing a group of children caught in the crossfire of a gun battle.

Not a single one of those children was her own. She didn't even know them all. "I'd want someone to do that for my kids," she later said, though she has no children.

It is awful that we live in a world in which people recklessly shoot guns at each other with no regard for the children who might get killed or injured.

And it is hopeful that we live in a world with people like Carmesha Rodgers.

Her heroic act should be a message to all of us. Let's sound the alarms and keep them ringing.