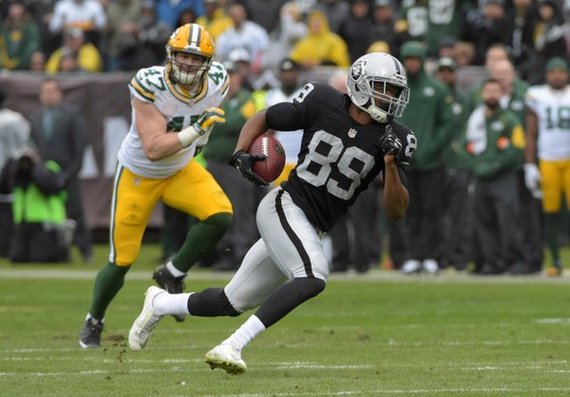 Oakland, CA - The Raiders have been knocked out of the playoff hunt. The Green Bay Packers leave Oakland unscathed, staying atop the NFC North with a 30-20 win over Oakland. Despite losing their lead, the Packers dominated the second half by outscoring their opponent with a touchdown and three field goals by Mason Crosby.

Derek Carr didn't have his best game, he threw two interceptions in the first quarter that led to an early 14-0 Green Bay lead. He made up for it in the second when he got his team back in the game despite losing some help along the way. Oakland lost Michael Crabtree, Seth Roberts and Mario Edwards Jr. with injuries.

"Mario, obviously, has become a real key member of our defensive front and having him go out early like he did definitely was a blow," said coach Jack Del Rio.

Both Edwards (neck injury) and Roberts (abdominal injury) did not return. Crabtree was temporarily sidelined with concussion like symptoms but returned in the third. Sebastian Janikowski kicked two ( 23-yard and 30-yard) field goals. But it was a big play by Charles Woodson late in the quarter that changed the game.

The Raiders caught a huge break with 1:22 seconds left in the second when Woodson made a hit on James Starks, who fumbled the ball. Carr scrambled for 17-yards setting up his 19-yard touchdown pass to Cooper making it a 14-13 game to end the half. He did enough to make up for a horrible start but the damage was already done.

"You can't dig yourself a into a hole early like that," Woodson said. "We gave them 14 points early on in the game. Those kinds of mistakes kill you as a team. We gave ourselves a chance but we didn't come out with it at the end like we needed to."

Carr threw a pass intended for Clive Walford but was intercepted by Micah Hyde who ran it back for 34-yards. That setup Jon Kuhn's 5-yard touchdown giving the Packers a 7-0 lead. In the next series Carr overthrew Roberts, landing in the hands of Damarious Randall with the pick 6. That's a total of 11 interceptions for Carr this season.

Oakland's defense was still outstanding despite the team's 10 penalties resulting in 95 yards. They kept the Packers from scoring in the end zone. Crosby kicked three field goals in the second half while Aaron Rodgers threw one touchdown. Carr found Cooper twice for two touchdowns but it wasn't enough to be eliminated from the playoffs for the 13th straight season.

Carr found Cooper again in the third for a 26-yard touchdown pass in the end zone. But Rodgers dominated with three quick passes before he found a wide open James Jones for a 30-yard touchdown making it a 24-20 game in the third. After blowing a 14-point lead with multiple failed attempts getting into the red zone.  They did just enough to stay ahead.

Cooper finished with 6 receptions for 120 yards, marking his fifth 100-yard receiving game tying him with Keenan Allen for the most by a NFL player 21-years old or younger. He's the first rookie with 100 receiving yards and two receiving touchdowns against Green Bay since Randy Moss in 1998.

While Cooper would've rather celebrated a victory, many of his teammates agree that a 6-8 season does not define who they are as a team. The fourth quarter hasn't always been easy for the Raiders this season but most of their games they've competed until the end. Unlucky today, Oakland must finish the season strong, they have a short week as they host the San Diego Chargers Christmas Eve.

"We wanted to win the division," Latavius Murray said. "That was our goal, and we didn't do that. We wanted to play in the postseason, and we came up short. We're not happy with that. We're not satisfied at all."