Sometimes too much love can be a bad thing as Paris discovered on Sunday when thousands of "locks of love" attached to a footbridge caused part of the railing to collapse, forcing an evacuation.

Thousands of lovers from across the world visit the Pont des Arts every year and seal their love by attaching a lock carrying their names to its railing and throwing the key in the Seine.

But police were forced to hurriedly usher visitors off the footbridge in central Paris early Sunday evening after 2.4 metres (yards) of railing collapsed under the weight of the collected tokens of affection.

An architect and local officials rushed to the site and a barrier put in place to stop further access. Police said the bridge would be re-opened by Monday.

The Pont des Arts crosses the French capital's river Seine just in front of the Louvre museum and is known the world over for its "locks of love".

The phenomenon has become something of a headache for officials in the City of Light, who would prefer something that poses fewer problems of security and aesthetics.

Two young Americans living in Paris have gathered thousands of signatures for a petition they launched in March calling for the locks to be removed, saying they are eyesores and cause damage to the bridges.

The locks only appeared on the Pont des Arts in 2008, having already become a craze in Germany, Russia, China and particularly Italy.

Today, the full 150 metre length of the footbridge is covered in the locks, and the practice has spread to other bridges around the capital.

Forty locks were also recently removed from the Eiffel Tower. 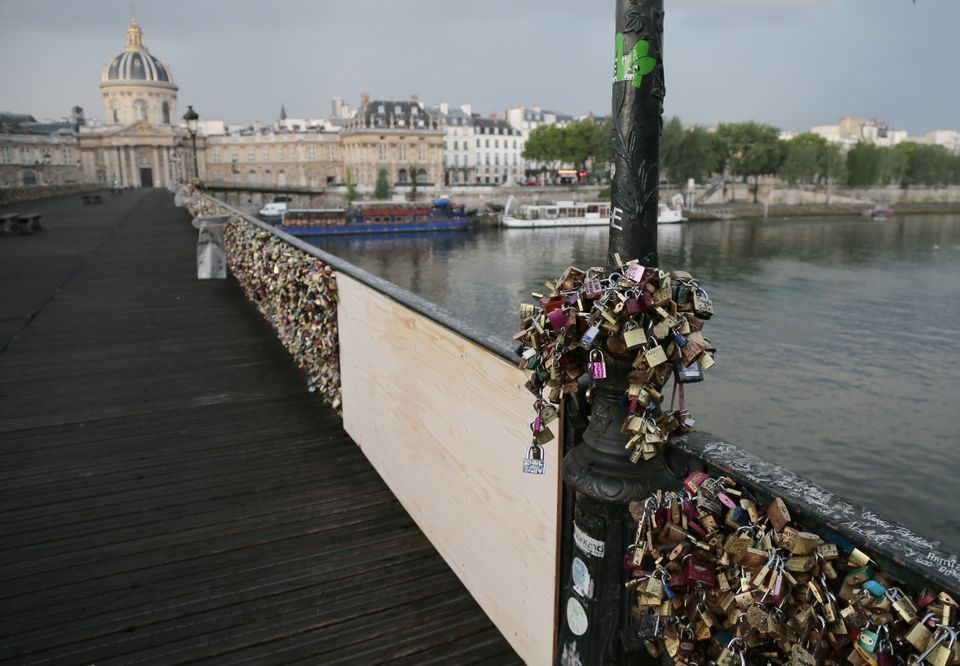 1 / 9
A photo taken on June 9, 2014 shows 'love padlocks' attached to a fence of the Pont des Arts bridge over the Seine river in Paris. (JACQUES DEMARTHON/AFP/Getty Images)
Getty Images