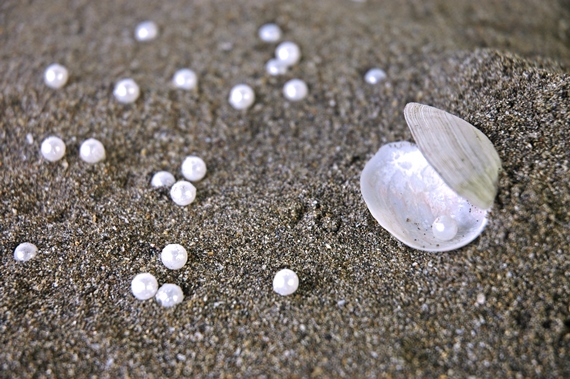 "We are all from the highest to the lowest slaves of one master, Pearl," such were the words of Mohammed bin Thani, ruler of Doha in 1863 (Carter, 2005). Present in the Gulf for 7,000 years, pearling became the region's central industry in the late 18th-early 20th century. It deeply impacted the social structure and economic relations with both East and West. By looking at the past we shall see how the technology of production today, particularly in the United Arab Emirates, offers more favorable conditions for success in the industry.

Source of IncomeTo start with, how much did the Gulf population in fact depend on pearling? On the one hand, the pearling centers of Bahrain and Julfar (the former name of Ras Al Khaimah) had significant water supplies and sufficient agriculture to sustain large populations (Carter, 146). At the same time, pearling contributed a significant portion of the population's income. The famous traveler Ahmad ibn Majid, a native of Julfar, remarked that 15th-century Bahrain fleet had some 1000 ships engaged in pearling (Carter, 146), which hints at the impressive scale of operations.

Pearling Fostered Unprecedented GrowthPrior to the 18th-century pearl boom, the cities of Dubai and Abu Dhabi had only temporary settlements which came to life as the pearling season began (Carter, 175). There could be little economic activity when agricultural products and, most importantly, water, had to be imported. Driven by the foreign demand, the developing pearling industry was transformational to the inhabitants. It provided a green light for the successful foundation of Abu Dhabi and Kuwait City, since the revenue from operations was high enough to pay for the essential imports of water, agricultural products, as well as various manufactured goods (Carter, 151, 189).

Specifically in the emirate of Abu Dhabi, as the activity became a more prominent source of income, the structure of the society changed. The groups of Qubaysat and Rumaythat, previously engaged in camel herding and date farming inland for centuries, almost entirely abandoned these occupations and moved closer to the coast to become professional pearl divers. The seasonal activity became a year-round profession, and during the colder winter season when pearl hunting was not possible in the Gulf, the divers sailed as far as Ceylon for their operations (Carter, 154, 183). Estimates suggest that at the beginning of the 20th century, half or more of the population of Ajman, Dubai, Abu Dhabi and Qatar were involved in the pearl trade, which could mean almost entire male population in the region!

Risk TakersWhile the trade was profitable, it was by far not an easy profession. There was no guarantee that men who left their homes for more than four months every season would come back. Even though the water in the main diving season ghaus al-kabir, running from mid-May to early October, was the warmest, the first ten days of diving imposed a severe test. The author of nine books on the Emirati heritage Juma Khalifa bin Thalith explains that in the first days at sea the men had to overcome nausea and sea sickness in order to adjust their bodies to the numerous long dives. And lengthy they were indeed. The divers worked for 12-14 hours a day at sea, descending five consecutive times and resting on the sixth. The process went on repeat. The high skill also had to match fortune. If one diver brought a hundred pearls to surface while another only twenty, the latter did not get a friendly look from the captain.

Hard labor and unpredictable sea conditions were not the only challenges. Boats had to procure enough pearls to repay for equipment and provisions purchased at the start of a trip. Low income made borrowing a necessity, and a bad season meant an aggravating debt for the boat team (Carter, 142).

Decline and RebirthPearling, which shaped the economy of the region for many centuries, was soon affected by a number of events. Japanese entrepreneur Mikimoto invented cultured pearling which provided a cheaper version of the good. However, no less severe shock resulted from the Great Depression. The shrinking American demand for pearls strongly impacted the Gulf trade, since in the first two decades of the 20th century New York was the second largest emporium for the Gulf pearls after Bombay (Carter, 188). Then the Second World War increased the prices for boat equipment and provisions, and the higher cost of operations made it more difficult to repay the debt.

The oil boom was the last decisive factor that drove the closure of the industry. However, it is no longer true to say that pearling remains only in the realm of tourist attraction. A different, modernized industry is paving its way in the Gulf. Specifically in the UAE, entrepreneurs such as Abdulla Al Suwaidi started growing the new cultured pearls. Al Suwaidi, whose grandfather was a pearl diver, opened a farm in Ras Al-Khaimah that now produces some 40 thousand pearls equal to 24 kg a year.

The number may seem incomparable to the 2014 harvest of 20 tons of Akoya ,the classic Japanese cultured pearl. However, quantity is only a matter of time. Specifically in the Gulf, as Al Suwaidi explains, temperatures are much above the world's average, and the pearl can be grown in three to four months, compared to twelve or thirteen months required in Japan.

Comparison of RiskWhile in traditional diving the harvest was limited by human effort as well as natural resources (overfishing in the Gulf was a common issue and caused a significant rise in the price of pearl in the 19th-early 20th century), the cultivation of pearls, on the other hand, offers a controlled environment as to how many pearls can be produced. In this way, modern pearling is more capable to meet the rising international demand for the renowned jewel without adding to inflationary pressures.

Describing the growth of his company Arabian Pearl Holdings, Al Suwaidi did admit an initial risk factor. It took the entrepreneur some ten years to gain ground in the industry and see the result of his substantial investment. Uncertainty should be expected, given the world's competition in the business.

However, distribution of risk today is more cushioning than in the past. While setting a pearl farm certainly requires time, careful planning, and substantial resources, it is a one-time investment at the start, which has a potential to succeed if the management and strategy were chosen right. In the past, on the other hand, the venture required multiple investments at the start of each season. And while the resources involved were smaller, they were still a significant sum and required borrowing every time. The risk was also less manageable, as the harvest depended not only on the skill of the divers and management of the boat crew, but also on unpredictable weather conditions and sheer luck of finding anything at the depth of ten meters. Such uncertainty before every season and high chance of long-term indebtedness left little chance for pearl divers to purchase anything beyond the basic necessities for themselves and their families.

Artificial versus NaturalOf course, it may be debatable as to how "original" the cultured pearl is given human factor in production. However, the process offers room for experimentation. It is not only the perfect, round and lustrous pearls that bring joy to the farmer. Mohammed Al Suwaidi, the co-founder of the cultured pearls farm RAK Pearls, is particularly fond of irregular shaped blue-colored pearls. These baroque formations are also called keshi pearls and occur as a by-product in the cultivation process, which makes them close in origin to the natural pearls. It may be surprising, but such pearls also have a potential to bring high returns. An Arabian pearl ring by the famous designer Ornella Iannuzzi's "Uprising" baroque ring, won her two prestigious gold awards at the 2015 Goldsmiths' Craft and Design Council Awards.

The UAE therefore holds the necessary technology to reestablish itself as a major pearl production center. Due to propitious weather conditions for cultivation and controlled growing environment, farmers can now meet the local and international demand much faster than in the old days. With every pearl sold, the farmers will pass to customers the memories of the country's ancestors, who were as close to sea as one can possibly get, making their living from the jewel so elusive at the time.

I thank Robert Allen, University of Oxford and New York University Abu Dhabi, for sparking my interest in the topic.