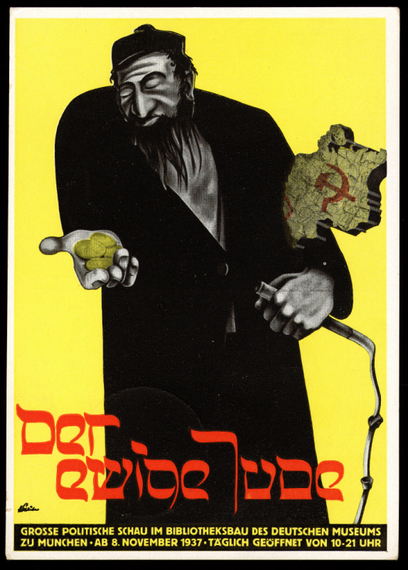 Cartoons have a long and storied tradition in political culture. They can provoke laughter at human foibles, deflate pompous politicians, expose corruption, or galvanize public support around a cause. Cartoons can speak truth to power.

But they also can incite hatred and spread lies.

In this last category fall the drawings that recently were displayed in Tehran as part of Iran's Second International Holocaust Cartoon and Caricature Contest. On May 30th the winners were announced before an audience that included governmental officials. Although Iran's Supreme Leader, Ayatollah Ali Khamenei, did not attend the ceremony, his office congratulated the organizers for an "excellent" event.

Adding further insult to injury, Tehran just announced a new cartoon contest on the "Zionist caliphate," which will promote the outrageous claim that ISIS is in cahoots with Israel. Foreign Minister Mohammad Zarif's counter-claims notwithstanding, these competitions receive financial support and approval from the Iranian regime. They serve to incite hatred against Jews and against the State of Israel. What purports to be anti-Zionism here is really antisemitism.

Let's start with the last year's announcement for the Holocaust cartoon competition. Its organizers publicly stated that "We Don't deny Holocaust, We are not Antisemite [sic]." This was then quickly followed by a "but."

When someone begins a sentence with, "I am not an antisemite, but," what usually follows is anti-Jewish rhetoric. In this particular case, the Iranian spokesman declared that the contest aimed to address three issues: western hypocrisy about freedom of speech by denying scholars and historians the right to "consider the Holocaust;" that Palestinians are being forced to pay for the Holocaust; and that the Iranian organizers are concerned about other "Holocausts," such as "Atomic Holocaust (Holocaust in Iraq, Syria, and Gaza)."

The point about freedom of speech is highly ironic since Iran ranks as one of the world's worst violators of this fundamental human right. Iranian journalists, cartoonists, and activists are routinely arrested or driven into exile when they run afoul of the regime. The state ruthlessly blocks alternative sources of information, including websites that provide accurate information about the Holocaust.

Now, let's consider some of the drawings. A number of the competitors in the Holocaust cartoon contest drew on a long and hateful lineage of antisemitic illustration, including that of Nazi propagandists. The classic stereotypes that are centuries-old and helped lay the groundwork for the Holocaust were all there: money-grubbing Jews, Jews as blood-sucking vampire bats, Jews as killers of children, Jews as malevolent string-pullers, and Jews as an alien body exploiting a native population.

The submissions to this and the previous such contest speak volumes. In 2006, one prominent Iranian cartoonist depicted Orthodox Jews revolving through a mechanical counter in order to reach 6,000,000--a direct accusation that Jews today fabricate or exaggerate Holocaust victim statistics.

The winner of this year's best cartoon was "Shoah Business," by the French visual polemicist, Zeon. His drawing displays a cash register, stuffed with $6,000,000 from the "sale" of the Holocaust. On top of the machine is a model of the gate to the Auschwitz-Birkenau killing center, where one million Jewish men, women, and children were murdered. In this case, Jews are portrayed as profiting from the Holocaust.

The vitriolic nature of Zeon's cartoons has generated applause from neo-Nazis and other antisemites and legal complaints charging that his antisemitic caricatures constitute incitement to hatred. His best known works play on two vicious anti-Jewish stereotypes: the Jew as child-killer and as Satan. These two images sometimes appear as posters in European "anti-Zionist" demonstrations.

It is not surprising that Zeon took home first prize for "Shoah Business." The Iranian regime consistently espouses Holocaust denial. Just this year, its Supreme Leader, Ayatollah Ali Khamenei, released a video on International Holocaust Remembrance Day stating that it is unclear whether the Holocaust was a "reality" and that, even if it was a "reality," it is unclear how it happened. Not surprisingly, Khamenei helps to fund the International Holocaust Cartoon contest.

For deniers and other antisemites the Holocaust is a myth concocted by Jews as part of an elaborate plot to gain power and to stifle criticism of their alleged global machinations. Several of this year's submissions promote this conspiracy theory. Another submission that warranted special mention by the judges shows Jews with long beards and traditional black garb carving up "Holocaust" sausage for a panting Pavlovian dog responding to their cues.

Why should we care about this competition? What happens in Tehran doesn't just stay in Tehran. The Iranian regime eagerly promotes these messages abroad. And these same anti-Jewish tropes and canards are helping to fuel antisemitic violence today. Not all the blame can be attributed to Tehran (sadly there are many such sources of incitement), but the cartoon contest give such views legitimacy and rewards caricaturists for spewing hatred.

There is a global market for such propaganda. Recent scandals involving British Labour Party politicians, who charged that Zionists are child killers, Nazis, or the arch-conspirators behind ISIS attacks, show the pervasiveness of this type of antisemitic analogy in contemporary political and public discourse. On American college campuses today one encounters similar rhetoric and disruptive protests against Jewish-sponsored events.

Words and images have consequences--so does silence. By not condemning Holocaust denial and other forms of antisemitism we help to breed indifference to hate. In today's climate of increasingly brazen intolerance, we can't afford that.