Here's another one of those over-50 issues where I genuinely need help to understand.

Why, and when, do we mature folks decide to have sex? I know we can and do, because Diane Keaton crafted an entire dreary second career making movies about the fact that older people have sex. Most of us who have genitalia already knew that, but somehow it needed to be verified on screen to make it real.

But I also read in popular articles, that men "become sexually invisible" after 55, and women perhaps a bit younger, so I was worried there for awhile until I realized sexually invisible didn't mean we stopped having sex, it just meant the media stopped wanting to talk about it. 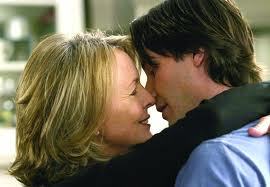 Yes, I am fully (painfully) aware of the many legitimate differences between women and men on this subject, so a Mars/Venus lecture probably isn't necessary.

And I don't like to generalize, so when I hear people say sex is more of an emotional attachment for women than men, I get uncomfortable because I know that's not always the case, and I certainly know of men who emotionally clamp on after sleeping with a woman and women who are perfectly happy to go on their merry way after sleeping with a guy.

There's also a disconnect between what people say about their stated desire to have sex and how they behave (duh!). I grow weary of these over-50 women claiming to yearn for "my very own Christian Grey."

I didn't sleep with my ex-wife until six months after we met. I slept with my ex-fiance on our first date. Both of those turned into long-term relationships. Both ultimately didn't work out. I can assure you, the demise of these relationships had absolutely nothing to do with when we went to bed for the first time.

I am of the (minority) opinion that if there is attraction, if there is a level of trust -- it doesn't have to be absolute (was it in your marriage?) -- and if there's no reason to believe one of you is a serial killer (there really aren't too many over 50), then, Do It! And do it sooner rather than later.

So what are the reasons? Here's a few (and "he" and "she" are interchangeable...)

1. Is it because you feel he will think less of you? He won't. That weird mythology continues to be passed down over the generations, and I wrongly thought that 55-year-olds wouldn't buy into it. Many still do.

2. Is it because she won't want to pursue a relationship if you appear too eager to hop into bed? If she doesn't want to, she won't regardless of when you decide to make that move.

3. Is it because if you get to know each other better before having sex he's more likely to appreciate the holistic view of you that goes beyond your body?

4. Is it because sex without love is a meaningless experience?

6. What are the other reasons?

I'm on the record as saying that physical attraction remains (almost) as important at 50 or 60 as it was at 20 or 30, and even though some of us will be blessed to have working parts forever, some of us won't. I play football and climb mountains and bike -- more now than 20 years ago -- because I believe in taking full advantage of the physical while I can and I know things wear out eventually.

Yes. I realize sex is not the same as riding a bike. But I am trying to understand this whole sex-after-50 thing.