Unlike most individuals, I picked up Plato's famous work The Republic willingly. With a two-and-a-half millennia pedigree and a reputation as the "cornerstone of western philosophy", I felt it was high time to broaden my mind and get a glimpse into the origins of European thought. Having now put it back down however, I can firmly say this: advocates for the diversification of the philosophical canon need look no further than The Republic to make a case that not all Western philosophy lives up to its hype. In fact, this particular this work falls very, very far from the hype - moreover it's hiding some nasty little secrets. Go in with any sort of contemporary sensibility, and reading The Republic will be like slowly realizing the handsome, Ivy-league doctor you've been set up on a date with is actually an unhinged, Trump-esque loon shuttled through society via patriarchal privilege.

Plato's purpose in The Republic is to define 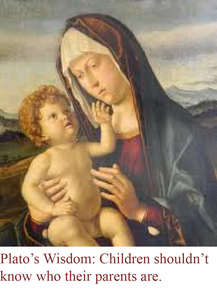 justice and construct an ideal political state. It's a noble enough premise, but very soon things fall apart. The first alarm bells to go off are when Plato unmasks a strange obsession with religion and censorship. He delineates a perfect society in which any "erroneous representation" that "is made of the nature of gods and heroes" is not to be permitted. This is bad luck for poets, mostly Homer, who has the gall "of telling a lie, and, what is more, a bad lie" in portraying the gods as emotional and capricious beings. "The first thing will be to establish a censorship of the writers of fiction... " Plato writes, with the intention of sparing children bad influences. But who is to have final say on what is and isn't an acceptable representation of religion is never clarified; mostly it just falls in line with what Plato does and doesn't personally agree with.

The signs grow more ominous as the censorship gets worse. All "lamentations and strains of sorrow", i.e. sad songs, are to be abolished, along with "flutes" and "many-stringed instruments". Many sorts of distinct rhythms and melodies get the axe next; only harmonies of "triumph" and "courage" and "temperance" are allowed to remain. In regards to nutrition, "Syracusan dinners" and "Sicilian cookery" are banished, though their crimes are left vaguely unspecified. This sort of thing goes on and on for sections - apparently the secret to political justice is extreme nitpicking.

Then a startling dystopian vision emerges with the description of how the ruling class, dubbed 'the guardians' are to live. In a prototyping of communism, these guardians are to cohabit with one another in a society where private property is abolished, and each person is assigned an occupation best according to his abilities. Plato takes it one step further than the average Marxist however by insisting that the guardians share not only their homes and belongings, but their wives and children as well. "I do not think," Plato writes, "that there can be any dispute about the very great utility of having wives and children in common." Children aren't allowed to know who their parents are, and vice versa, and everyone refers to one another through a vague, cultish amalgam of "mother/father/brother/sister" titles. 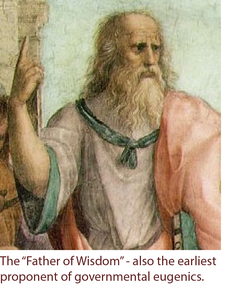 it - here comes the créme de la créme: "And God proclaims as a first principle to the rulers, that there is nothing which they should so anxiously guard... as [that] of the purity of the race." Okay... er, what? Read on, and you'll discover Plato writes, without the least degree of apprehension, that "the best of either sex should be united with the best as often, and the inferior with the inferior as seldom, as possible." This is just one of many passages highlighting the necessity for a governmentally-overseen breeding program, which acts like a sort of forced OKCupid pairing, making matches based on compatibility of age, physique, health and race. Of course, Plato insists that all such practices be "a secret which the rulers only know". Presumably this precaution is to keep the laypeople from revolting should they ever, you know, discover that eugenics is being practiced upon them.

You probably get the picture - and I've cut out half the nuttiness for brevity's sake. This brings us to Plato on the "dead-white-man" chopping block. It is not as though The Republic is without value - for every loony passage to grimace over, there is a corresponding one of passable philosophical or moral insight - but the troubling aspect is that The Republic is routinely quoted as a source of authority, not just in academia but in popular media articles such as this one, where the author cites Plato to justify his assault on the inherent stability of democracy, going as far as to say that our founding fathers disliked democracy because they had "read their Plato". I'm pretty sure they didn't; otherwise we all would be going around right now calling one another "brother/sister". Moreover, I wonder how that author would feel if he realized that the authority he is quoting also stands as history's first proponent of a eugenics program.

The context of The Republic seems also misconstrued, because with its quasi-mystical anecdotes, its imperatives from God, and its constrictive regulations on lifestyle, it more resembles biblical reading than philosophical work. The Republic ends not with a final lecture or dialectic, but with a lengthy story of the soul's journey into the afterlife and the "pilgrimage of a thousands years". When one is forced to read descriptions of hell and hear about the fate of "incurable sinners", one has to wonder whether its possibly time to reclassify The Republic from a philosophical work to a mystical one, or at least no longer insist on treating it as a work comparable to more modern philosophy.

If anything, the true value of The Republic lies in exposing the justifications for authoritarian regimes. Insights into the nature of "virtue", "justice", or "goodness" are arguably less substantial, but Plato's esteemed reputation for furnishing them is likely one of the strongest pieces of evidence for the impact of patriarchal bias over time. One may disagree, but at any rate it's best to use caution whenever we turn to our authorities for answers, because sometimes a reputation is just that. Read The Republic at your own risk.