MADRID, Jan 31 (Reuters) - Tens of thousands marched in Madrid on Saturday in the biggest show of support yet for Spanish anti-austerity party Podemos, whose policies and surging pre-election popularity have drawn comparisons with Greece's new Syriza rulers.

Crowds chanted "yes we can" or "tic tac tic tac" to suggest the clock was ticking for Spain's scandal-ridden political elite. Many waved Greek and Republican flags and banners reading "the change is now" or "Pablo president."

Podemos ("We Can") was formed just a year ago by university professor Pablo Iglesias, but produced a major shock by winning five seats in elections for the European Parliament in May.

Tapping into Spaniards' austerity fatigue and widespread anger at "la casta," as it calls the country's business and political elites, it is currently topping opinion polls in the run-up to local, regional and national elections this year. 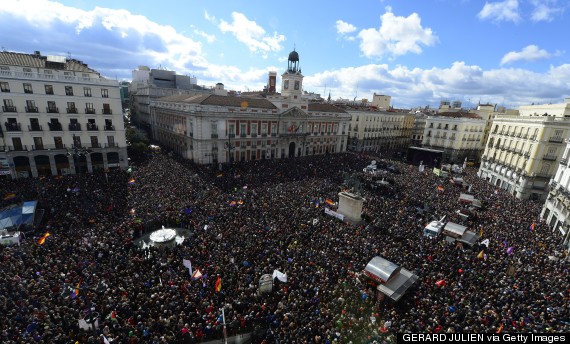 "People are fed up with the political class," said Antonia Fernandez, a 69-year-old pensioner from Madrid who had come to the demonstration with her family.

Fernandez, who lives with her husband on a 700-euro-($790)-a-month combined pension check, said she used to vote for the Socialist Party but had lost faith in it because of its handling of the economic crisis and its austerity policies.

"If we want to have a future, we need jobs," she said.

Spain is emerging from a seven-year economic slump as one of the euro zone's fastest growing countries. But the exit from recession has yet to ease the hardship for millions of households, in a country where nearly one in four of the workforce remains out of a job.

Addressing the crowd in the Puerta del Sol square in central Madrid, the 36-year-old, pony-tailed Iglesias said 2015 would be the "year of change" in Spain.

"The wind of change is starting to blow in Europe," he said in Greek, as he praised Greek leftist leader Alexis Tsipras' first decisions as prime minister.

Tsipras promised that five years of austerity, "humiliation and suffering" imposed by international creditors were over after his Syriza party romped to election victory on Jan. 25.

"Who said it was impossible? Greece today has a government of change. In Greece, more has been done in six days than in many years," Iglesias said. 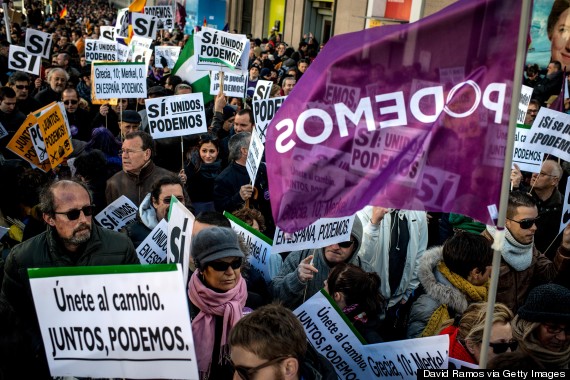 People hold up banners during a march of Podemos on Jan. 31, 2015 in Madrid, Spain. (David Ramos/Getty Images)

Like Syriza, Podemos hopes to seize power by overturning the two-party system in place since Spain embraced democracy in the 1970s, and by swallowing up other leftist parties such as the Socialists and former communists of Izquierda Unida.

Iglesias earlier this month increased pressure on the two parties by saying Spaniards would be faced with a binary choice at the next general election: "Podemos or the (ruling conservative) People's Party." He repeated this on Saturday.

Podemos, in a sign of its ambitions to capture disappointed socialist voters who had initially been scared by earlier more radical plans, had already toned down its economic program in November last year. With some success.

An official poll carried at the end of 2014 showed that one in four people who voted for the Socialists in the 2011 general election would today cast their ballot for Podemos. The rate would be one in two in the case of Izquierda Unida.

Jose Pablo Ferrandiz, a sociologist who heads the leading polling firm Metroscopia, said Podemos' strategy was to occupy the space of social democracy deserted by the socialists and to use it to win the general elections.

"Spain's electoral law means parties will have to secure alliances to govern. So if Podemos comes first on the left, the Socialists will have to decide who they back: the People's Party in a grand coalition or Podemos," he said. (Additional reporting by Inmaculada Sanz; Editing by Mark Heinrich)