If the International Pole Sports Federation has its way, pole dancing will be an Olympic sport by 2016.

But even some of the sport's top competitors doubt that will happen.

"My stance has always been that while I support the pole community's efforts to get pole into the Olympics, I don't think the general public is ready for the sport yet on such a mainstream/public scale," said U.S. National Pole Dancing Champion Natasha Wang.

Wang spoke to the Huffington Post in between teaching pole dancing classes on the island of St. Martin.

Pole dancing has long been associated with strip clubs, not athletic clubs, but a growing number of people have discovered it's a strenuous, sexy way to keep in shape.

The past decade has seen a growth of competitions where women -- and men -- perform routines for prizes, not tips.

On July 19 and 20, the IPSF even took their case to London with the World Pole Sport Championship where women and men competed for medals in both the singles and doubles pole dancing categories.

Natalia Tatarintseva of the Ukraine was the women's singles champion, while Eugeny Greshilov of Russia was the top medalist in the male category and Australians Ruth Mansfield and Tiffany Downes won the doubles competition.

Timothy Trautman, the Executive Vice President of the IPSF, said getting pole dancing officially recognized as an Olympic sport is the only way for people to realize that pole dancers are incredible athletes."

"They have such grace and elegance and they absolutely belong in the Olympics. But we do fight the stereotype that it's for strippers," Trautman told BuzzFeed.

The strippers aren't helping their cause.

Recently in New Zealand, local prostitutes are accused of destroying street signs by using them for pole dancing routines designed to attract customers.

Although pole dancing is often associated with strip bars, some claim the practice bears its roots in the Chinese circus. Wendy Traskos, the co-founder of the United States Pole Dancing Federation, insists pole dancing is more akin to jazz and ballet than bumping and grinding, and blames ignorance for the sport's negative image.

"The definition of stripping is taking something off, and these women are not doing that," Traskos told CBS News in 2011. "They're coming out in their outfits and you do have to have your skin exposed in order to stick to the pole."

"You're lifting your own body weight, you know," Huffman told KHOU-TV. "You're controlling all of your own muscles, and your body, to do those moves and the transitions smoothly, and safely."

The idea of turning pole dancing into a medal category gets high marks from ESPN blogger DJ Gallo, who said it is more of a "real sport" than pretty much anything already in the Olympics, like sailing, archery or table tennis, which he describes as "the thing you did with your neighbor friend Kyle in his basement in 7th grade."

Wang is hopeful that the IPSF championship helped the cause, but said it's the beginning a long, bumpy grind.

"I do think the World Pole Sports Championships in London was a great platform for showing the more gymnastics-based style that is in favor in lots of major pole competitions, and it's a great start...but that the public isn't ready to accept the sport yet now."

Wang, who never pole danced professionally until she became a champion, said that despite the massive growth of the sport it still has a stigma "because of the immediate association of a vertical pole and the strip club, regardless of the movement that is happening on and around the pole." 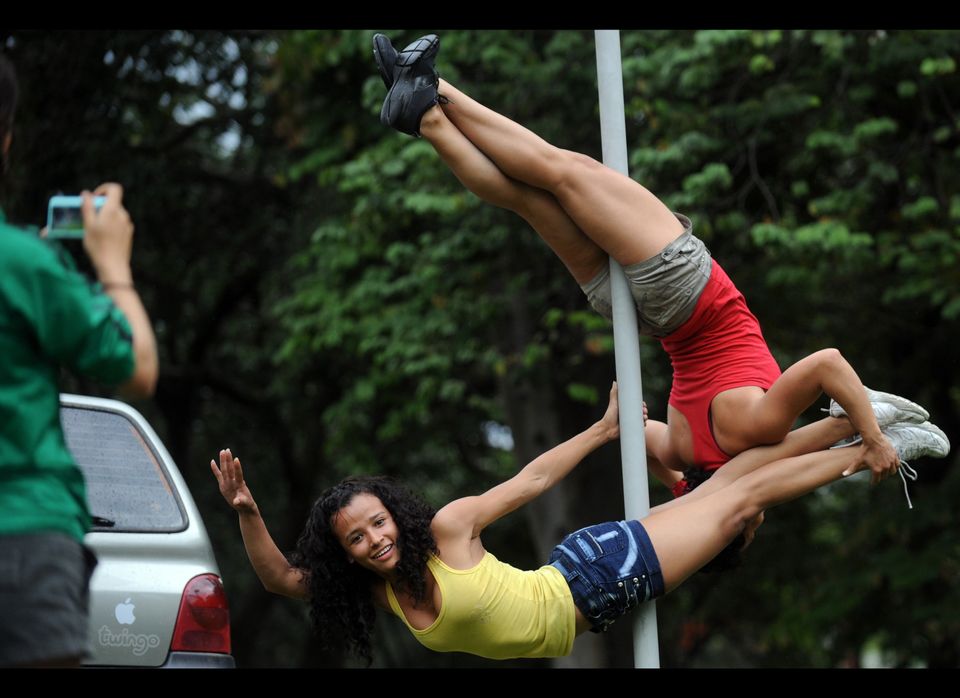 1 / 8
Colombian Women Go Pole Dancing In The Streets
Some of Colombia's most accomplished pole dancers want to take the sport out of the strip clubs and into the streets by swinging, twirling and climbing up every street sign and scaffold available.
Raul Arboleda/AFP/Getty Images