Police killed a gunman at a Tennessee movie theater who authorities said inflicted minor injuries on three members of the audience on Wednesday with a hatchet and pepper spray.

The Nashville Police Department told The Huffington Post that a call came in at 1:13 p.m. with reports of a person with a gun at Carmike 8 Cinemas in Antioch. Police later confirmed that the gun was in fact an airsoft pistol and not a real firearm.

Police said the suspect ― identified as Vincente David Montano, a 29-year-old white man ― was inside the theater during a screening of “Mad Max: Fury Road.” Metropolitan Nashville Police Chief Steve Anderson said that his department believes the shooter acted alone. Earlier in the day, police said the suspect was 51.

At an evening press conference, police said Montano was a troubled man with mental health issues and an arrest history. He had been committed four times for psychiatric treatment.

Montano had “significant psychiatric or psychological issues,” said Don Aaron of the Metro Nashville Police. Montano was arrested in 2004 for assault and resisting arrest, the AP reports. According to the Tennessean, he was also reported as a missing person on Aug. 3.

The suspect had at least one pellet gun and a hatchet, and two suspicious backpacks, including one that contained a fake bomb.

This is the ax carried by today's movie theater suspect pic.twitter.com/2rHVb8WnyM

This is the gun the movie theater suspect had. Although it looks like a real firearm, it is an airsoft pistol. pic.twitter.com/mixi9LGc9Y

Police entered the theater to find it "very thick with chemical spray" after the suspect unleashed pepper spray, according to police spokesman Don Aaron. The gunman exchanged fire with police inside the theater. Officers shot him when he emerged through a rear exit wearing a surgical mask and backpack on his belly.

Brian Haas with the Nashville Fire Department said that three people were injured. A 53-year-old woman and 17-year-old girl suffered pepper spray injuries. A 58-year-old man, who'd also been doused with pepper spray, had a "superficial wound" on his shoulder or arm from the attacker's hatchet.

"I'm sure the folks with the pepper spray exposure weren't too happy as well," Haas said.

There were eight people in the theater when the violence broke out, police said.

Hickory Hollow Cinemas not looking Good this afternoon. Looks like a war zone. Cops with raffles

"We heard shootings and seen a helicopter going above,” an employee at The Family Dollar on Bell Road near the Carmike Hickory 8 told The Huffington Post. The employee, who noted that his store is on the other end of the strip mall from the theater, said by 2 p.m. police had already cordoned off the store’s entire parking lot.

After the incident, police found two backpacks: one on the suspect and the other inside the theater. One backpack was detonated, and the bag on the suspect contained a hoax device.

“The backpack contained what we will refer to as a ‘hoax device,’” Aaron said. “Once it was disrupted, [police] examined the contets. In the long run, they posed no danger to the community or officers." 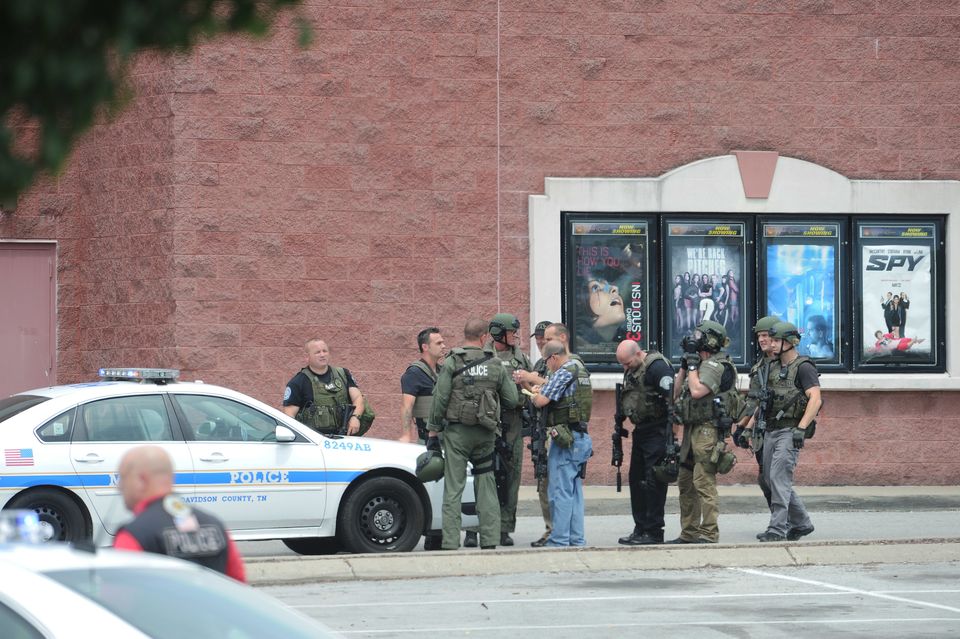