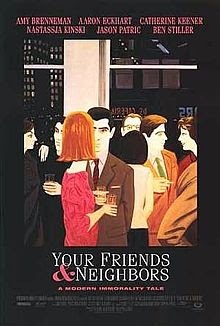 There is a scene in Neil LaBute's Your Friends & Neighbors (1998) where a character named Barry (Aaron Eckhart) desperately tries to give himself an erection while masturbating. One hears stories about the unsatisfactory porn in clinics afforded sperm donors. However, the scene in the LaBute movie is far more profound since it is so painfully solitary and actually represents a more primal and emblematic line between the life force and death wish. The light switch goes on or off and there's no controlling it. You can't will an erection. Sexual fantasy is obviously a part of sex and many people fantasize right during the sexual act with one degree of success or another. Without a doubt there are some lovers who would have to confess that the person in bed with them is almost in the way when it comes to enjoying what's basically a masturbatory experience. But LaBute is really bottom fishing in a particularly trenchant way in Your Friends & Neighbors. Barry's dilemma has the quality of classic tragedy. His marriage has failed and this is the sole camouflage in which pleasure is still able to manifest itself. Yet his character can find nothing that's stimulating enough to produce arousal. Yet is the other alternative any better? Let's say he were able to proceed with his project in which he's able to attain pleasure without the messiness of other people's needs and demands. Relationships are complex and there's something almost appealing about the self-sufficiency that the universe of masturbation provides. Let's say he's able to find utter delight in a world of fantasy and even sleeps well at night. Of all the cruelties LaBute has imagined in his predatory universe, this might be one of the most painful to watch since it might strike closest to home for many filmgoers. And what would the sequel be called, As You Like it?

This was originally posted to The Screaming Pope, Francis Levy's blog of rants and reactions to contemporary politics, art and culture