Readers who love romance and fantasy have a good chance of loving the novels of Jeffe Kennedy, who freely crosses genre lines in her epic fantasy romance series, The Twelve Kingdoms and The Uncharted Realms. These trilogies take place in the same world, a rich fantasy realm of shape-shifting, magic, and diverse cultures. The first novel of The Uncharted Realms series, The Pages of the Mind, is about a shy librarian who unexpectedly becomes a political linchpin and finds love on the way.

Jeffe builds bridges between the fantasy and romance communities, in person as well as in her writing, and offers insights for new and aspiring authors. We spoke about her new novel, the cover of her upcoming novel (revealed below!), and the joys and challenges of genre-bending in publishing. 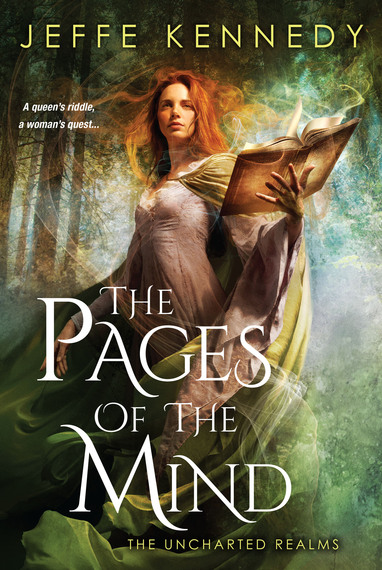 I'm interested in your journey to becoming a writer--you had a career unrelated to writing before this. What made you change gears, and how do you think that wealth of experience influences your present career as an author?

I actually changed gears a long time before I had any visibility as a writer, as is the case for so many of us. In my early twenties, I was getting my PhD in neurophysiology, studying auditory processing in bats. The work was fascinating, but I was profoundly unhappy, though not sure why. At the Neuroscience convention that year -- 60,000 people meeting for a week, who talked about nothing but their work, and none of whom seemed happy -- it all came to a head. I had a total meltdown, burst into tears in front of my adviser at a poster session and had to literally flee the building. After that, I sat myself down and faced that I didn't want to be a research scientist. I asked the question, if I took away all the ifs, ands, and buts -- what would be the perfect life? To my vast surprise, the answer was to be a writer. So I figured I'd better find a way to make that happen.

As for wealth of experience -- I'm so glad to have it! I'm good at study, research and discipline. When people ask how I research my books, the answer is frequently that I don't because it was information I knew already. I also took a day job with an environmental consulting firm for eighteen years while I built up my writing chops and career. That contributed, too, working in a corporate environment. I learned a lot of things about professionalism and dealing with people that I wouldn't have otherwise.

You resist being pigeonholed. On the one hand, you're established in the romance community, but also just as much at home in fantasy. I see you as someone who is very independent and blazes their own path. What draws you to writing this sort of hybrid work? Are there challenges to marketing work that's not easily categorized?

That struck me as funny at first, that you blame the resistance on me. In years past I might have argued that it's the genre communities that fence me out... but, I think you're right on many levels. I have resisted being groomed into the mainstream of any given genre or subgenre. I don't know that I'm drawn to writing hybrid work so much as that's how my stories come out. I often joke that I'm a fencesitter in many areas of my life -- I come out exactly even between left and right brain, between Type A and B, etc. Rarely am I ever in the mainstream of thought on anything. My mother would say I'm stubborn, but I am probably pretty strong-willed and independent, with little regard for rules. That's helped along the way. Catherine Asaro told me early on that being successful with the cross-genre sort of thing I write would be like wading through hip-deep snow. She was right! But I'm glad I didn't compromise. I feel like doing otherwise would have been apologizing for one or the other of my loves.

And, sure, there are challenges in marketing. I get a lot of fantasy reviewers saying there's too much romance -- "ubiquitous lovemaking" is one of my favorite sneers -- and romance reviewers complaining about the time spent on worldbuilding and politics. Interestingly, the readers don't seem to have the same issues. Also, in the time I've been writing, Fantasy Romance has really gained ground as a legit subgenre and thus is much easier to market than it used to be.

What was the inspiration for Pages of the Mind? On the one hand it's a departure from the original Twelve Kingdoms series, but it's also a continuation of the earlier storylines.

The heroine of Pages is a librarian, a secondary character from the original trilogy who serves as a kingmaker. When the trilogy ended, I had so many readers asking for Dafne's story that I knew she had to be next. But what does a kingmaker do when the kingmaking is done? I figured she'd have to go on a quest of her own - and that she'd make an excellent spy. I also wanted my heroine of order and quiet, of books and learning, to be confronted with something totally outside her experience. Thus a barbarian king she couldn't talk to. It seemed like a great concept at the time, but it was hell to write. So much gesturing!

Can you give us a preview of what's next in The Uncharted Realms series?

Ooh, yes! The next book is The Edge of the Blade and is Jepp's story. She's a scout and a warrior, who accompanied Dafne on her quest as a bodyguard. When Dafne is waylaid *cough* Jepp has to pick up her mission, which means going to a foreign empire as a spy. Jepp is a lusty, free-spirited woman, who's committed an indiscretion with the emissary of that empire. She has no filter, which makes her mission that much more difficult. I adore the cover to this one and can't wait to share it. Jepp looks totally badass.

Note: Jeffe's publisher gave us the go-ahead to reveal the cover of The Edge of the Blade, below: 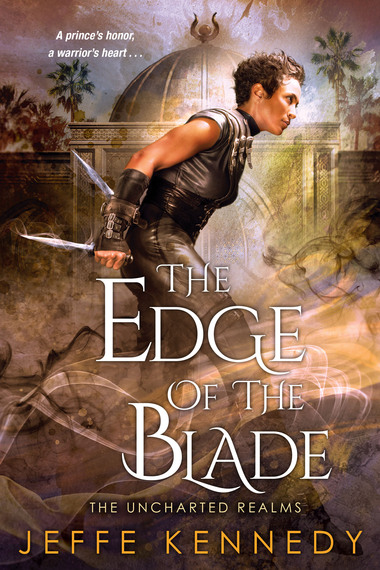 You're active in the writing community and generous with writers who are just getting their start. What is some of the top advice you'd give someone looking to break into publishing romance, or fantasy, or both?

Oh thank you - I'm also so pleased to be called "generous." It's the writers who were generous to me who made all the difference in the hip-deep snow-slogging. I'm assuming this writer I'm giving advice to has already handled the basics - read widely in the genres, developing a good writing habit and honed their writing skills. At that point I advise networking in the community. I'm a believer in going to conferences, but online networking is great, too. Do both. Remember that "networking" is another word for making friends. Be sincere with other people, regardless of your or their jealousy. Be generous! 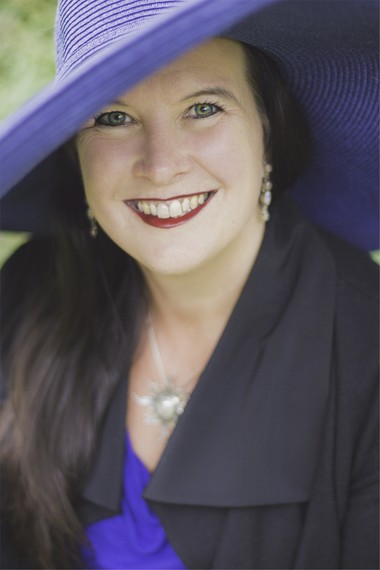 Jeffe Kennedy is an award-winning author whose works include non-fiction, poetry, short fiction, and novels. She has been a Ucross Foundation Fellow, received the Wyoming Arts Council Fellowship for Poetry, and was awarded a Frank Nelson Doubleday Memorial Award. Her essays have appeared in many publications, including Redbook.

Jeffe can be found online at her website: JeffeKennedy.com, every Sunday at the popular SFF Seven blog, on Facebook, on Goodreads and pretty much constantly on Twitter @jeffekennedy. She is represented by Connor Goldsmith of Fuse Literary.