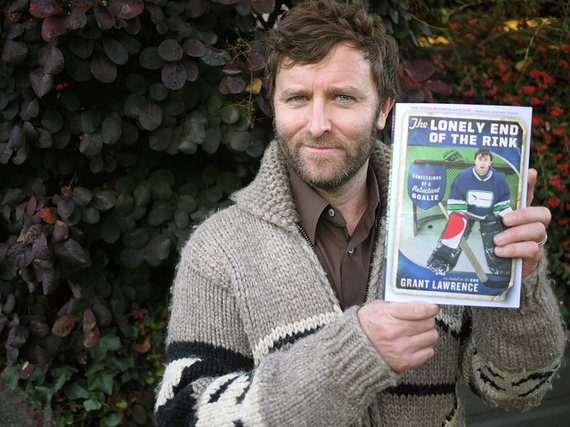 Grant Lawrence, CBC host, indie-rock alumnus, and the award-winning author of the bestselling book Adventures in Solitude, has delivered his second word baby to the world. He's named it, The Lonely End of the Rink: Confessionals of a Reluctant Goalie.

This book reads like a fast-paced adventure and you don't have to have an ounce of interest in hockey to love every sentence and period. In fact beyond the pads and pucks you'll find one of the most relatable and lovable Canadian tales of growing up a bullied nerd and West Coast Canuck.

Grant, this was the fastest book I've ever read in my life - it took me one day.

Well it took me three years to write it, I take it as a great compliment but I thought it would take you longer.

It was hard to put down. Tell us about The Lonely End of the Rink.

Well it's really about my conflicted relationship with sports, hockey specifically. I was a very small stunted kid with bad knees, huge glasses, and I was a target of bullying. What I remember very clearly, branded in my brain, was that my bully would very often be wearing a hockey jacket. So I would associate this type of pugilistic behavior, behavior that pushed me away from the centre of the social circles - with hockey. The book is about survival, taking life into your own hands and living life by your own terms.

If you were bullied, why would you have ever chosen to be goalie?

It's Stockholm Syndrome-esque, because when I was a little gimpy kid, if I was going to play with the jocks and the mean kids I had to play in goal. They were like: "Alright, if you play you play in goal." I think those kids took equal pleasure from scoring a goal OR being able to knock the glasses off my face with a shot. If you had told me then when I was with my glasses clattering across the asphalt that I would be writing a book about hockey 30 years later I basically would burst into tears.

My heart broke when I read you weren't even a nerds nerd - you were so low on the social totem pole you were even bullied by the nerds.

I was, the first couple years of high school were the worst years of my entire life. When I went to high school there were very defined cliques: the head bangers and then the jocks, and there was the preppy kids and the geeks, and I wasn't even in the geek group. It was similar to prison, if you are not with one of the groups and you're flying solo, you're easy pickings for whatever clique wants to come down on you. And unfortunately for me, all of them wanted to come down on me. The punks, the mods, even the geeks themselves.

Horrifying, if there are any gym teachers that are out there right now, know that, "shirts and skins" is one of the most traumatizing three words that a child could ever hear while growing up in a school situation. Usually a gym teacher will yell out "shirts and skins" in gym class, right as a child is hitting puberty in some way shape or form. [Saying] "Ok, you are in the most developmentally challenging time of your life. How about you take off your shirt? And show us that weird patch of hair growing on your naval."

I stopped playing basketball because of the coach's call for "shirts and skins" and I was like, "Hell no, I'm out of here." You also mentioned always being picked last for gym class - that's the worst for a kid.

Yeah me and Funnel Head Suzy Jenkins were picked last every time. She had to wear a plastic funnel like a dog that isn't supposed to lick itself. And I am not sure if it was a retainer or some sort of dental apparatus but it was either me or her chosen last and it was painful. I would stare at my feet, and eventually wait to hear my name said, in a sigh....Grant Lawrence. So gym class was a horror for me, but what was fun was recess and lunch where we would play ball hockey on our own terms. Even if my glasses were being shot off my face, it was then that we had determined our own rules and determined our own game. We just played the game and had fun. Instead of being instructed to take off our clothes in gym class.

So you said you found your tribe in music when you were in high school?

Eventually my tribe emerged in high school and it was the kids who were into alternative music. In highschool, I was lucky enough to have a mentor a couple of years older than me, none other than the legendary Nardwuar the Human Serviette. He was my class president and I eventually was able to emerge out of the fog of total geekdom in the first couple years of highschool through music. Music was my salvation, it wasn't sports, it wasn't science or anything like that - it was rock and roll. Nardwuar had a really cool band in highschool called The Evaporators and he said "you should form a band" and that's when I formed The Smugglers with my friends. We eventually became the cool kids - cause we had a cool band.

I'd bet you most of the popular bands we love today would have been nerds in high school.

I suppose so, very rarely does the cool kid also form a really cool band. I think it's called the Outliers Phenomenon, where it's those kids that are often on the fringes that are doing the most interesting things. The kids that are at the centre of the vortex are often having the best years of their lives and it's The Outliers that are setting themselves up; maybe as a survival tactic, they're learning how to survive, and that's one of the key themes to my book. If you can get through those tough years, survive, build up your social skills and a social shield, in a way, you are going to do a lot better later in life.

In both your books Adventures in Solitude as well as The Lonely End of the Rink, music is intertwined within, why is that?

I can't get away from the influence of music so I try to weave it through the story. I do it with pride. All the chapter titles are always song titles. The title of the book The Lonely End of the Rink is a Tragically Hip song. And my first book Adventures in Solitude, it's a New Pornographers song title so, it's really a tribute to mostly Canadian music, and how it has had a positive influence on me for years.

In your book you talk a lot about Buck the Bully, do you not worry that Buck is going to show up on your doorstep?

You know what... I do. I really do, and not so much to pound me or anything like that - but to say "How could you? That was 25 or 30 years ago." Believe me I paid very, very, very detailed attention to how I portrayed the several "bullies" in the book. I masked these people's identity as much as I possibly could. I don't want to throw them under the bus, who knows they are doing in life now, they are probably normal upstanding citizens that just got through elementary school and high school the way they had to. You know as jocks or as athletic kids. I got through it the way, I had to get through it. And the last thing I want to do is 25 years later is open up the wounds. So I did really try to mask these people.

Emotionally do you think you have moved beyond these times, or is this still hard for you?

No, the book was definitely cleansing and when I do talk about all those times I was bullied you know I always try to add in a element of humour. I'm no so precious that I'm begging for sympathy or anything. Like you know, I was the geek they were the jock that was the social order at least was it was in those years when I was going to school and hopefully its different now, hopefully teachers and parents pay a little bit more attention to what's going on with kids and I think they do.

That's what I love about your books - there is so much humor and nothing is ever too precious.

I hope people can relate to it, I hope people can see themselves in it whether a sport fan or not. Because I certainly wasn't for big chunks' of my life. And get a laugh out of it. I mean that's why I write. so people can hopefully enjoy and just get a kick out of it.