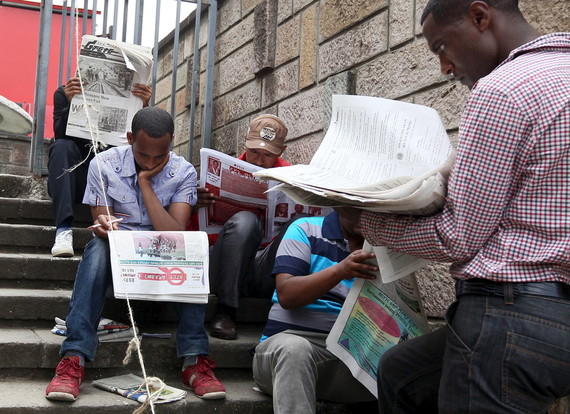 Glenda Daniels, University of the Witwatersrand

One key measure of a country's levels of freedom and democracy is how the government treats journalists and how free they are to do their work.

Sadly, based on a range of measures, including number of deaths, detention and government control of the media, the situation for journalists has worsened in the world.

Three organisations monitor press freedom across the world. They are the Committee to Protect Journalists, Freedom House and Reporters without Borders. All use similar indicators: how many journalists have been killed and jailed, how many media outlets are government owned, how many are independent, how many news outlets were sued for libel, and what kind of freedom of information and expression laws a country has.

In the past decade there has been no real change for most countries' press freedom scores. The same offenders in the Middle East, the East and Africa show up time and again, while some go up a few notches and others down.

Last year saw a marked increase in the number of deaths, with 72 journalists killed across the world compared with 24 in 2000. The deadliest country was war-torn Syria, with 14 deaths. Ten journalists have been killed globally so far this year.

According to the the Committee to Protect Journalists, there are 199 journalists in jail today compared with 81 in 2000. China is the worst offender, with 49.

Apart from China other countries notorious for jailing journalists are once more mainly in the Eastern bloc and in Africa. The main offenders include: Egypt (23), Eritrea (17), Turkey (14) and Ethiopia (10). Azerbaijan and Syria have seven journalists in jail each and the Gambia two.

In Africa, Namibia tops the press freedom charts and Egypt is the worst country for journalists. Significantly, notoriously poor performers Ethiopia and Gambia are respectively homes to the African Union (AU) and the African Commission of Human and People's Rights.

Their bad scores on media freedom, including detentions and constraints on the ability of journalists to do their jobs, call into question the AU's professed commitment to media freedom, and freedom of information and expression. This stands in contradiction to the continental body's vision against corruption and for democracy.

Although Article 25 of the Gambian constitution provides for freedom of expression and of the press, the government does not respect these rights.

Defamation and "dissemination of false information" are criminal offences, on par with sedition. The country's draconian Information and Communications Act prescribes a 15-year jail term and a fine of 3 million dalasi ($77,000) for anyone using the internet to spread "false news", make "derogatory statements", "incite dissatisfaction", or "instigate violence against the government or public officials".

Freedom House gives Gambia one of the lowest scores on press freedom in the world: 81 out of 100.

Reporters without Borders also scores the country really badly. Using freedom of expression and access to information measures, it places the country at number 151 out of 180 countries. Eritrea is last. In Africa Namibia scores the highest, at number 17, and South Africa is number 39.

Ethiopia has been ruled by the Ethiopian People's Revolutionary Democratic Front for the past 23 years. It has progressively shown itself to be anything but democratic.

A myriad of stumbling blocks have stood against media freedom and freedom of expression in Ethiopia. They include, among other things:

Making the world a safer place for journalists

The celebration of World Press Freedom Day provides an opportunity to take stock. This year the day coincides with two important milestones. It is the 250th anniversary of the world's first freedom of information law, which covered both modern Sweden and Finland. This law appears to have set the benchmark for all future efforts.

This year is also the 25th anniversary of the adoption of the Windhoek Declaration of press freedom principles adopted by the United Nations Educational, Scientific and Cultural Organisation (Unesco) in Namibia in 1991. It set out to make governments and citizens acknowledge that the free flow of information is a fundamental right.

World Press Freedom Day celebrates the fundamental principles of press freedom. It's a moment to evaluate press freedom around the world, to defend the media from attacks on their independence and to pay tribute to journalists who have lost their lives in the exercise of their profession.

Unesco's theme for this year's World Press Freedom Day is "Freedom of Information". Its conference, to be held in Helsinki, Finland, will wrestle with how best states can protect journalists. The focus includes how inter-organisational cooperation through United Nations agencies, governments, NGOs, media and academia can be strengthened to better protect journalists. It will also look at what media organisations and journalists can do better ensure their own safety.

The AU needs to take the Windhoek Declaration to heart and also commit to its own principles of democracy and transparency. These principles intrinsically link press freedom, freedom of expression and the safety of journalists. It's difficult to see how the continental body can ensure their observance while turning a blind eye to their continued violation in its key host countries.