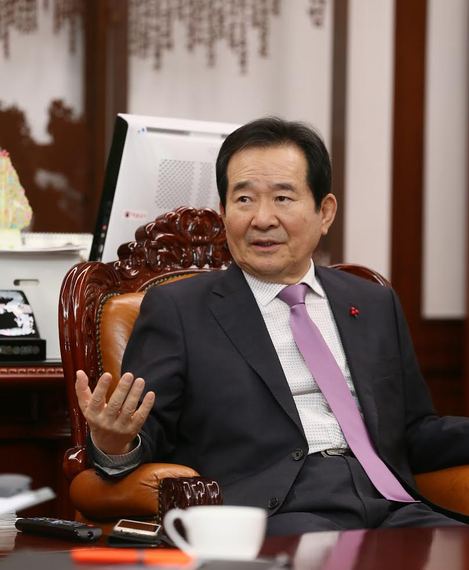 [Chung Sye-kyun, Speaker of the National Assembly of South Korea]

I had a chance to speak with Chung Sye-kyun, Speaker of the National Assembly, about his vision for Korean politics and his thoughts about what possible reforms may result from the current impeachment crisis. Speaker Chung spoke frankly about his hopes for meaningful and visionary constitutional reform and plans to address such knotty issues as the government-mandated history textbooks.

Emanuel Pastreich: What exactly is this consultative body made up by the ruling and opposition parties for the period of the impeachment proceedings?

Chung Sye-kyun: Under normal circumstances, the National Assembly would perform its role as legislative branch of government establishing laws. The central government, similarly, would play its administrative role. But we find ourselves in an emergency situation, one in which the president's administrative authority is legally suspended and the prime minister has taken up temporary authority. But in the middle of all this we are facing a broad range of challenges both at home and abroad.

It is in that sense that the opposition party has called for a "consultative body for the ruling and opposition parties" or "consultative body for government administration." Regardless of the name used, we need to consider the original function of the National Assembly: overseeing the actions of the executive branch and checking its actions. Simultaneously, the National Assembly also is charged with making legislation.

It was in the context of discussing this problem that suggestions for "political collaboration," to use a popular term, came up. There are four (updated from three) negotiating parties in the National Assembly now involved in this political collaboration and we intend to cooperate with those in the legislative and executive branches. It is in that sense that that the ruling and opposition parties came up with this concept of a "consultative body for national affairs." I think that such collaboration will allow us to move beyond the emergency situation of the present day and we want to make best use of the time we have. We need to work hard for such political collaboration so that the National Assembly, the entire government and the people of the Republic of Korea can respond to this emergency.

Emanuel Pastreich: What are the priorities for this consultative body for national affairs, and what role do you expect to play?

Chung Sye-kyun: There are many issues we must address and not so much time, but I think that the people's livelihood and the economy are the primary issues for citizens. The new most important issue is the response to new developments in foreign affairs and security, especially those related to North Korea's nuclear weapons program.

I hope that the members of the National Assembly, and all members of the political parties, will engage in a serious discussion about these two critical issues and that they will actively seek out ways to support the government so that reform and governance goes forward smoothly.

Chung Sye-kyun: Constitutional revision must first and foremost take place in accord with the understanding of our citizens. And only on that foundation that can we proceed smoothly with constitutional revision. We will also need each political party of the National Assembly to reach an agreement on the process. As it seems pretty much certain that elections will be held early, following the impeachment, it will be rather difficult to carry out any sort of constitutional revision before the election.

The term "third zone" refers to the formation of another faction by those who have left the major parties. These politicians could pursue a different approach to policy, coalescing into a larger political force. It is possible that they might even try to field a candidate for president. It does not appear, however, that they have come together as a viable force in Korean politics. These politicians would have tried increase their influence if there had not been any impeachment proceedings. But now with the impeachment proceedings (and early elections) they will not have much leisure to prepare for an election and I think it will be rather difficult to field a candidate.

It is an issue of the fundamental rights of citizens. Whether we are talking about environmental issues or sustainable development, I think that a broad range of issues should be addressed in the process of constitutional revision. It is a question of the power structure. We need to do more than address institutional architecture. We must respond to the many changes and developments that have taken place in Korea over the last thirty years. Those developments should be reflected in the revision of the constitution.

Emanuel Pastreich: How do you view the impeachment proceedings, especially as related to the impending early presidential election or the revision of the constitution?

At present the members of the National Assembly need to systematically, in a transparent manner, discuss the basis for constitutional reform. It appears that many who participated in the demonstrations watching very closely how the impeachment hearings progress now that the case has moved to the Constitutional Court. They are ready, as committed citizens, to reconsider their positions on Korean politics in accordance with developments.

We must not lose sight, however, of the current issues critical to Korea. We must effectively resolve pressing issues such as the bird flu outbreak (AI), problems in the economy, and challenges for security and diplomacy. We can at the same time and proceed with the political process of resolving the crisis in a democratic, peaceful, reasonable and orderly way.

Emanuel Pastreich: But there are some people who are worried that not everybody has the vision that you have, that there are politicians who are more concerned about the next election than any long-term reforms. So how would you make sure that we are focused on the big question of the Constitution and of the future of Korea, rather than short-term benefits?

Chung Sye-kyun: It is quite natural for politicians to want to win elections and that is how things should be. We also need to confront current challenges and to think about the future of Korea. I must run for office and I must also fulfill my duties as the speaker of the National Assembly. The same goes for others.

Those who want to run in the presidential election must try hard to win the support of the people. But we have already seen the degree of commitment of our citizens to good government in the recent protests. They clearly feel a responsibility to carry out their role as citizens. It is for this reason that I am optimistic that no problems would arise.

Those who wish to be candidates for president ought to compete in a fair manner and thereby be scrutinized by the people. In this process, they should offer their visions and compete openly with each other to offer solutions. I hope that a good leader will be chosen in the end.

Additionally, I hope that presidential candidates will offer a concrete vision to the people, rather than employing a negative campaign. I understand that there is little time left in the process. Nevertheless, I hope that the candidates would make meaningful pledges for good government and will receive the support of citizens in return, thereby carrying out constructive campaigns.

Emanuel Pastreich: A sample of the new government-mandated history textbook was released recently and set off protests calling for its recall. How should be address this problem, especially in light of the process by which this textbook was produced?

Chung Sye-kyun: I have always strongly opposed the idea of government-mandated textbooks. This is not because of ideological or political bias, but rather because I feel we must employ a balanced and objective manner of considering history as we undertake the awesome task of educating of future generations. If we look at the issue in terms of our mission to the future, I believe, we must admit that Korea has developed sufficiently to no longer require government-mandated history textbooks.