For reasons I'll get to in a moment, I was really struck by the title of this excellent, important new paper by my CBPP colleague Kathleen Romig: Increasing Payroll Taxes Would Strengthen Social Security.

It is well understood that Social Security's financing needs shoring up; we've been drawing down the trust funds to meet current obligations and by 2034 the funds will be exhausted. That's often mistakenly taken to mean that Social Security will no longer pay out benefits, which of course is wrong: 86 percent of its income comes from payroll taxes, which will continue to support the program, allowing it to pay about three-fourths of scheduled benefits in 2035 and beyond. To be clear, that is a totally unacceptable outcome, and one that could be--must be--avoided using Romig's roadmap. She is absolutely correct when she describes, contrary to the hysteria I often hear on this issue, that Social Security's shortfall is "significant, though manageable."

In fact, the shortfall amounts to 1 percent of GDP over the next 75 years. So how can we close that gap? Much of the solution will have to involve increasing the payroll tax revenue that, as noted, is the mainstay of the program's funding.

Romig's key argument is that such an increase is justified by recent trends: "Social Security's tax base has eroded since the last time policymakers addressed solvency in 1983, largely due to increased inequality and the rising cost of non-taxed fringe benefits, such as health insurance."

But Americans wouldn't stand for reversing that erosion through paying more into the program, right? In fact, Romig notes that "...the majority of Americans oppose cuts to Social Security and support strengthening the program by contributing more in taxes." Other than Medicare, there may be no other government program that has this kind of support. So we should tap it.

To do so, she suggests three revenue-enhancing changes:

The two figures below show the extent to which the compensation base of the program has eroded, due in part to rising earnings inequality pushing a larger share of earnings above the payroll cap. Note first how that total amount of compensation has drifted about the taxable earnings base. The base for the payroll tax used to be three-quarters of total compensation; now it's about two-thirds. 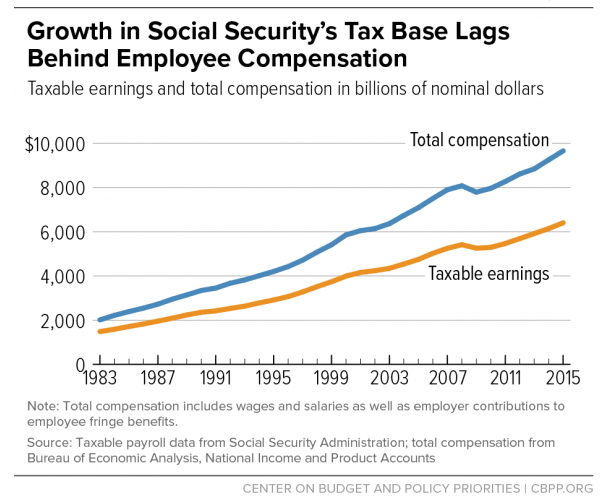 There are two main reasons for that: higher inequality and the fact that an increasing share of compensation goes to health care and other fringes that are outside the payroll tax base.

The earnings inequality problem is clear in the next figure. The last time we addressed the shortfall, the payroll tax covered 90 percent of earnings. Now it covers only 82 percent. 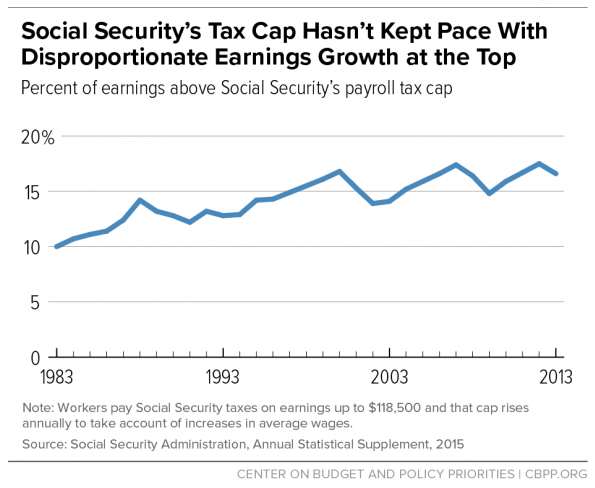 It is often said that there are three legs to the retirement-security stool: savings, pensions, and Social Security. In benighted DC discussions, Social Security is often derided as the shakiest leg. In fact, it's the firmest, as decades of wage stagnation and risk shifting (both the shift from defined-benefit to defined-contribution pensions and the simple shedding of pension plans) have undermined the other two legs.

Romig's big three ideas are great ways to make the strongest leg of the stool even stronger, through broadening the base to correct the factors responsible for its erosion. Yes, that's a tax increase, which is why I was struck by the boldness of her title. We are in an era where even the Democratic candidate for president will not propose tax increases on any but the top 5 percent; where we are somehow supposed to fund our transportation infrastructure on a gas tax that's been frozen in nominal terms since 1993.

It is only in magical lands that we can get what we want and need without paying for it. In the real world, this is the way forward, and kudos to Romig (and CBPP) for saying so.