By Michelle Schuman for the Orbitz Travel Blog

Few places are as harsh and as romanticized as the desert's dangerously hot, wide-open terrain. But in this case, all the Arabian Nights fantasies aren't nearly as outlandish as the truth... 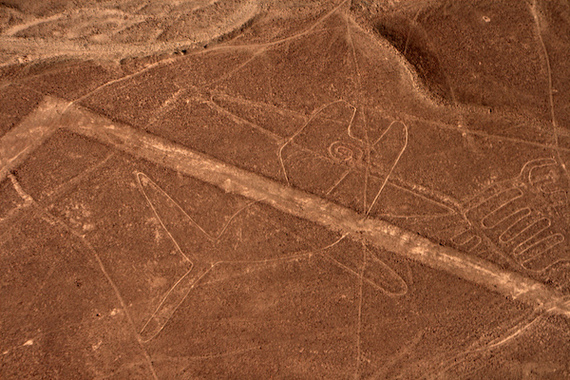 It doesn't get much more mysterious than this
We're not saying that you should skip Machu Picchu or the Maras Salt Ponds (or any of Peru's other countless wonders), but a flight over the Nazca Lines is a whole new kind of legendary. These alien-looking patterns are over a millennium old, painstakingly carved by the Nazca people. No one really knows what they mean, but with some drawings clocking in at more than 200 meters across, it's safe to say they were pretty important. It's also safe to say that the only way to really appreciate the Nazca Lines is with an aerial view. 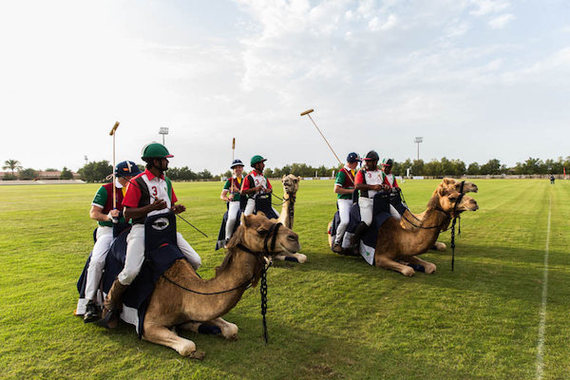 Some games are best played on camels
Polo is such a regal game--until your camel sits down, wanders off the field or stops responding entirely. But this only adds to the thrill, making for an often hilarious match where the competitive spirit plays second fiddle to the unwieldy experience itself. Dubai's Gulf Ventures is always down for a game, providing the equipment and camels, but not the iron will necessary to get a camel to obey a direct order.

Related: This Caribbean island's best feature is a drive-in volcano 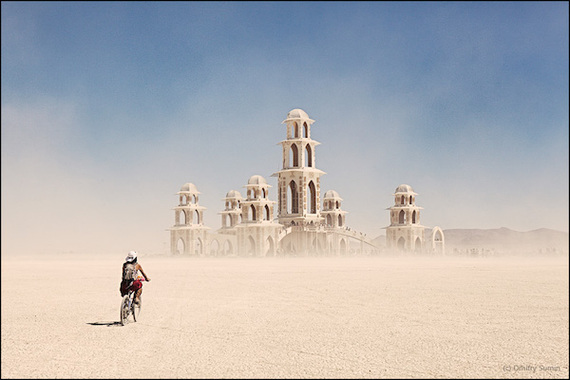 One burning effigy launched a thousand festivals
It's likely you've heard of this once-underground event by now. Every year, free-spirited folks from around the world gather in Nevada's Black Rock Desert for Burning Man, a week of experimental art, self-expression, music and the main event: The ritual burning of their namesake effigy. And even though the temporary Black Rock City is set up before the festival every year, the liberal-minded attendees do their best to leave no trace of their visit--a tricky feat, since you have to bring everything you'll need to survive with you (it is in the middle of the desert, after all). Despite the hassle, it's spawned countless copycats all over the world. 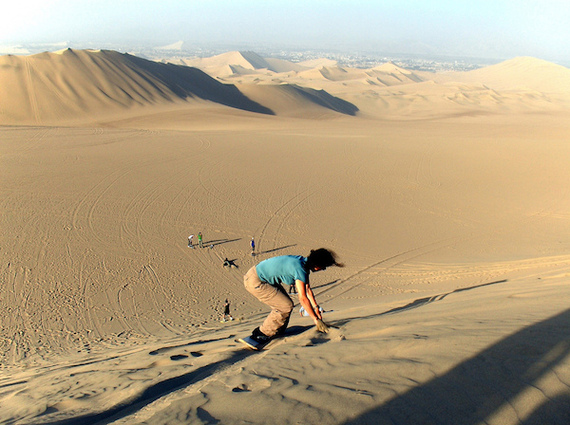 Sandboarding
This sport is somehow both the opposite and the same as snowboarding. Conquer Peru's Usaka Desert via sandboard as you carve gracefully down those rolling dunes. Just make sure you wear long sleeves and bring a lot of water--climbing up those dunes beneath a scorching sun takes a lot of work. 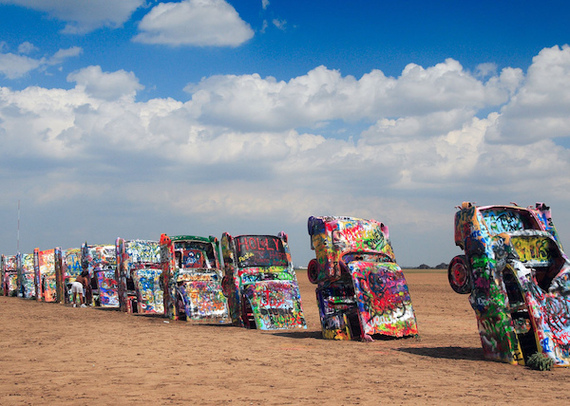 Some cars never make it off Route 66
Don't let the name fool you: The residents of this Amarillo, Texas art installation and Route 66 attraction won't be roaming anywhere. It's comprised of 10 Cadillacs buried nose-first in the ground and covered in colorful graffiti, making for some great photos. Cadillac Ranch visible from the iconic Route 66, so make sure you stop if you catch sight of a neon-green tail fin in the distance.

Related: Trust us, you want to do Barbados like a local. Here's how. 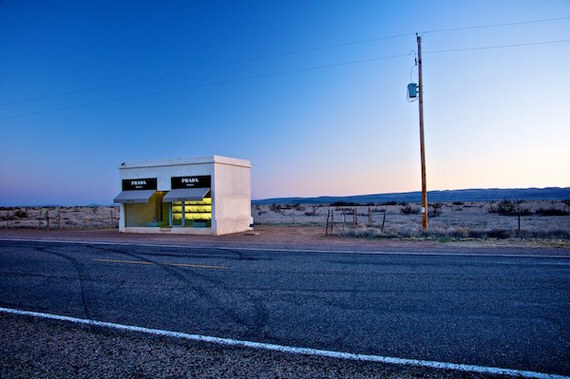 Prada isn't just a luxury brand--it's social commentary, too
Picture this: You're cruising along the unbelievably empty Route 90 in the West Texan desert when you stumble upon the impossible--a Prada store. Is it a mirage? A joke? Nope, it's a permanent art installation filled with handbags and shoes, brought to you by Berlin-based artists Elmgreen and Dragset. You won't be able to go inside Prada Marfa, but it's worth a selfie or two (or impromptu desert fashion shoot). 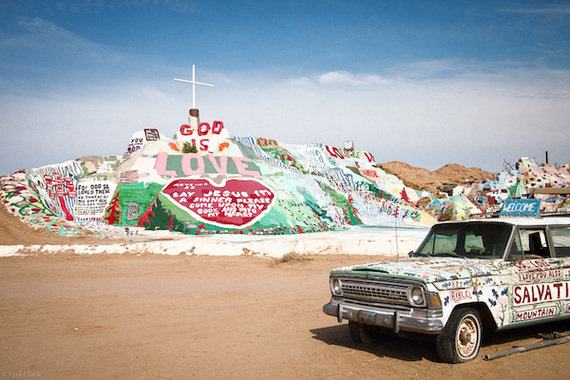 You can find salvation on the side of a mountain
This Highway 365 gem is both purely Californian and a living relic of creator Leonard Knight's vision of a simple religion. The multicolored Salvation Mountain is crowned with a simple cross and his singular message: God is love. After your visit, head towards the nearby squatter-community and former WWII Marine facility Slab City, or the ruins of Bombay Beach. 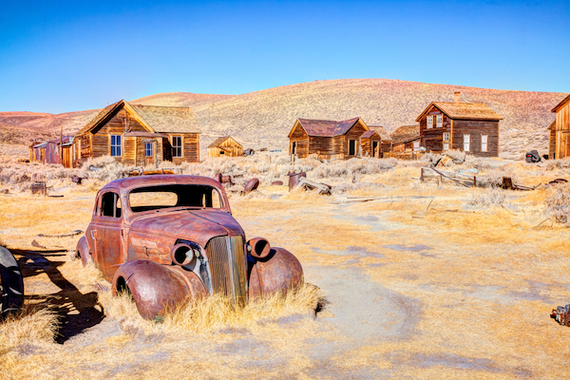 The Wild West has left an eerie mark on America
What happens when you mix a healthy vein of gold with brothels, countless saloons, gambling halls and opium dens? Well, you get Bodie. This former gold-mining town was once big enough to boast its own Chinatown district--as well as more shootouts, barroom brawls and stagecoach holdups than you could shake a quaking outlaw at. Then, an earthquake buried the gold and everyone high-tailed it out of town. Today, you can tour some 100-plus still-standing buildings to the tune of $2 per visitor, but keep in mind that there are no mannequin outlaws, period actors or staged shootouts here. This truly deserted must-see sits along California's Highway 365.

Related: How many of these remote destinations have you visited? 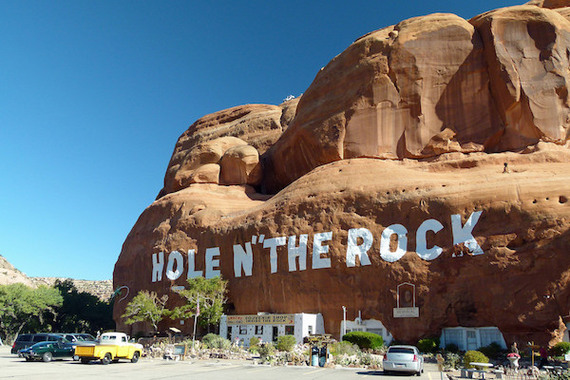 Sometimes a rock isn't just a rock
The goofily-named Hole in the Rock is, surprisingly, a 5,000-square-foot luxury home carved into rock by Albert L. Christensen. After exploring the home's fireplace and 65-foot chimney, rock bathtub and original furnishings--including a massive doll collection--head outside to marvel at the detailed face of Franklin D. Roosevelt carved into the home's exterior, a memorial to the late, great Prez. As if that wasn't enough, there's also an art collection, a trading post with locally made Native American goods, a general store with ice cream, and an exotic zoo filled with ostriches, camel and zebra.