Two members of feminist punk group Pussy Riot were attacked by a group of men in a McDonalds on Thursday, the Moscow Times reported. A video purporting to show the attack was posted to YouTube.

Maria Alyokhina and Nadezhda Tolokonnikova, who were released from prison shortly before the 2014 Olympic games, were visiting the city of Nizhny Novgorod to meet with inmates at a local women's prison. They had posted their plans on social media before the visit.

The two women were eating breakfast when five young men surrounded their table and threw "metal objects" at them, causing Alyokhina a "cut to her forehead," their lawyer told Interfax. She also reportedly suffered a concussion.

The men shouted "Go to America!" and held up a sign saying "Dirty whores, get out of the city," according to Reuters and Agence France-Presse.

Amnesty International called for Russian authorities to launch an "independent and impartial" investigation into the attack. “By all accounts, this violent attack appears to have been premeditated by an organized group. The unidentified assailants chanted slogans, held aloft a banner and filmed the entire incident,” the director of Amnesty International's Moscow office, Sergei Nikitin, said in a statement.

Local police are investigating the incident, according to Interfax.

Alyokhina and Tolokonnikova were imprisoned on hooliganism charges in August 2012 for performing a song critical of Putin in a Moscow church.

After their release, they resolved to focus their attention on improving conditions in Russia's prisons.

Though six other members of Pussy Riot wrote on their blog in February that Alyokhina and Tolokonnikova were no longer members of the group, the two women have continued to perform under the name Pussy Riot.

In February, Alyokhina and Tolokonnikova were part of a group of Pussy Riot members who were beaten by Cossack militia during an impromptu performance at the Sochi Olympics.

UPDATE: 10:30 a.m. -- More details about the attack and a statement from Amnesty International have been added. 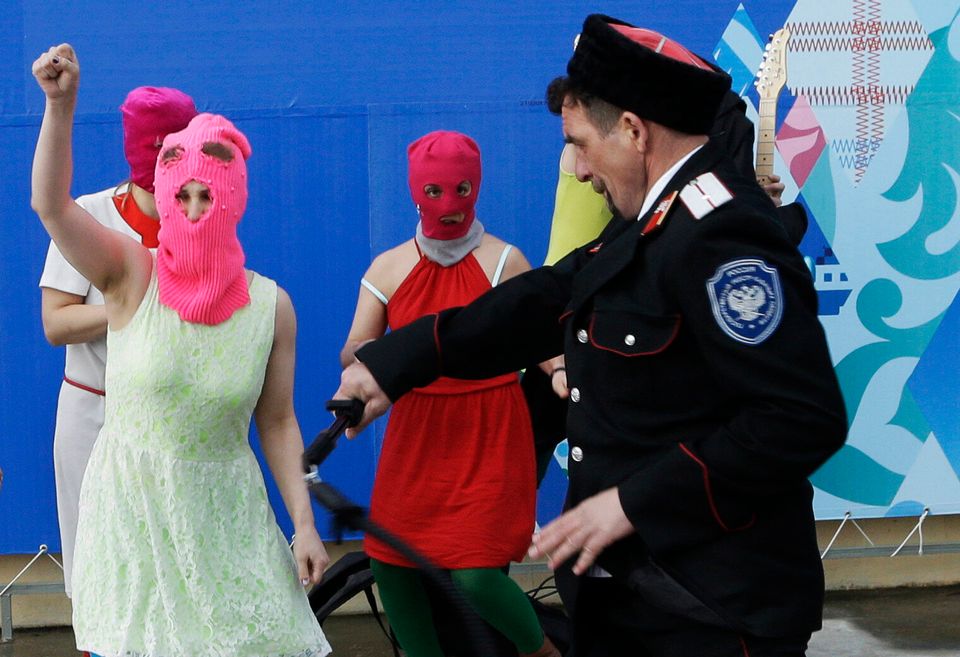 1 / 8
Members of the punk group Pussy Riot, including Nadezhda Tolokonnikova in the blue balaclava and Maria Alekhina in the pink balaclava, are attacked by Cossack militia in Sochi, Russia, on Wednesday, Feb. 19, 2014. (AP Photo/Morry Gash)
AP