My seven-year old prepared for weeks, practicing his lines, singing along to the DVD and fretting over every detail of his costume. His first grade rendition of the Robert Lopshire book Put Me In The Zoo promised a wholesome bite of childhood a parent could savor for years to come. The play was based on the picture book about a leopard who wants to live in a zoo, but the zoo doesn't want him. He goes about convincing a little boy and a girl that with "all the things he can do" the zoo is where he belongs. Eventually, the children convince the leopard that he will be a perfect fit in a circus. It works out nicely.

Eden's excitement had peaked the morning of the performance when he reminded me, "Mommy, remember there's a play party in a room right after?" Whoops. Since I was no longer invited to my older child's school parties, I hadn't remembered specifically. But my morning schedule was clear.

Without a pause I reassured, "Of course I remembered! Do you want me to bring something from the house?" By "something" I meant any particular food. We bring food everywhere because Eden is allergic to a long list of them (sigh: dairy, soy, nuts, peanuts, raw garlic, legumes.)

"Nah," he answered. "Usually at the parent they just have muffins and bagels."

His nonchalance wasn't surprising since Eden has had deadly allergies for as long as he can remember. He is used to eating "differently" and he can pretty well predict when an occasion might be rife with tantalizing fare as opposed to his "go to" alternatives like cut fruit or an unseeded, unadorned, unbuttered bagel. Besides his teacher kept a stash of Oreos for the infinity of half and whole birthday parties they celebrated there. I had sufficient back up.

The play? Of course it was a shimmering performance. Eden sang along to the closing song "True Colors" with what looked like a tenor of joy. Still tingling with the warm excitement of son's bright future in the performing arts, I tromped up five flights holding his hand and opened the classroom door to IT.

IT was a cake. But no, no, it was more than just a cake, it was a cake sculpture, a high ranking contestant in a Food Network pastry competition, a mountain of chiseled frosting (literally a mountain) covered in lions and tigers and bears. Oh my! There were edible palm trees and jungle vegetation at the base and each tier toppled with spun sugar and butter cream. The mother ship had landed. And like a demonically sweet centrifuge, the cake had drawn rings and children and parents who fawned and remarked. 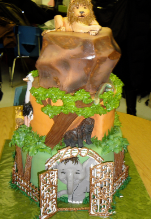 What was such cake doing there without my knowledge? Clearly, I had miscalculated and failed to pre-communicate with the class mother who ordered the cake. So, first, I had a self-flagellating, stomach-churning bout of guilt. But that wave of fun was brief as I grasped that Eden could be feeling worse. I bent down, asked him if he wanted to check out the rest of the refreshments (he did) and filled his plate with (you guessed it) a bagel and two slices of cantaloupe.

Back at our table (conveniently located next to the cake) I sat down next to Eden, knees up to my chin, and listened quietly while he whispered (as if you could hear anything in the ongoing cake-cutting, ogling, plate thrusting mayhem) that he just wondered, "What it tasted like ... You know what I mean?"

To me, his gray-green eyes looked like endless pools of sad. Maybe I was wrong. Maybe I wasn't.

I tried to answer Eden's desire and it came out like this: "Know what? Bet it's pretty bad actually." To which I got an accommodating smirk.

Encouraged, I went on, "If fact, I bet it's that kind of cake that has grainy, yucky icing, you know the kind where there are all those weird bumps? And the batter part is probably all dried out just so the cake can stay up so high." To which I got a giggle.

And that's when I began going hog-wild. Snout flying in the air, I gambled, "I bet that cake would be so, so bad that it would make us burp so loud and we would want to throw it down the toilet and flush it!"

Dear God I was unstoppable. I had just literally used toilet talk to distract my son. But his smile had returned. He was chuckling. I went on: I used the G word (gross) I clowned out "Ewww's" and I bent to "I-Carly" level witticism, "Helloo people. It's a cake uhhh not world peace or the Olympic gold, you know?!" I said awful things about that cake. I was a terrible, horrible, no good, very bad role model of civility.

I know. Put me in the zoo. That Crazy Allergy Mom belongs in the circus no less -- but as I sat in the bull's eye of that cake, my sorrow and my son's burden, taking aim with those words was all I could do.