The recent drop in Ebola cases in Liberia is welcome. Many factors are contributing to this decline, including the adoption of safe burials and the emphasis on quickly getting patients into Ebola treatment units or community care centers and community initiatives to isolate and care for patients and track contacts.

One promising development has been Liberia's creation of RITE teams (short for Rapid Isolation and Treatment of Ebola). These teams are slowing the epidemic, and CDC is working closely with governments and partners in Guinea and Sierra Leone to adopt similar rapid response strategies. 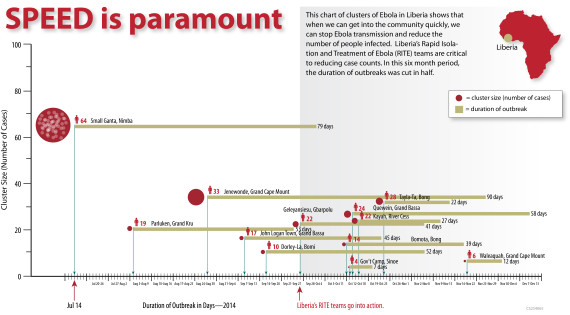 In October, Liberia's Ministry of Health and Social Welfare received reports of a cluster of deaths in a remote village of 800 people. To get to the village, CDC staff along with others in the RITE team took a four-wheel-drive vehicle down rough African back roads, then canoed across a river, finally walking almost four hours to reach their destination. When they arrived, people in the village denied there had been any Ebola deaths. The team left after one night.

But three days later, seven people left the village to seek medical care. All tested positive for Ebola. Again a team was dispatched to the village, this time by helicopter. There they found three people who were probably infected and isolated them from their families.

The team then spent three days in the village providing supportive care for the probable cases. They visited every home in the village, identified possible Ebola patients, and followed up with their contacts. The Samaritan's Purse organization arrived to set up isolation tents and educate the villagers on how to provide safe "no-touch" care. With the immediate crisis contained, RITE team left, walking the four hours back to the river, crossing by canoe, and driving back to Monrovia.

But the RITE teams' work was not over. A third team came in by helicopter to pick up blood samples, which they then had to walk out.

All of this intensive effort paid off. This village of 800 ended up with 22 cases. The outcome there could have been so much worse, with many times this number of cases.

The RITE teams were jointly created by the Liberian Ministry of Health and Social Welfare, CDC, WHO, and UNICEF with the goal of moving quickly into communities where active Ebola transmission is suspected. Their key job is to rapidly identify and isolate those suspected of having Ebola and their contacts, and to collect and arrange transport of specimens for laboratory confirmation. While in the community, they meet with leaders to provide education and support and promote safe burials. Since creation of these teams, they have investigated more than 15 hotspots, and curtailed outbreaks that could otherwise have resulted in hundreds of cases, stopping spread after one or two generations of spread instead of many -- meaning that there were clusters of five to 25 cases instead of outbreaks of many dozens or hundreds of cases.

Teams come in with essential provisions such as protective gear, medications, and sanitation supplies such as chlorine. They also bring food and water for Ebola patients and contacts.

The word "rapid" in RITE is especially crucial. Speed is everything in this response. When counties identify an area where there may be active Ebola transmission, a team arrives within 24 to 48 hours. Because of the lack of passable roads, teams may have to travel by helicopter or canoe, or hike in, doing whatever it takes to get there as quickly as possible to start their work. Last week there was a suspected case in a remote area of Liberia and the RITE team was set to go in two hours -- but rapid testing ruled the case out, and the team could stand down.

Rapid detection and rapid response is the essence of effective public health action to stop infectious disease. Expanding this activity in Sierra Leone and Guinea will be essential to stopping Ebola, and will also establish core emergency public health response systems that can be used to stop deadly outbreaks, from Ebola or other pathogens, protecting West Africa and the world.