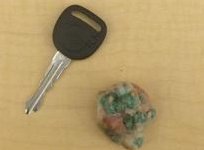 One of the poisoned meatballs found by Boulder dog-owners

At least three dogs in Colorado had to be rushed to a veterinarian after ingesting what authorities say were meatballs laced with rat poison.

The Boulder County Sheriff's Office was first notified April 14 of the poisonous meat littering a park that dogs frequent, the Daily Camera reported.

Uli Bromme, who owns a six-month-old golden retriever named Amos, told the publication that her dog ate one meatball before Bromme was able to snatch up another.

"Everyone in this neighborhood is shocked," Bromme told The Daily Camera.

At the vet, Amos was given an injection to induce vomiting. The pup is now stable after eating what Bromme said looked like hamburger meat laced with blue-green pellets.

Doctors confirmed the meatballs were laced with rat poison.

On Sunday, two more meatballs laced with the deadly substance were found near the same park. So far, 10 meatballs thought to be poisonous have been found.

Although authorities currently have no leads in the case, the incident is extremely similar to a case that happened in San Francisco, Calif. In February, when more than 30 rat poison-laced meatballs were discovered tucked away in bushes and shrubs around the city. 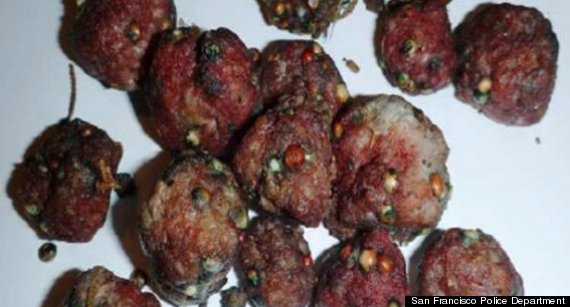 In July 2013, hundreds of tainted meatballs were found in San Francisco, according to CBS San Francisco. During that incident, at least one dog -- a dachshund named Oskar -- died.

The Boulder County Sheriff's Office could not be immediately reached for comment regarding any possible connection between the incidents in San Francisco and the most recent one in Boulder.

Sheriff's officials told The Daily Camera that a $4,500 reward is being offered to anyone with information leading to the arrest and conviction of the person suspected of leaving the poisoned meat.