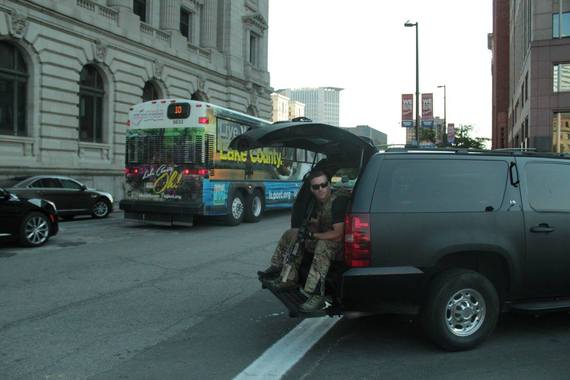 Public Square, Cleveland:Police in tactical gear circle around downtown Cleveland. Their set up makes them hard to actually identify, at first we mistook them for miltia members. (Noah Neslon/Youth Radio)

Things have been relatively calm here in Cleveland the past few days, I even appeared on San Francisco's KALW Tuesday morning to talk about how the protests so far have been small scale and serene. Well, as serene as an event featuring people yelling into megaphones can be. Today, as I was leaving Quicken Loans Arena and the convention proper, the word on twitter was that there was a bit of a commotion going on in the downtown's Public Square, where the day before had seen almost as many cops as protestors. Upon hearing that noted agitator Alex Jones was involved, my producer and I headed down, and the scene before us was, well, unexpected.

The first thing we saw, or the first thing we thought we saw, were the familiar faces of hate otherwise known as the Westboro Baptist Church. However, in what ended up being a good set up for the next hour, we soon realized that they were a parody group of the church, with their signs referencing Mermen, bangs, and other such issues. Upon taking the Square in, it quickly became apparent to me what was going on was not a protest, but a mixture of a carnival and tumblr coming to life. There was a supreme leftist yelling about the ills of capitalism to a man very proudly open carrying an assault rifle, while his friend asked all those around, including me, if "y'all ever see one of these before?"

There were clowns, actual clowns, performing as Trump and members of his family. A few hyper evangelicals hoisting their signs that have the same language they always do, and a lot, oh boy a lot, of cops on bikes. Nothing was really happening while we were there however, and we were almost ready to leave, when we saw a whole host of cops on bikes, and cameras crews following them, as they moved down the block, away from the Square and downtown proper. So we, the studious members of the press, followed them to see what was going on.

On the way we quickly passed by a flummoxed Chair of the Democratic Party, Debbie Wasserman Shultz. (My producer proclaiming "It's Debbie!" loudly probably didn't help.)

Eventually we decided to turn around, as there really was no fire to chase, so we headed back to the Public Square and were then surprised to find that area was now almost entirely filled with police. They were about 120 officers standing in the middle of the Square as a group, as if they had launched a silent protest of their own, so we began to head back in the direction of our de facto home base while we're here in Cleveland, only to run into what appeared to be the original group of protesters. The police had stopped them, and the first real tinges of anxiety were in the air, as everything crashed to a halt. However, as we were debating bringing out our cameras to cover what was unfolding in front of us, the police started letting people continue down the road, slowly at first, and then eventually letting everyone through. The group itself erupted in a few soft, unintelligible chants, but for the most part just walked the streets as well. By the time we got back to write our daily stories, we had quickly come to the conclusion was that this whole thing was, well, lame.

Though the overall atmosphere has been calm so far in Cleveland, which might be because why there are over five thousand cops gathered from all over the country, I would estimate there are fewer than five hundred protestors here. In the end, the expectations from the media and our own painfully recent history appear to have created a paper tiger, where worries of violence in the streets have created an environment eager to find it. But really, so far this week, you are more likely to find LeBron here in Cleveland, than the uncomfortably familiar imagery of police clashing with the populace.

We want to thank our partner -- WCPN ideastream -- for sharing their space with us this week.