It's official. Jewish women are coming out. Seeping onto the walls of galleries and museums for some time now, the trickle of provocative work by Jewish female artists of the Orthodox persuasion has turned into a flood.

First to tip the world off to the trend was the Mishkan Le Omanut in Ein Harod, Israel, earlier this year with a pioneering exhibit entitled "Matronita: Jewish Feminist Art." Curated by Dvora Liss and David Sperber, and named for the eponymous "woman of integrity" (referred to in the Jewish Talmud as a woman accorded great respect and the right to question authority), Matronita showcased work from Orthodox female artists dealing with the dissonance between Halacha (the Jewish code of law as sourced in the Bible) and contemporary life.

In a phone interview, Liss, herself an observant Jew, explained her decision to exclude secular (Jewish) female artists in a clear effort to reveal select nuanced controversies from within the sphere of observant Judaism. The result: a series of breathtaking creations mapping the territory that Jewish Orthodox women navigate daily. The familiar discrepancies are bared for all to see, landmarks in an ambiguous battlefield of laws eliciting misogyny, both implicit and explicit, a battlefield that demands a trio of grace, defiance and confidence from the Orthodox Jewess to overcome while she struggles not to compromise her identity (a compromise that would effectively dump her Jewish baby out with the sexist bathwater).

Greeting visitors to Matronita, New York artist Carol Hamoy's "The Invisible [Part of the] Children of Israel," features a throng of 1,000 transparent dresses in protest to the omission of women from written biblical texts. Described by Matronita artist Doni Silver Simons as "first a haze, than a cloud," and (finally upon approaching it) "a crowd of garments," the installation is a striking testament to the invisible yet necessary presence of Jewish women in the Orthodox community.

Silver Simons' work treats a different kind of invisibility: silence. Her installation of transformed and transmuted tambourines comments on the recent re-enforcement by rabbinic authorities of a millennia-old injunction against women singing in public (lest their voices sexually arouse a male auditor). For lack of a voice, or perhaps in ironic lieu of one, contemporary Israeli women have taken up tambourines as arms in their battle against the suppression of the female voice. The tambourine as voice-elect asks how the same Bible, which depicts Moses' sister Miriam leading Israelite women in song and dance (in praise of G-d's effecting their safe passage across the Sea of Reeds), can prohibit the free and joyous vocal expression of Jewish women today. Silence is a common motif in Silver Simons' work. Often charging the atmosphere with an ether-like tension in her meditative, interactive performance art, Silver Simons affects a muted, hushed style to expose the intensity of personal experience hidden in our seemingly simple gestures and collective social rituals.

Other Matronita artists are less subtle. Like Jacqueline Nicholls. To someone unfamiliar with the Talmud, Nicholls' work may be tough to decipher. Her "Ghosts and Shadows" series, exhibited this fall by curator Meg Whitman at the JCC in Manhattan, illustrates Talmudic excerpts bringing to light the stories of anonymous women who subverted rabbinic reasoning and provoked unexpected tours de force in their respective narratives. Nicholls embroiders these multi-layered compositions of translucent fabric sheets with the outline of each anecdote's respective source text (Vilna Talmud), superimposed with interpretive silhouettes taken from the stories' events. Similarly suggestive are several excerpts of Nicholls "Ladies Guild" series currently being featured in curator Laura Kruger's "Sexuality Spectrum" at Hebrew Union College. These provocative paper-cut doilies depict misogynistic passages from the Talmud that appear problematic to the empowered Jewish woman.

Somewhat like Nicholls, but with an added element of geo-politics mixed in to the already thick fusion of gender-, identity- and religion-politics is Andi Arnovitz. Her "Delicate Balance," a 14' multimedia installation along the length of the narrow corridor leading to the Mishkan Le'Omanut's Judaica wing, leaves visitors no choice but to navigate the suspended jungle of wind-chimes-with-attitude hanging from a grid in the ceiling. Each of these hundreds of iron rods is adorned with two ceramic scrolls that, according to Arnovitz, "dance the dance that Israel does every day." The kiln-fired scrolls are stamped with texts from the Talmud and paired with a correlating scroll engraved with a contemporary newspaper article. For example: a scroll stamped with an article about Gilad Shalit's return is paired with a source text describing the commandment (mitzvah) of the return of a captive, know as Pidyon Shvuyim. Also currently exhibited in "Sexuality Spectrum" are Arnovitz's "4% of Us" and "Counting Your Eggs," both pieces commenting on infertility issues brought on by the observance of Jewish laws pertaining to intercourse.

While Matronita's artists struggle between co-existing traditions of female silence and defiance in Judaism, Jewish artist Ofri Cnaani's "Sota Project" nimbly sidesteps the tightrope and goes straight for the guttural, exposing the arguably female system-within-a-system contained within Judaism, a silent meta-tradition transmitted in parallel to the male-dominated oral and written codes of law.

The "Sota Project," a video work installed until recently at USC's Fisher Museum, references a passage from the Bible describing the fate of a Sota -- a woman accused of adultery by her husband. The Sota must undergo a particularly humiliating ritual that, if guilty, will cause her to die by an explosion from within her womb. If acquitted, she will conceive and give birth within 10 months. Cnaani has created a hybrid narrative, combining the Torah and Talmud's controversial texts with that of a midrashic (mythological) Sota character, who swaps roles with her sister in order to avoid the potential outcome of the ritual.

Cnaani does not take care to maintain reverence toward any aspect of this biblical narrative. Rather, she exposes how Jewish women have and will contrive to subvert the male-conceived rituals imposed on them. Placing a chorus of concerned, elderly Jewish grandmothers -- huddling their immersed aged bodies replete with aqua fitness paraphernalia -- opposite a jury of male-sexualized bathing beauties, depicted, as they would appear -- alluring objects of temptation -- to the type of man who would accuse them of indecency, Cnaani pits the two predominant female archetypes against each other. Will the real female please stand up? Is it Bubbe or Femme fatale?

While Cnaani conceptually conflates disparate cultural and mythological references a la Eleanor Antin, the provocative nature of her work recalls Rachel Lachowicz's edgy performance at Shoshana Wayne Gallery (c. 1992) wherein she smeared male nudes with melted lipstick, flipping conventions of the Yves-Klein-kind on their head. Like Lachowicz, Cnaani challenges her source material by inverting the superiority complex of misogyny, imposing female action on male passivity. Explicit, to me at least, in the Sota Project, is Cnaani's redemption of the proto-woman's loss of dignity.

Somewhere in between Cnaani and Hamoy, Nicholls and Arnovitz, stands artist Helene Aylon. Aylon is their senior, predecessor, a pioneer of the feminist era, born and bred into an Orthodox family, and the originator of the genre in question. At a recent book reading of her newly released memoir "Whatever is Contained Must be Released," Aylon told of her father's reaction to her birth "Naturally, my father, Anshel, had hoped for a boy..." Why? Quoting from the Talmud, she continued "A daughter is a deceptive treasure to her father because of anxiety on her account ... when she is young, lest she be seduced; when she reaches puberty, lest she play the harlot; after she is grown, lest she fail to marry..." Harsh words for an emancipated woman to sit idly by. And she didn't. Instead, Aylon became a major driving force behind Jewish feminism. Sharing images from her Wrestlers series at her book reading, Aylon points out that these large-scale landscape photographs resembling the female anatomy, if looked at closely, reveal a minuscule figure (herself) scraping around in the sand of the desert, in quest of the unnamed matriarchs of the Bible. Aylon's work casts the foundational imprint of Jewish feminist art, one that echoes throughout Matronita and beyond. It is the quest of the elusive Jewish female, in quest of herself.

This theme, along with the repurposing of objects and the reinterpretation of craft-based techniques or forms gleaned from the traditionally female realm of garment creation, suggest a resemblance to the work of other-ethnic feminist artists, such as Asian-born Chiharu Shiota and Lin Tianmiao. Currently on view with a solo show at Galerie Lelong in New York, Tianmiao's exhibit "Badges" features hanging hoops of varying sizes embroidered with multi-lingual phrases spanning the gamut of stereotypical terms used to refer to women. Picking up where artists like Elaine Reichek and Ghada Amer have left off, Tianmiao creates a double-entendre referencing a traditional female industry that (on the surface) appears to reinforce social conventions while simultaneously emancipating the subjects of those same conventions tongue-in-cheek. The more romantic Shiota, poetically weaves thread and found objects into complex three-dimensional mazes of memory and confinement. But when interviewed, Tianmiao and Shiota both purport to negotiating personal, as opposed to communal, agendas.

Here the similarities end. Yes, it may be true that in using women's crafts to riff on the state of contemporary feminism lies the ubiquitous ironic twist of all neo-feminist art. However, whereas other-ethnic female artists may blur their identity politics into the personal, Jewish contemporary feminist art is irrevocably intertwined with a single cause: the redemption of Eve. The Jewish female in quest of herself is the Jewish female in quest of her female ancestors' redemption.

She understands that she too is a matriarch, and as such, she is concerned with the redemption of the proto-woman's loss of dignity. She is concerned that future generations of women will not understand what made Eve eat from the Tree of Knowledge. Or why Cnaani's Sota dared to switch places with her sister. Or why Rebecca chose to defy and trick her husband Isaac. Or how Judith dared to murder Holofernes. She is concerned that future Jewish women will forget how to remain emancipated and empowered; that they will stop transmitting their own Torah. And she is concerned that men will continue to misconstrue female actions and lay the blame for the ills that plague the world at womanhood's feet.

Jewish Women, as Jonas Salk would say, are ever so concerned with the responsibility of being good ancestors. 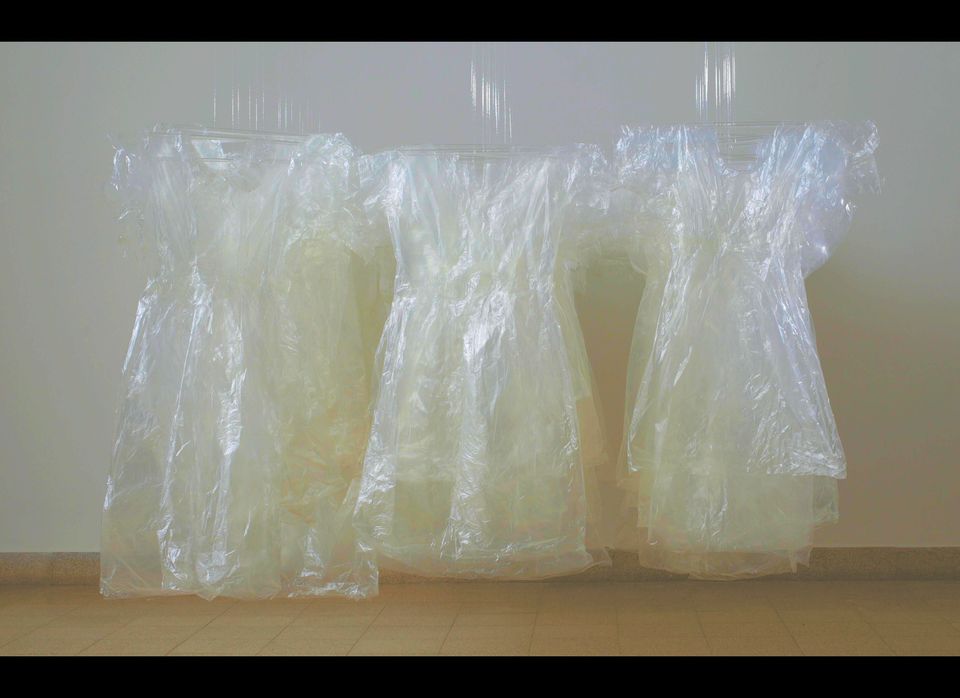 1 / 23
The Invisible Part of the Children of Israel
Courtesy of Artist - Carol Hamoy - and the Mishkan Le'Omanut, Ein Harod, Israel.