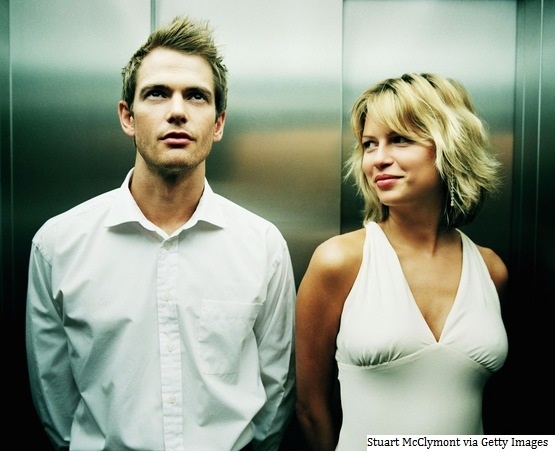 The statement, "Dad, Antonio is performing again" always makes me smile and laugh. It's what Gianna says when she notices her brother Antonio flirting with one of her friends. She uses "performing" instead of "flirting", but make no mistake about it, he's flirting and he's been doing it since he was two or three years old.

The dictionary defines flirting as behaving in a way that shows a sexual attraction for someone but is not meant to be taken seriously. That definition may be accurate for innocent flirting, but we all know that some people have bigger intentions. Many people flirt to explore the potential for a romantic or sexual relationship. And when that happens outside of a committed relationship, the line between innocent fun and intentional infidelity is blurred.

So, why do committed people flirt? When should a committed person (or their partner) become concerned that flirting has gone too far? This article explains the various types of flirting and alerts you to four signs that your 'flirting' is 'flirting' with cheating.

Northern Illinois University professor David Dryden Henningsen, a leading researcher on flirting, offers a comprehensive definition. He defines flirting as ambiguous goal-motivated behaviors that can be, but are not restricted to being, interpreted as sexually motivated. This definition emphasizes flirting's goal-motivated and ambiguous nature as essential characteristics. It's these motivations and intentions that distinguish playful flirting from acts of infidelity. Dr. Henningsen has identified six motivations for flirting as follows:

This is playful bantering and teasing that's enjoyable to both parties and motivated by fun. It's a harmless and innocent activity that makes neither party uncomfortable.

Healthy flirting between partners who seek to intensify the intimacy in their relationship.

When flirting is well-received and reciprocated it feels good and might boost self-esteem. So, men and women engage in flirting because it is flattering and makes them feel attractive. People also flirt to compliment or make another feel better about themselves.

This is flirting used to persuade someone to do something for you. As one of my friends pointed out, "I might flirt with the bartender to get my drinks quicker, but that doesn't mean I want to go home with him."

The ambiguous nature of flirting makes it easy to indirectly convey romantic or sexual interest with a lowered risk of rejection. So, men and women flirt to gauge, test, and explore whether another person is interested in beginning a relationship.

This is flirting motivated by a desire to facilitate sexual contact or a sexual relationship.

Couples have varying degrees of comfort with flirting. The playful bantering among friends that one couple finds amusing is uncomfortable and threatening to another couple. That's why it's important to talk to your partner and agree upon boundaries acceptable to you both. And if either partner violates a promise or commitment you've made to the other, then you have a problem regardless.

It's obvious that flirting motivated by romantic or sexual desires crosses the line into infidelity. But that's not usually the way it begins. Often, flirting begins innocently and progresses, blurring the line between harmless fun and inappropriate behavior. That said, here are four 'not so obvious' signs that flirting has gone too far.

When You Think About Flirting With the Same Person

Let's face it, flirting is fun and can make us feel good. But daydreaming, reminiscing, and looking forward to playful flirtations with one person is a sign that more is developing. Ask yourself this question, "Do you often catch yourself thinking about your flirtatious friend when they're not near you?" If you answer, "Yes", it's time to reevaluate your friendship.

When You Keep Your Flirtatious Behaviors Secret

If the flirting is kept a secret from your partner, family, friends, and co-workers, ask yourself why? Not telling your sensitive partner about the hunky UPS person you flirt with is one thing. But when you're uncomfortable telling your best friend about your flirting, you've probably crossed the line.

When You Feel Guilt-Ridden

Would your partner feel betrayed if they could read your mind and experience your feelings when you are flirting with your friend? Are you guilt-ridden after flirting because you enjoyed it so much? If so, perhaps your friendship is bordering on inappropriate and it's time to stop now.

We all need the love, acceptance and appreciation of another person. And when these intimacy needs are not met, we are lonely, regardless of our relationship status. Loneliness is your heart craving for intimacy and connection but having not having anyone willing to connect. This can certainly occur when we are single and alone, but it also occurs in relationships where one or both partners are emotionally unavailable.

Friendly bantering and flirting can get us to open up and share more of our thoughts and emotions. What starts as a playful friendship then becomes the foundation of an emotionally intimate relationship. If you find that you share more of your emotions with your flirtatious friend because they understand you better, you've already moved into dangerous territory.