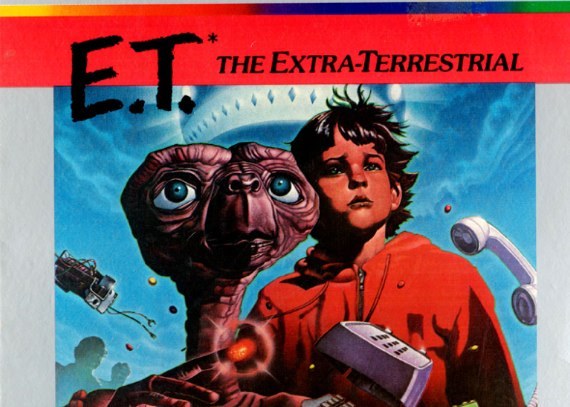 "Remember This?" is a new feature on HuffPost Entertainment resurrecting pop-cultural artifacts that haven't enjoyed the spotlight for quite some time. This week, for E.T. the Extra-Terrestrial's 30th anniversary, Mike Ryan writes about the terrible E.T. Atari 2600 video game. If there's a topic you want us to cover, let us know in the comments.

The worst Christmas present I ever received was the Atari 2600 cartridge of E.T. the Extra-Terrestrial. (Barely topping a Kansas City Chiefs jean jacket that featured the Tasmanian Devil.) Look, I realize that there are children who receive coal for Christmas, or whatever. But at least there are no expectations with coal. And, let's be honest, most children who receive coal probably deserve it. No child deserved the E.T. the Extra-Terrestrial video game.

This week is the 30th anniversary of E.T. the film. Which, unlike the video game, was very good. In early 1982, the early print advertisements featured nothing more than two fingers, one human, one alien, touching -- a soon-to-be-iconic image that sparked the interest of seven-year-old me. I remember asking my mother, "Do you think it will be like Star Wars?," to which she responded, "That's just an ad for a television show called Entertainment Tonight." This led to public ridicule when I would boast, "Yeah, I've seen E.T. ... more than a few times. Mary Hart is great." (There was also a time when I handed out the Easter Bunny's phone number at school -- who, coincidentally, had the same phone number as my grandparents. The lesson of all of this: I soon stopped trusting everything my parents said.)

Regardless, when I finally saw E.T., it was a wonderful experience. I mean, I was an adolescent boy, so of course it was. (Hold these thoughts for a couple of paragraphs.)

As it turns out, 1982 was also the year that my parents bought me an Atari 2600. In those days, I was in love with the arcade game Pac-Man. I begged my mother for quarters anytime I spotted the machine at the grocery store or Godfather's Pizza. I even created cut-out versions of Blinky, Pinkly, Inky and Clyde using a combination of crayons and something called Big Chief paper. In early 1982, a cartridge of Pac-Man was released for the Atari 2600. I had to have this. For my birthday, my first present was the Pac-Man game. "But, Mom and Dad, I don't have anything to play this on!" They fooled me! My next present was the Atari 2600. Hey: I could finally play Pac-Man at home!

Boy, what a shitty game that was.

OK, that's me 30 years later admitting that fact. And it was shitty. It was nothing like the arcade version. But, the only reason that I bring any of this up is because, even though the home version of Pac-Man was absolutely terrible, I played it day and night. Day and night! In other words, I was very easy to please.

In December of 1982, right in time for the holiday season, the Atari 2600 version of E.T. was released. God, I wanted this game. I loved the concept of playing a video game based on a character that I had seen (and loved) in a movie. I already had The Empire Strikes Back, but in that game I was just a faceless snowspeeder -- I couldn't really be a character. I did like to pretend that Pitfall Harry was Indiana Jones, but that just wasn't quite the same. I mean, with E.T., I would be able to be E.T.! I would be in charge of getting him home! I wish I had a video of my eight-year-old self playing E.T. on Christmas morning. I'd put it on YouTube right now with the headline, "Eight-year-old can't get E.T. out of a fucking pit."

If you're not aware, the E.T. video game is not just cited as one of the worst games ever created (a short development time leading up to the holiday season is often to blame); it's also blamed for almost ending video games. Yes, video games in general. Almost ended. It's that bad.

Doing a bit of research, yes, apparently there is an actual strategy to E.T.. But, as an eight-year-old, it really could have been titled, I'm Sad Because I Fell Down the Pit Again. In a nutshell, E.T. has to collect pieces of a telephone so he can call a spaceship to pick him up and take him back to wherever E.T. came from. The pieces of the phone were hidden in pits. These pits were next to impossible to escape from. This video pretty much encapsulates what December 25, 1982, was like for me:

I have to admit, I feel like a bit of an ass. In a week that we are all supposed to be celebrating this great film -- and it is a great film! -- the strongest memory I have of E.T. is how the E.T. video game -- a game that should have been really great -- became the first product of the world of popular culture to let me down. (Unfortunately, there were many, many more to come.) All that I ask is that you don't judge me unless you've actually played this game. And if you have, well, I have a question -- how do I get E.T. out of the pit?