Corporations, like cultures, cannot skip a development stage. Life conditions in the Middle East have remained at tribal levels with egocentric overtones, which have resulted today in the sweeping revolutions of the Arab Spring. Corporate cultures in the Arab world were no exception to these values, but women and the millennial generation are changing these patterns and investing in human capacities that will outlast the Age of Oil.

I have been working with Middle Eastern corporations for over a decade as a consultant and advisor to business founders and CEOs. Over the years, I have seen corporate training seminars delivered by Western consultants and trainers with the same exact content as it was delivered in the West as if the region were an extension of Anglo-Saxon values that just needed to catch up. Even the best theories from management science fall short on achieving the intended results if they are not tailored to the memetic contours of each culture. In contrast, my approach honors all cultures, value systems, and takes into consideration the environment and habitat in which they operate. 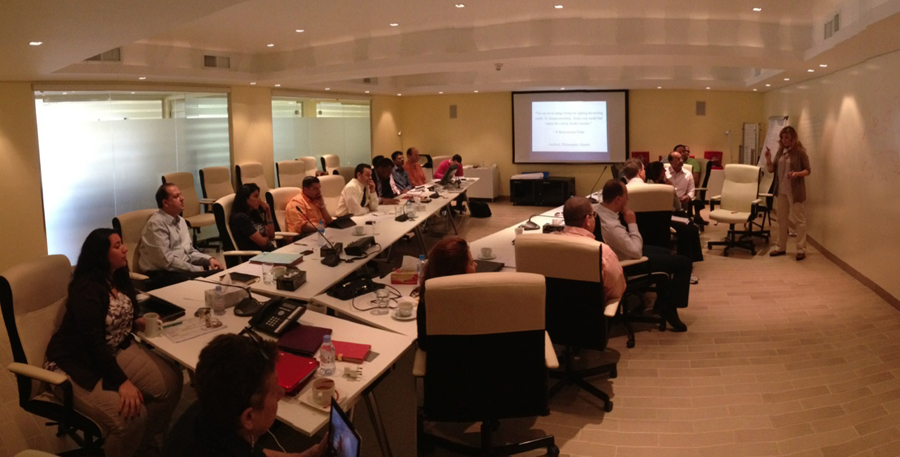 Specifically, the framework I use originated from the emerging science of memetics based on the seminal work of Professor Clare Graves of Union College and his successor and colleague Dr. Don Beck. A meme is like a gene that contains units of cultural information. Memes form into general groupings such as politics, language, economics, religion, education, health care, architecture, etc. The natural organizing principle that brings these grouping together is called a value-system or vMEME. According to Spiral Dynamics Integral, the work developed by my business partner Don Beck, there are eight known value systems that define the human evolutionary process called "levels of existence." When we solve the problems of one stage of existence, we create the problems for the next level. Thus, the evolutionary pulse of human nature and culture keep the chaos of existence in balance in an endless quest towards higher meaning and purpose. 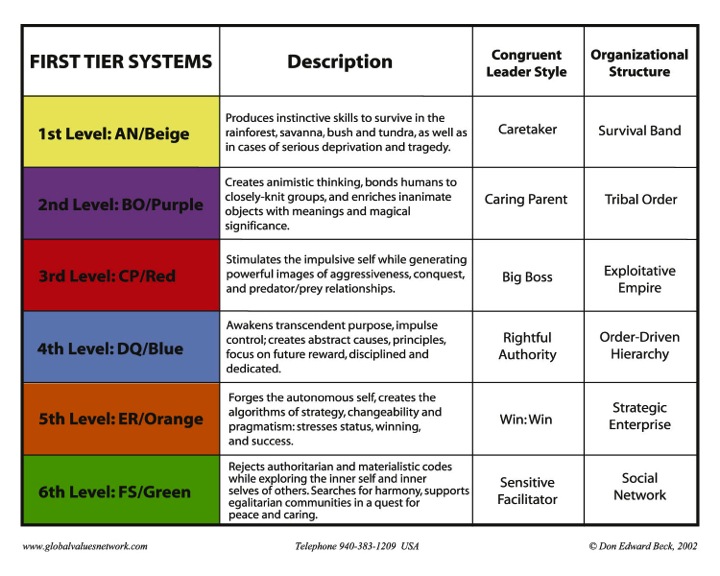 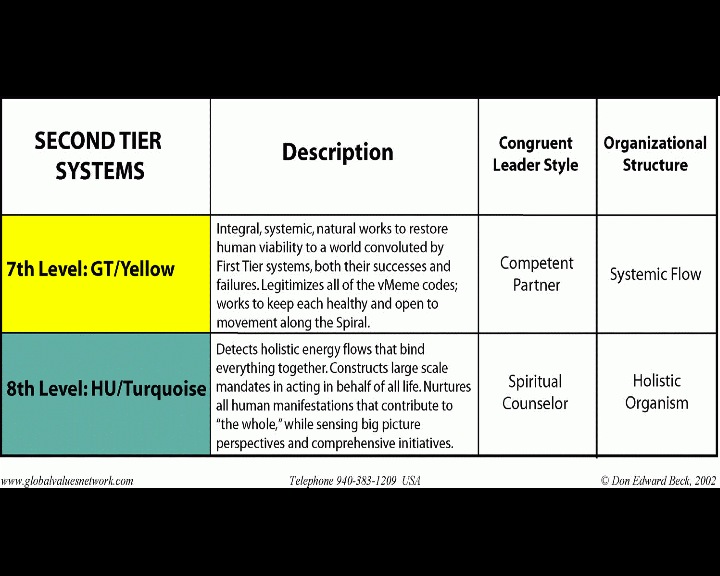 My philosophy towards corporate consulting is an unconventional one. I have been using this whole-systems approach to bring purposely slow but sustainable change to Middle Eastern corporate practices with an eye on a new era that goes beyond the Age of Oil. My goal is to support Arab businesses and governments to focus on their most valuable resources: the millennial generation and women. The next stage of development for the corporate world in the Middle East is self-reliance, gender equality and non-discriminatory practices against the young generation.

One of the very first things I do, is to determine the different levels of development in people and corporate practices in relation to where the culture is centered. While the Middle East seems to be centered around the Tribal-Egocentric value systems, the second and third levels, Strategic Enterprise values are emerging with their own indigenous content. New and old businesses are changing their ways in the Middle East, led by visionary leaders who are evolving best practices within their own companies, influencing and being influenced by the emerging Enterprising levels in emerging markets around the world. If this sounds like best practices of global corporations, it is. And it's being brought to the Middle East by a new generation of business owners who see value in approaching business practices from an integral perspective. These business owners are educated in the best Universities, and have little tolerance for stereotypical views of Arab business.

A BUSINESS WITH A FUTURE

I introduced this approach with a long-term comprehensive plan a few years ago in a multinational, mid-size Kuwaiti corporation with 6,000 employees and operations in Europe and the Middle East. The Chairperson, who is the co-founder of the company, was seeking a whole-systems approach to her company and team's development to compete in the 21st century. She took the initiative to attend many seminars, including Spiral Dynamics Integral and various integral trainings, and found it necessary for her top executives to attend intensive training seminars offered by me and the main architect of this framework, Dr. Don Beck. This was a necessary undertaking that exposed her key executives to an early glimpse of what was to come. My journey with the company was an upward one, emerging along the spiral of life and higher business values. None of this would have been possible if it weren't for the visionary leadership and bravery of the Chairperson.

This corporation has substantial holdings in fast food and casual dining in franchises as well as homegrown concepts, and dealt with global partners on routine basis. When the Chairperson founded the company she developed best practices based on her own innovative ways and years of research of businesses that were on the leading edge of corporate practices. Like most company after three decades of success, people and systems will need a boost of new blood and new systems to help the corporation emerge to where it needs to be. This is when the Chairwoman stepped in as a CEO, and together we started the journey to take the company to the next level. We diagnosed some of the issues that will allow the company to move forward. These were normal practices in many medium to large size companies around the world, however the CEO had a larger vision to strive for global excellence, with a world class team.

Visionary Integral leadership develops indigenous practices that fit the lay of the land of societies and look for ways to make these practices resilient. This was the type of leadership I had working on my side. Together we designed a comprehensive long-term plan that would functionally re-align all the jobs for the future "pull" with a new company mission. In the words of Buckminster Fuller, we were designing a new system that made the old one obsolete. The change we took on had to have indigenous content in targeting the best interest of the customer while aspiring to meet the same metrics and best practices. It is important in the Middle East for a business to uphold the warmth and sweetness of family values while remaining committed to the bottom line. The Enterprising system in the region is emerging with a tender communal feel that honors tradition and respects values of hospitality.

After deciding what kind of change the company needed and identifying the outcome we wanted to target, we embarked on both evolutionary and revolutionary change. Together with the senior leadership, we spent three years "righting the ship" to establish order and structure in the company to mitigate any global wildcards. Within the first few months of implementing the vision, many of the practices were changed and replaced with 21st Century Integral practices. Rigorous key performance indicators were introduced in every department to ensure alignment toward the company's roadmap. During this crucial phase, everyone stepped up and took accountability for the next journey in righting the ship. The CEO was adamant about sharing and including the teams across the board to participate and own the change. As such, the team had a tremendous sense of ownership and ingrained sense of loyalty in wanting to see the company through its next phase of evolution.

By nature, the Enterprise fifth level system is optimistic, and seeks to uncover the mysteries of the universe through objective observation and scientific rigor. These were the qualities of the new management team that set us on the course towards transformation. We uncovered hidden talent within the company. Enthusiastic workers with management capacities who were behind the counter were placed on a fast career track to become store managers. Matching talents to jobs created such a dynamic work environment that productivity and job satisfaction hit all time highs within a few short months. A process of internal debate continued, where systems and processes were constantly updated and adapted to the waves of change. With an open and flexible culture led by executives aligned with the company's mission, we continued to see improvements in sales and bottom line returns, but also in the happiness of team members.

Over the few short years since the beginning of my involvement, the company's transformation of top management is close to complete. We continue to provide a truly integral approach to our commitment as new management recruits are indoctrinated into the company whole-systems culture. A big part of the CEO's vision for her people was to create what Jean Houston calls a habitat for human potential where everyone could come to work as a whole person. As such and as an evolutionary leader who believes wholeheartedly in transformative practices, corporate training is not limited to the newest advances in management science. With the CEO's encouragement, I lead executive teams into multi-disciplinary training focused on the whole person. This including training in depth psychology, integral emotional intelligence, relationship training and parenting, and the mythological meaning of the Hero's Journey in business and culture.

These are the type of whole-system skills that the region needs to develop in order to compete with emerging markets. A recent conference in Doha, Qatar, highlighted the urgent need for the region to start to focus on its resources beyond the age of oil. The most precious of that resource is the human resource. The development of human capacities has always been the key that transitioned cultures to advanced economic stages. This transition starts with the commitment to transform existing practices at the organizational and personal levels that will eventually lead to national and regional transformation. My business partner Dr. Beck focused his efforts on transforming businesses in the extractive industries in South Africa as a strategy to help the country transition from Apartheid. In the Middle East it starts with visionaries like our CEO before the practices reach a tipping point where the entire region can be transformed.

This transformation won't be easy. What we achieved in this corporation was what we call Second Order change that is both evolutionary and revolutionary and required rigorous implementation for a period of five years. In the end, it proved to be the cutting edge that represents the future of corporate management in the Middle East and emerging markets. It combines best practices and integrates them into a whole systems approach that brings resilience to the forefront. This type of transformation is rarely achieved if ever because it requires the coalescence of power, authority and influence of all the stakeholders within the corporation. This is precisely the kind of bravery the region needs to become a serious contender in a highly competitive global economy.