Rikki Poynter may have begun her YouTube career as a beauty vlogger, but her work on camera has recently broadened to include an issue that's close to her heart.

In honor of September's Deaf Awareness Week, the makeup enthusiast from North Carolina recently uploaded a 20-minute-long video addressing some frequently asked questions about the deaf and hard of hearing community. It's the first video Poynter has made in which she talks about being hard of hearing herself.

In the video, she delves into a range of challenges facing the deaf community. Some of those challenges are specific to YouTube; others, like harassment and employment discrimination, are very much not.

For example, Poynter says she's been applying to jobs for four years and has only gotten a single interview. Her experience, she suggests, is representative of what many other deaf and hard of hearing job applicants may face in their lives.

So far, she says, she's been well-received.

"I’ve wanted to do a video like this for a while, but I [was] too scared of how it would be received. I was afraid of so many audist comments so I figured I should just stick with makeup videos," Poynter told The Huffington Post via email. "Surprisingly and fortunately, all the feedback I’ve gotten is positive!"

Poynter's focus might be shifting, but don't expect her to abandon eyeliner and eyeshadow entirely.

"I love how makeup can look so cool, so pretty, and really change a person’s face. I love how creative you can get with it. Before I actually got into makeup, I thought it was just putting on some foundation and calling it a day, but there’s so much more," she told HuffPost.

If one of her goals is to raise awareness for what she calls a "hidden disability," her online presence, mixed with the vibrant colors showcased on her Instagram page, makes it pretty hard to look away.

This Beauty Vlogger Is Hard Of Hearing, And She's Stepping Up Her Game On YouTube
Deaf Kids Hear For First Time 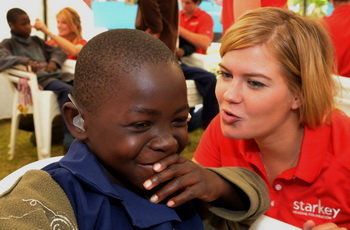