This is the first time a spacecraft has ever landed on the surface of a comet. The mission was ten years in the making.

EU science chief Anne Glover tweeted that, "I think Europe just boldly went where no one else has gone before."

Philae touched down on an area of the comet named Agilkia, using harpoons and screws to latch on to the surface.

To see a minute-by-minute recount of the historic landing, check out HuffPost Science's liveblog. 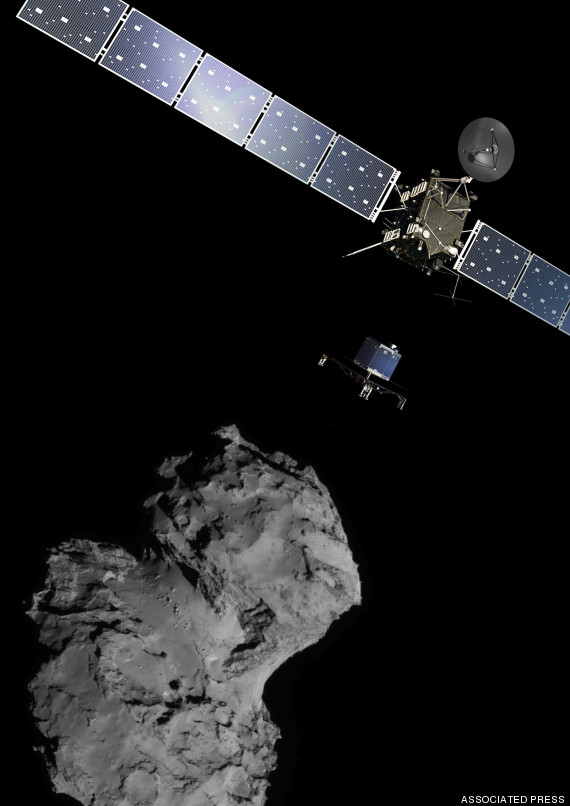 Here's a timeline of the spacecraft's historic mission, courtesy of the AP:

DARMSTADT, Germany (AP) — The European Space Agency said it landed a spacecraft on a comet Wednesday for the first time ever. The Philae craft pulled off the audacious landing hours after it was released toward the giant ball of dust and ice by the unmanned Rosetta space probe.

The landing is the highlight of a decade-long mission to link up with comet 67P/Churyumov-Gerasimenko.

Here's a look at key moments during Rosetta's incredible trip:

March 2, 2004: Europe's unmanned probe Rosetta takes off from Kourou, French Guiana, after a series of delays, including an abandoned January 2003 launch window because of a rocket problem.

Feb. 25, 2007: Rosetta carries out a close flyby of Mars. European Space Agency's mission control breaks out in applause after the end of 15 tense minutes of radio silence as the craft passes behind the Red Planet.

Sept. 5, 2008: Probe successfully passes close to an asteroid 250 million miles from Earth. The spacecraft loses its radio signal for 90 minutes as planned during the flyby of the Steins asteroid, also known as Asteroid 2867.

July 10, 2010: Between Mars and Jupiter, Rosetta transmits its first pictures from the largest asteroid ever visited by a satellite after it flies by Lutetia as close as 1,900 miles (3,200 kilometers). It is the closest look to date at the Lutetia asteroid.

Jan. 20, 2014: Waking after almost three years of hibernation, Rosetta sends its first signal back to Earth. Systems had been powered down in 2011 to conserve energy, leaving scientists in the dark for 31 months.

Aug. 6, 2014: Rosetta swings alongside comet 67P/Churyumov-Gerasimenko somewhere between the orbits of Mars and Jupiter.

Nov. 12, 2014: The probe releases the Philae lander and it drops to the comet's surface. Seven hours later, Philae touches down on the comet.