Lavinia Warren Stratton and Charles Stratton -- 32 and 36 inches tall, respectively -- were the most famous couple in America back in 1863. Their wedding captured a nation's imagination like no other wedding in America's history, before or since. While researching my upcoming novel, The Autobiography of Mrs. Tom Thumb, I was charmed to discover that Astors and Vanderbilts fought to be invited; P.T. Barnum sold tickets to their reception. And even in the midst of the darkest days of the Civil War, Abraham and Mary Lincoln invited them to the White House for their honeymoon. 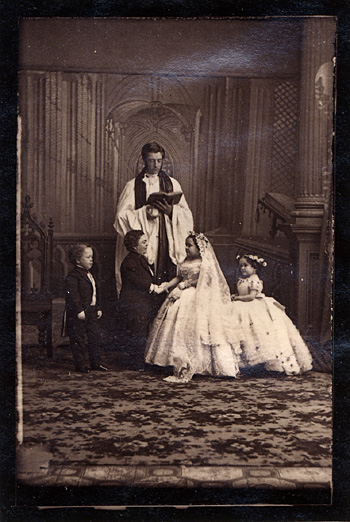 1863 was a tumultuous year in American history; the year that would see Gettysburg begin with the official passage of the Emancipation Proclamation. While the Civil War continued its bloody progress in the south, up north, New York was seething with unrest; the war was not popular there, as a host of "Copperheads" -- Northerners sympathetic to the Confederacy -- stirred up trouble. The impending draft, which excused any gentleman who could afford to pay the $300 commutation fee, further divided the populace.

But in February, an event took place that knocked all news of the Civil War off the front pages -- the wedding of Mr. and Mrs. General Tom Thumb.

The "Loving Lilliputians," the "Little Queen of Beauty" and her "Fairy Prince" -- all of New York society clamored to be invited to their nuptials. Every lavish detail of Vinnie's dainty trousseau was reported; her exquisite gown was made by one of the most famous dressmakers of the time, Madame Demorest. Among their wedding gifts was a miniature silver horse and chariot, presented by Tiffany and Company, as well as a pair of slippers embroidered by the actor Edwin Booth.

And a grand reception was given in their honor in the Blue Room of the White House, where President Lincoln himself kissed the blushing bride -- probably to her annoyance, as she disliked men taking such liberties. Only 32 inches tall, Lavinia Warren Stratton fought against such behavior all her life; men were forever treating her like a doll, or a child to be petted -- or a sexual curiosity. When in reality, she was a proud, upstanding descendant of the Mayflower, a school teacher -- and the most ambitious woman of her time. She left her loving home at 17 to seek her fortune, first on the seedy riverboats of the Mississippi, then, under the management of P.T. Barnum, in the lavish drawing rooms of New York Society.

Her husband was more genial; discovered by Barnum at the tender age of five, he'd spent his entire life pleasing people on the stage, and off it. He claimed to have kissed more than a million girls by the time he was 19.

Their elaborate wedding at Grace Episcopal Church on February 10th, 1863, was the gift of their great friend (and greater showman), P.T. Barnum, who took credit for playing matchmaker to the pair (although I have a feeling Vinnie herself realized the box office potential of not one, but two perfectly matched little people; despite the flowery Victorian language of the time, the jury is still out as to whether this was a love match or a brilliant business decision).

The country was simply enchanted by this miniature couple, apparently struck by Cupid's dainty arrow; it was the perfect antidote to a nation weary of war and strife. For a few days, anyway, the entire nation could open the newspaper and not be confronted by casualty lists but, rather, flowery paeans to a true "Love in Miniature."

Vinnie and Charles remained married until his death in 1883; two years later she married another little person, an Italian count named Primo Magri. Their wedding -- at which the bride was given away by P.T. Barnum -- while highly publicized, failed to capture the nation's heart the same way her marriage to General Tom Thumb had; times had changed. The nation was more sophisticated, perhaps. Vinnie was no longer a star attraction; she and other curiosities like her were now relegated to the side show -- or as it was becoming more commonly known, the Freak Show.

Yet until she died, Countess Magri signed her letters as "Mrs. General Tom Thumb."

One strange legacy of America's Royal Wedding remains to this day. A few years after the wedding, a phenomenon began to sweep the land -- the "Tom Thumb Wedding." Staged primarily at churches and schools, often as fundraisers, children would dress up in wedding finery and be "married" by a "minister." While the popularity of these weddings seemed to peak prior to World War II, there are still Tom Thumb Weddings being performed to this day. Just this past week, while speaking with a book club, I met a woman who remembered being in a Tom Thumb Wedding when she was a child.

Vinnie herself never really knew how to view these staged weddings; were they tributes to her great love? Or mockeries?

One thing is for sure. Even in America, it seems, the idea of a royal wedding, albeit a miniature one, never goes out of style.


More:
StyleRoyal Weddingcharles and dianaP.T. Barnum
Newsletter Sign Up
An essential daily guide to achieving the good life
Subscribe to our lifestyle email.
Successfully Subscribed!
Realness delivered to your inbox

Author, 'Alice I Have Been' and 'The Autobiography of Mrs. Tom Thumb'